Whether you're testing local deployments to ensure that a containerized application is working as expected or you're looking to deploy a containerized workflow to production, you need an automatic way to complete these tasks.

Not to mention, you probably need a way to automatically build container images.

That's where Skaffold can come into play.

In this blog post, you'll learn about what Skaffold is and a few different ways that you can utilize it to make deployments easier.

To follow along from a hands-on perspective, you should have:

The idea for this project was for the continuous change in container images. Once code is updated, there needs to be a way to automatically update the container image. For example, if you're going from v1.1 to v1.2, you don't want to have to run docker build . on a Dockerfile manually. Instead, you want an automated way to build the new container image and have it deployed.

That's exactly what Skaffold does.

It looks at local or remote directories where code exists and if the code changes, Skaffold can automatically create a new containerized image and then deploy it to your Kubernetes cluster.

To push a container image to a registry, like Dockerhub, you’ll need to log into the registry and specify your registry in your Kubernetes Manifest, which you’ll see in the upcoming section.

Ensure that you log into your container registry on your terminal.

For example, if you’re using Dockerhub, run the following command:

Because Skaffold is made for Kubernetes and containers, you will need:

To keep the app simple (although this process will work with other apps as well), you can take the Go code below and store it in a directory.

In the same directory, create a new Kubernetes Manifest called goapp.yaml and store the following Manifest.

Notice how the app name is gowebapp. That piece of information will come up in the next section.

The code below installs Skaffold on a MacOS machine with an M1 chip.

Once Skaffold is installed, the app code is prepared, and the Kubernetes Manifest is written, you can start the process of using Skaffold.

First, ensure that you’re cd into the same directory as the app code and k8s manifest.

Next, run the initialization command.

You'll see an output similar to the screenshot below. Notice how it’s using the image name that you specified in the Kubernetes Manifest.

Skaffold is building the container image via a Cloud Native Buildpack, which is a way to build container images directly from code without needing a Dockerfile.

You’ll now see a configuration similar to the screenshot below in the same directory as your app and k8s manifest. It contains the container image name, the cloud native buildpack builder, and the k8s manifest. 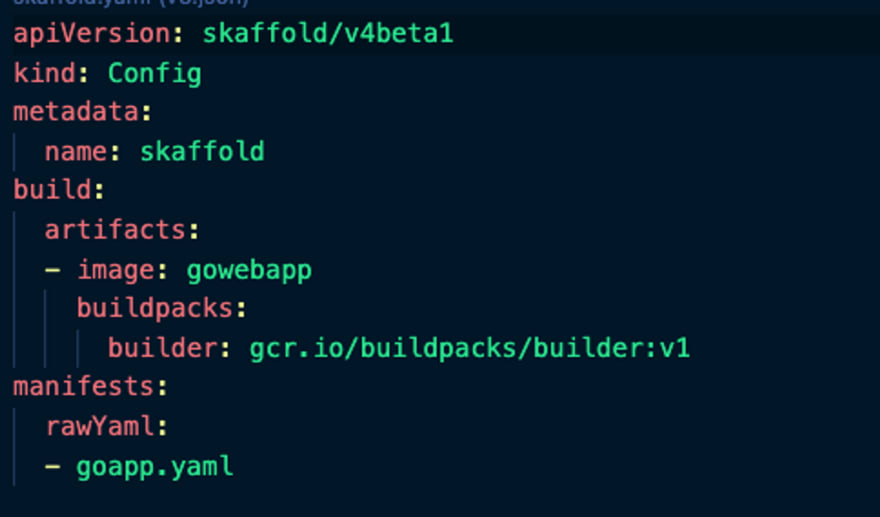 If you come across the skaffold run command and are wondering what the difference is, here it is: skaffold run builds and deploys once whereas skaffold dev triggers the watch loop build and deploy workflows.

You’ll see an output similar to the screenshots below which shows that the container image is being built for the Go app. 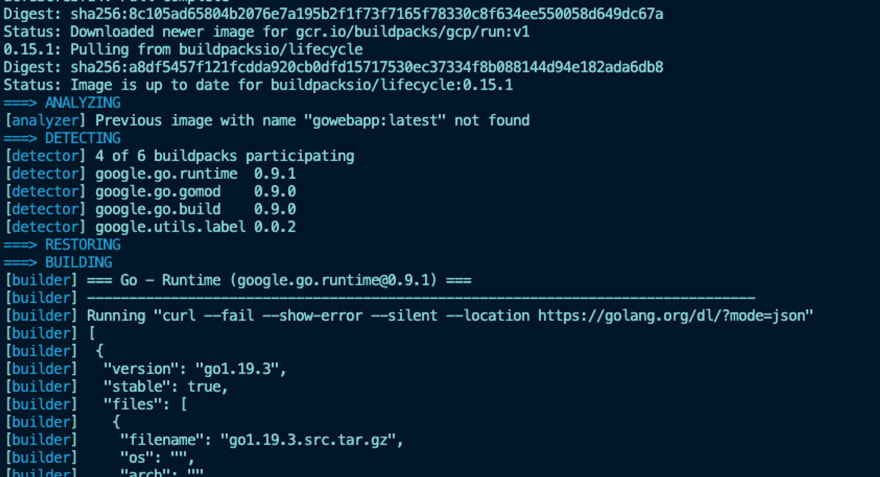 The whole build process should take a few minutes.