When you create any type of resource in Kubernetes, whether it’s a standard Pod, or a higher level controller that manages Pods like a Deployment or DaemonSet, the resource is deployed with a service account inside of Kubernetes.

Understanding what that service account does, and more importantly, the implications of using a service account to create Pods is crucial for any successful production deployment.

In this blog post, you’re going to learn about service accounts in Kubernetes.

A service account is how workloads in Kubernetes run. It contains RBAC permissions that give it the ability to deploy resources to a Kubernetes cluster. Service accounts are used to connect to the Kubernetes API server.

By default, when you create a Pod, the default Kubernetes service account is used.

Let’s say you have a Pod running, you can run the following command and see the spec.ServiceAccountName field.

The biggest reason is from a security perspective. If you’re using the same service account over and over again and that service account gets compromised, all of your applications are in big trouble. If a malicious entity obtains access to the default service account that’s deploying every workload inside of Kubernetes, that means it’ll ultimately have access to every Pod that’s running in the cluster. It’ll also allow any compromised Pod to run API calls against the cluster.

Another reason, although not as important as the security piece, is the cleanliness of the environment. Think about it like this - imagine every Sysadmin used the same email account for every single service that the infrastructure department uses or a developer generating and using the same API key for authentication across all applications. Not only is it a bad security practice, but it’s not a good practice in general.

Now that you know why you want to use a different service account other than the Kubernetes default, let’s learn how to set it up.

For the purposes of this blog post, you’ll create a service account that’s tied to a specific namespace.

First, you’ll need to create a namespace. The example below shows a namespace called levantest that you can create.

Save the Kubernetes Manifest namespace code below as namespace.yaml

The below YAML creates a service account called app1serviceaccount, gives it permissions to create, get, watch, and list, and binds it to the levantest namespace.

Save the Kubernetes Manifest below and call it serviceaccount.yaml

Run the following command to create the resource:

You should see an output similar to the screenshot below.

Next, let’s use the service account to create a Pod.

Now it’s time to create a Pod with the service account that you created.

The Kubernetes Manifest below creates a Pod resource that deploys a Pod running Nginx with no high-level controller (Deployment, DaemonSet, etc.) and utilizes the newly created service account.

Save the Kubernetes Manifest as pod.yaml

Run the following command to deploy the Pod.

Once running, you can see the output of the Pod to confirm it’s using the appropriate service account.

You should see an output similar to the screenshot below, which under spec will show the service account. 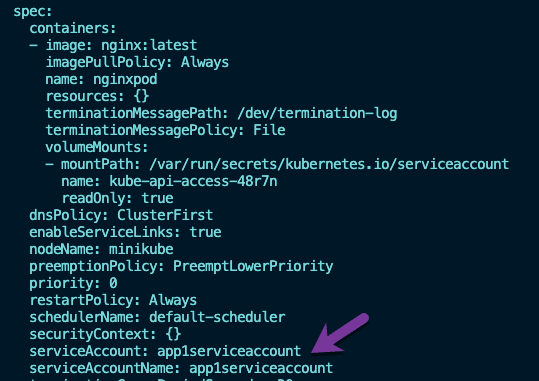 Congrats! You have successfully created and used a new service account for Pod deployments.

How to sign your commits with GPG or SSH keys