The React JS or React is an open-source, front end, JavaScript library for building user interfaces or UI components. It is maintained by Facebook and a community of individual developers and companies. It has grown as one of the best libraries in recent years for component-based GUI development.

Although, there are other front-end frameworks like Angular and Vue.js available, what sets React apart from others is, it just focuses on component-based GUI development and doesn’t invade other areas. 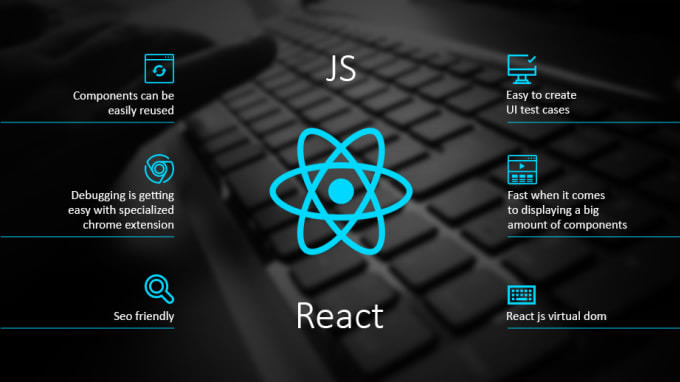 Roadmap to becoming a React developer:

Below is the chart demonstrating the paths that you can take and the libraries that you would want to learn to become a React developer. This chart is made by Adam Gołąb.

Note: This roadmap will give you an idea about the landscape and guide you if you are confused about where to begin or what to learn next. In the end, it depends on your experience as you will grow some understanding of why one tool is better suited for some cases than the other one. It is not necessary that handy and trendy one is always perfect. So, go through the map and start developing. 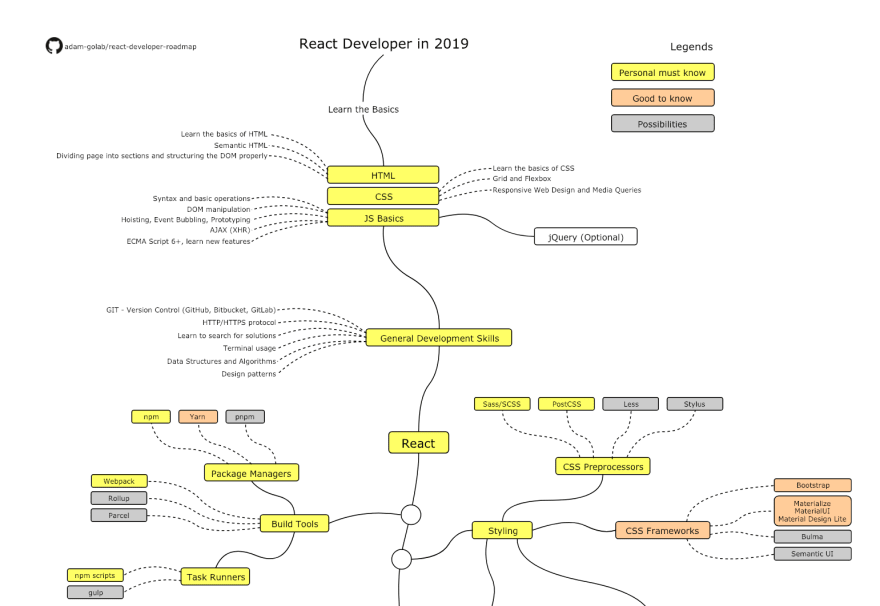 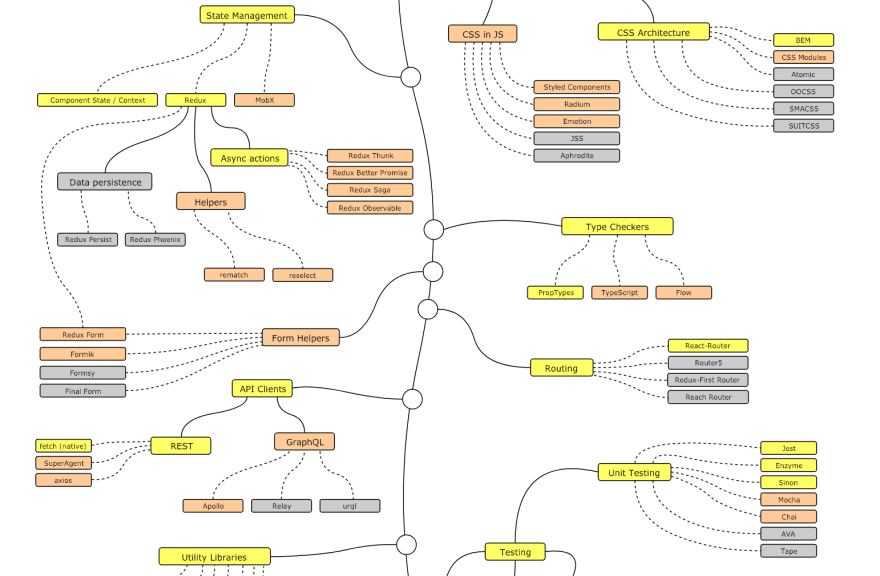 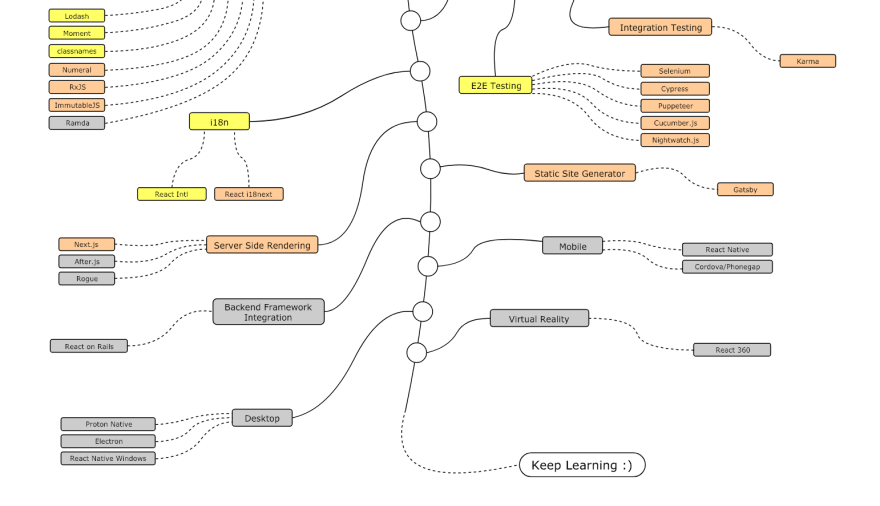 i. HTML: First pillar & the most important skill for web developers as it provides the structure for a web page.

You can check Tutorial For HTML.

ii. CSS: Second pillar of web development and used to style web pages so that they look good.

You can check Tutorial For CSS.

You can check tutorials for JavaScript

3. Learn React on the official website of ReactJS or complete some courses

4. Get familiar with the tools that you will be using.

To become a React developer, you should spend some time on learning tools that you will use as a web developer like built tools, unit testing tools, debugging tools, etc.

Here are some of the build tools:

A CSS preprocessor is a program that lets you generate CSS from the preprocessor's own unique syntax. preprocessors can make CSS code more organized.

You can check this comprehensive guide on Best CSS Frameworks In 2020 for detailed info.

Components are the main part of React's powerful, responsive programming model, and Routing components are an essential part of any application.

You can create something which communicates with other application using APIs like REST and GraphQL.

The following are some of the best ReactJS UI libraries and frameworks.

It is a vital skill for React Developers.

Both these library offers, React components, and an API to format dates, strings, and numbers, including handling translations and pluralization.

React components are rendered on the server, and the output HTML content is delivered to the client or browser.

You can use Gatsby to create a personalized, logged-in experiences website. They combine your data with JavaScript and create well-formed HTML content.

It integrates Rails with (server rendering of) Facebook's React front-end framework. It provides Server rendering, which is often used for SEO crawler indexing and UX performance, and not offered by rails/webpacker.

The standard way to develop a mobile application in JavaScript with native look and feel.

Allows you to build native UWP and WPF apps with React.

You can check Vuexy React Admin Template which is made using the React. 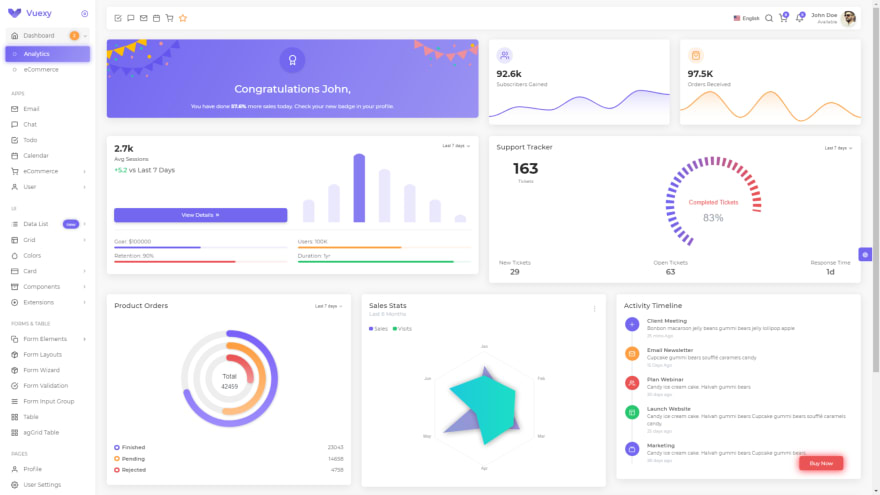 If you think the roadmap can be improved, please do open a PR with any updates and submit any issues on the original git repo, Adam Golab's React-developer-roadmap.

That's all about The ReactJS RoadMap For Developers. It's very comprehensive for sure, but there is a good chance that many of you may already know most of the stuff. Even if you don't know, no need to be confused or overwhelmed by this roadmap; you can start small and then follow along.

Apart from this, there is an article on the best ReactJS UI Frameworks and component libraries which will be helpful, too.

There are many ways to becoming a React Developer and if you already know React, you can surely find some more tools and technologies to add to your kitty and become even a better React Developer in 2020.