This article was written to design a solution for terravigil.com articles ordering. It will start as a problem related to articles, and will end with the same problem as well. But in between...

Let's do some math:

💡 There is an easy way to "experience" this problem - open any table within some table processor (Excel) and try to sort by a field. And then another field. And then by two fields simultaneously -

Want to get by time AND by rating simultaneously - that is not possible, the ordering is happening sequentially, or it's better to say in the 1D world.

However, it's easy to start the story from another example. From the actual 2D world. Something we all experienced, and able to understand.

Let's do some math:

For the sake of simplicity - let's use domain.com.au as an example.

Let's check what we actually looking at:

So, this is "our situation" - we have more data than we could, or should display, so we have to apply some limits - we have to pick "latest AND the best" items to display.

We have to pick the best items with restriction by X and Y. Already 1-dimensional ordering and 2-dimensional filtering.

However, I would like to point in that strange fact, that there is almost no information outside of Downtown.

Probably nobody is selling or leasing their houses so far from the centre. People are not living in those wild areas! Sounds reasonable? 🤷‍♂️ why not?

However, let's double-check it - zoo-oo-ooming in! 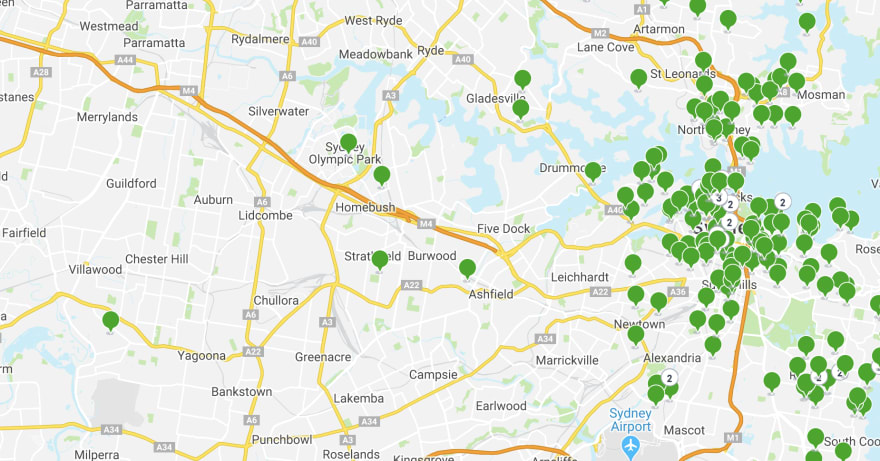 😎 I would assure you, there is life outside of Sydney's CBD, we just are not able to see it due to limitation of 2D dimensions.

I've got a video for you

👉 In short: there is A LOT of "dots" outside the Downtown, but we don't see them.

The root cause of this effect is - information tend to be displayed in the areas of higher density. And yes - it comes, and become worse and worse, with a scale.

information tend to be displayed in the areas of higher density. Every entity has an equal probability to be picked, and that's why higher "density" produces more "picks"

Actually, the root cause here can be observed as the overall "speed" of updating information on the map as well.
Every time I move the map, domain fetches the new information from the backend, and then displays it. Very often, especially within "areas of high density", the updated data does not represent the previous dataset (it might be very different), even if I am searching roughly the same area.

This causes heavy load on the backend, very slow and non-responsive frontend, as well as annoying POI-glittering. Really VERY annoying. Especially when some point you had a plans to inspect just disappears... 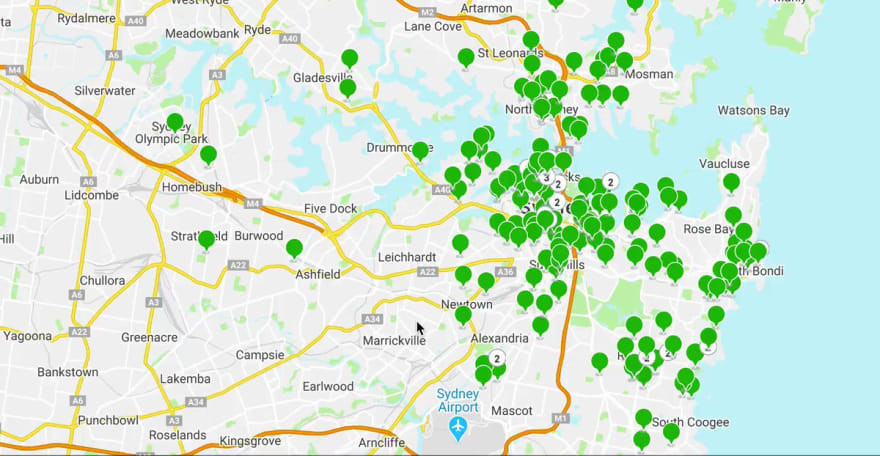 Using @Domaincomau to explain the problems with 2-dimensional queries with 1-dimensional sorting.

In short - information tend to "stay" in the areas of higher density. However, that's is unacceptable for a real estate site.

We have two problems here:

Every request is unique. You can move a map as you want, and every time it would be absolutely unique. You will have to reach the server, spend time, return a unique result.

Two customers, looking at one area, are looking at ABSOLUTELY different ones. 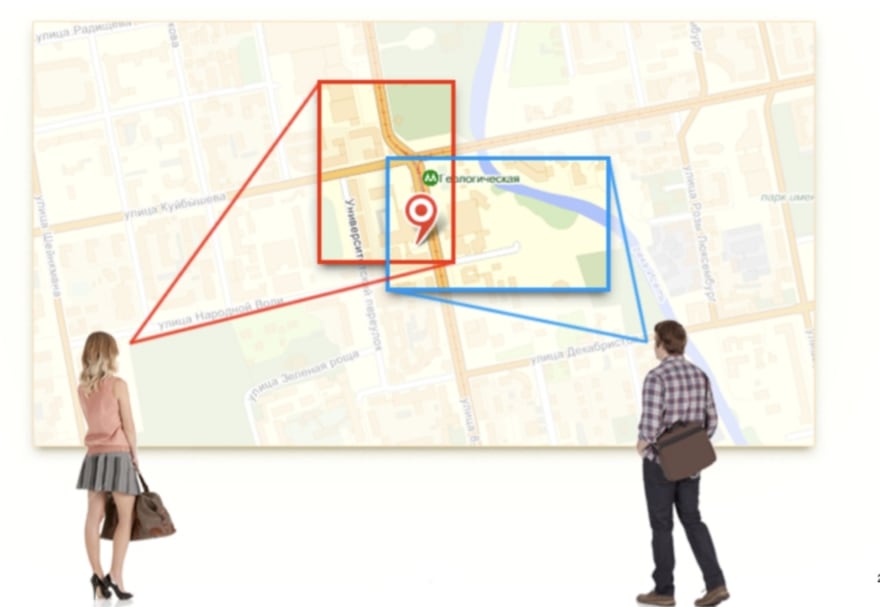 There is one thing you have to understand - maps "displaying" some stuff are here for some time. For "some time" - since IE6 and pre-iPhone era. Since "before" AWS. Since the times, when you had a single database for all 1000000 customers per day.
In other words - 10 years ago you were not able to "scale up", and had to provide performant and efficient backend, or your Frontend will DDOS your backend.

Problem number 2 consist of the other two problems:

And "information density" is the problem you have to fix first. Not to fix - but neutralize.

For example,​ you can do N smaller requests to "cover" the whole requested area.

This time instead of one big select we are making a dozen smaller, every of which still tends to display the most "dense" part of it, but covering the whole block more or less evenly.

However - it is not efficient. There is a better way - group by

In this case we have grouped all points in some "smaller area" together, resulting potentially up to 100 rows(0.1x0.1 grouping).
This is, again, not efficient, but could it help us with reducing dev city of the data and making coverage a bit more “flat”.

We just make a complex task a bit simpler.

However, this is not clusterization we probably should use to properly display high density information. All we did is aggregation, and that's enough! But we did it not in the best way.
There is a better one.

The goal of aggregation is to collapse some records, which could be grouped somehow, into one record.
For 2d data the most common solution is known as Z or Morton code, as well as geohash, Gray code or Hilbert curve - they all are some sort of spatial filling curves, literally a line which stitches N dimension together. 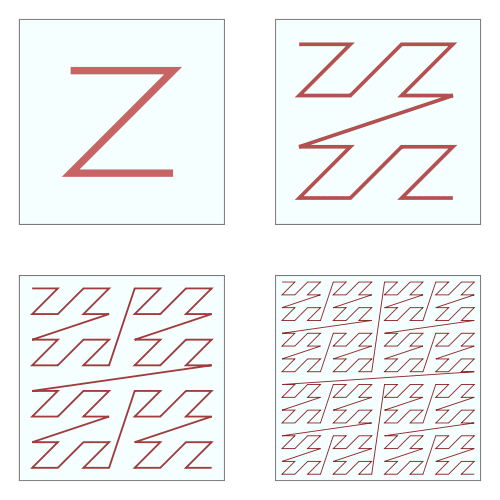 It might take a while to understand how such curves work, but the essence of the idea is simple:

Where 0xFFFF00 is playing a role of a "mask" and groups 😎values which are "close" on the curve😎 effectively clustering elements which are close to each other in 2D.

The explanation how "clustering" work is best seen on Bings Tile "coordinate" System - quadkeys (the same Z code) which uses 2 bits (0-1-2-3) per one "division". So masking the "following" bits can "group" all points with the same beginning of the code. And all points in one "rectangle" will have the same beginning. 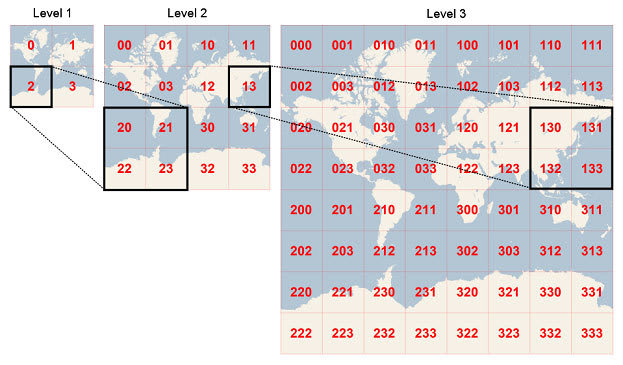 A bit different approach is used in search engines, which also need to find and rank something among a billion documents.
"Similarity" search is one of key algorithms there, and word2vec is a key technique here.

Mathematically speaking it's the same case - "close" words or "documents" would end "close" to each other in the (very) multi-dimension space (for the reference it's not 2D or 3D, but closer to 1000D).

However let's back to our articles case, about displaying "the best and the most fresh" data.

What we actually want:

There are two possible solutions here: buckets and score

Buckets are first bucket by time, then sort by rate.

Selects news ordered by a single "score", which is the main problem of this article.
While spatial curves can help with 2D and other geometrical cases - they are more or less useless for this particular case.

Why? Because some elements "close" on the 2D plot would be VERY far on the curve. Just think for "start" is different from the "end", while curve starts and ends in the same point.

Solution here is to use or special "vector" data formats or databases known as KNN - k-nearest neighbours search (or Nearest centroid. 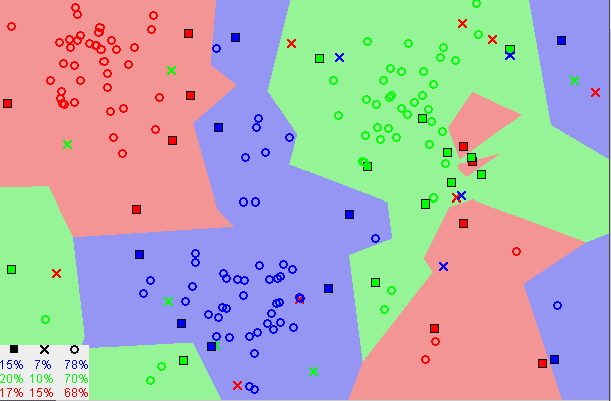 A sample data set of points considered as "neighbours"

Long story short - Terravigil uses buckets as long as it's easy to design them and understand how they work, so you can create a correct result.
As well it uses score to derive a single metric from many different other signals to at least understand which article is "the best".

But all you have to do - just look at the problem from another angle. If you were told to do a 2-dimensional sorting, thinks about limits of the 2-nd dimension.

How to style broken images with css

Beginner looking for a community

The ultimate guide to understanding the 'this' keyword in JavaScript