AWS has gained exponential traction over the past years, and for all the good reasons.

While as a beginner AWS can be a bit of a headache (you know, due to the fact that there is over 200+ services to choose from) the entry level for the grand majority of them is relatively low, especially you have some software engineering experience.

So is the case for Step Functions, easy to understand, relatively hard to master. In this article I want to guide you through some techniques and introduce you to some concepts that will help you understand and efficiently manage the state.

Wait, what are step functions?

Step functions are infrastructure as code meant to represent the series of steps your logical process. This process can be anything, moving data from S3 buckets, executing Lambdas, sending Alarms. Any of the AWS Services can be used in custom made flows that you will define, and later have available as IAC.

In this article, rather than explain what you can do with them, I will detail what the state is and how to manage it.

Set Up (Only if you want to follow along practically)

AWS offers free tier for 12 months (with certain limits), if you have never developed Step Functions in AWS, I recommend you build the step function as you follow along the article.

Make sure the step function has rights of execution by adding the AWSLambdaRole policy to the Step Function's role.

The state is a JSON object that defines the input of the logical step you are executing as well as later becoming the output of it. This JSON structure is completely customizable, however, you need to take care of it's structure and content, otherwise it will become unreadable and unmaintainable.

The execution state is the input the step function was executed with.

It can be defined when executing the step function manually or by schedulers/orchestrators which do it for you. You can modify it, but it is highly recommended you don't, this way you will be able to know how the step function was executed.. 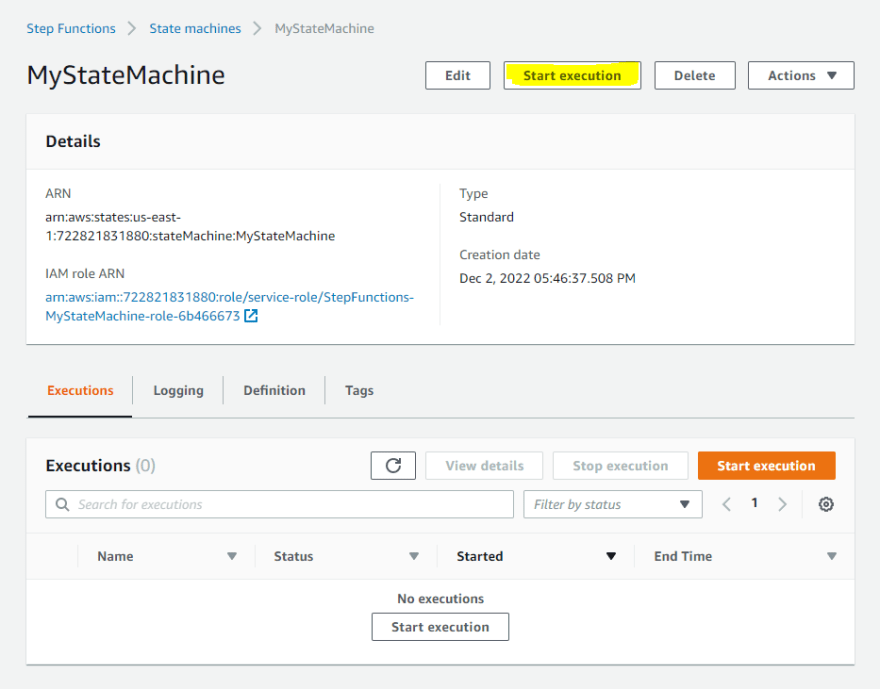 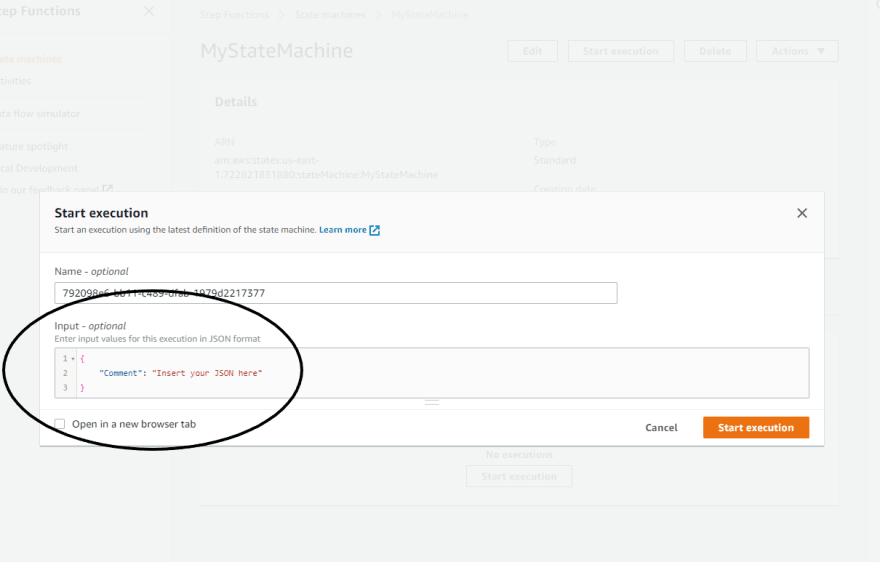 The execution state will be accessible during the whole flow of the function, leverage it!

By using double $ as a prefix you can access the Execution State and use it's keys as if they were variables. You will also need to use .$ as a suffix in the key where you want to use it.

For example, let's run the hello-world Lambda using the following:

If you look at the results, you will see the values have been successfully replaced: 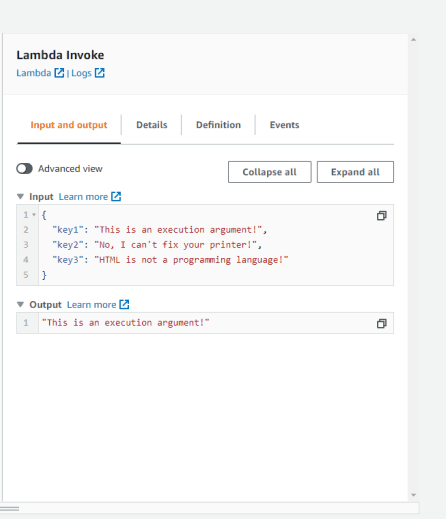 The local state is the one you get to play with the most, since it gets changed / manipulated in every step.

In the first step of the step function, the Execution State will be copied and used as an input.

The flow goes as follows:

However, sometimes you want to be able to keep the output of a step for another one which is further down the line.

Whatever the case is, in 90% of situations you will need to manipulate it in order to fit your flow's needs.

Left unchecked, your state will become messy and unreadable (truncated, some of these objects are very long): 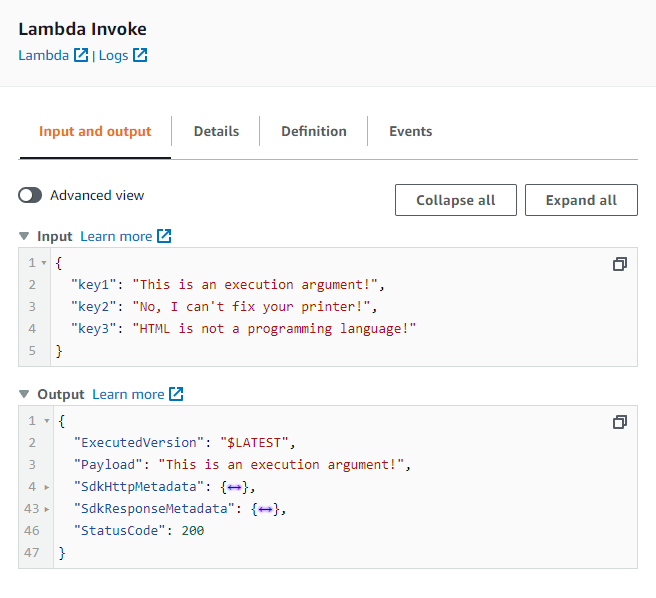 In this picture, the lambda invoke is the first step, thus the input is a copy of the Execution State. After that, the local state will become the Output. In the next step, the Input would be the Output shown.

You can manipulate the state with the given paths:

It is key you understand what all these paths mean in order to master manipulating your state and leveraging it.

All the paths can be enabled at every step of your flow: 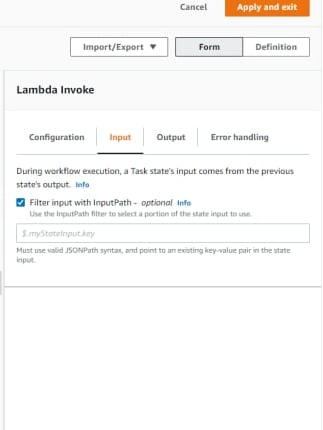 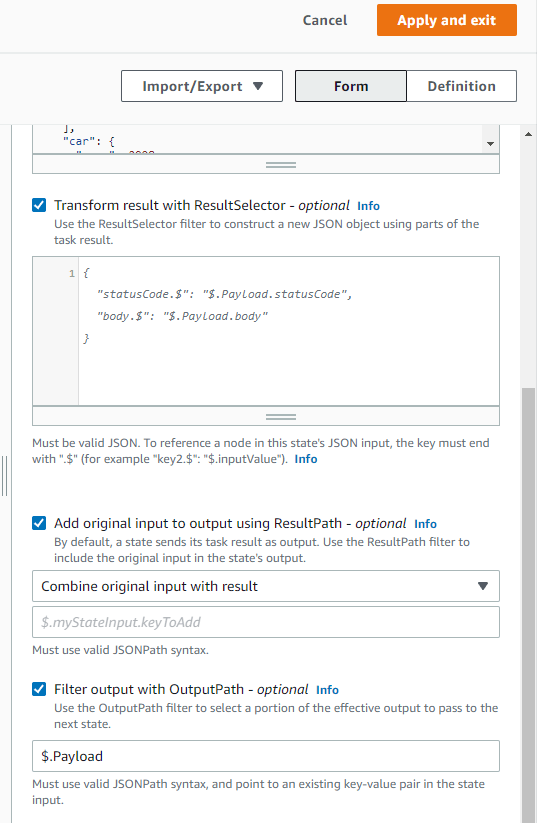 How are they executed:

Add the following to the InputPath:

It looks like nothing happened, activate the advanced view: 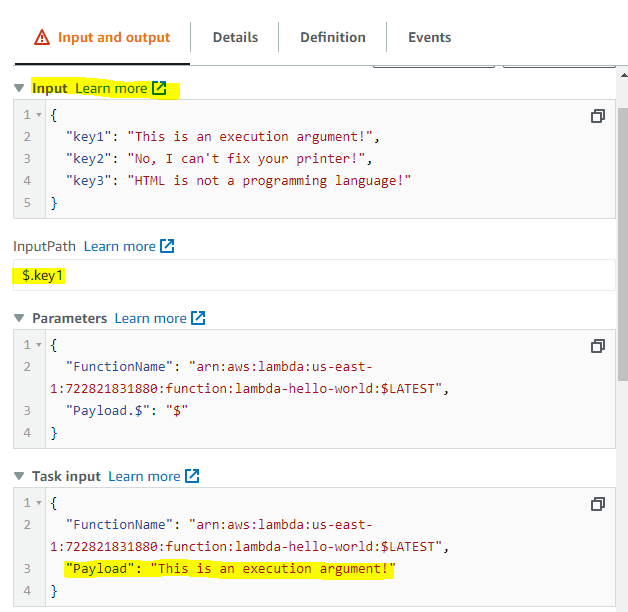 The payload was successfully changed. (The Lambda will fail, since the input is not supposed to be a string).

The ResultSelector takes care of filtering and transforming the step's output, with this you can shape the output to whatever form you want.

Add the following to ResultSelector:

Run the function, look at the results (truncated): 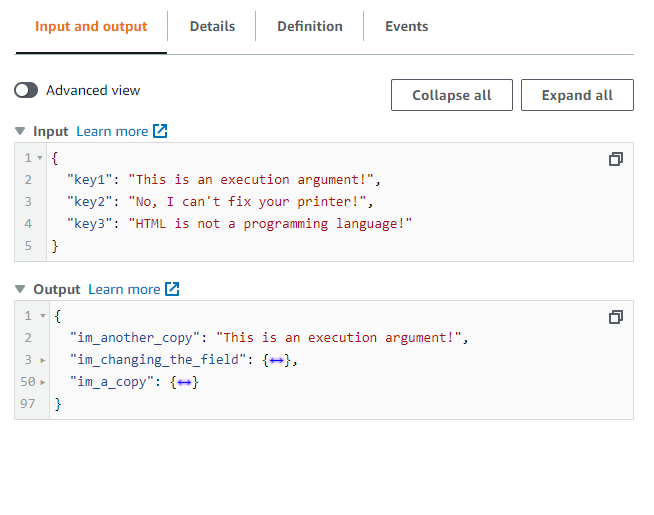 The ResultPath (different than ResultSelector) takes care of adding or substracting structures from your state. This step is limited to two options:

and select the first option.

Look at the results: 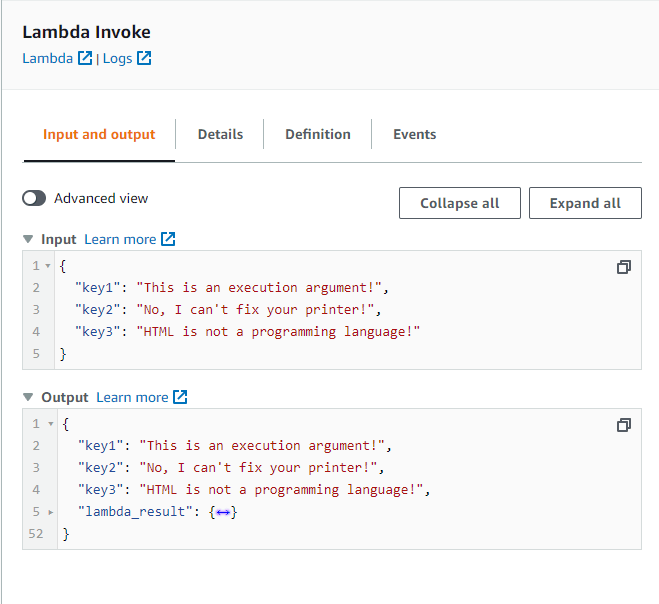 Do the same with the second option and look at the results: 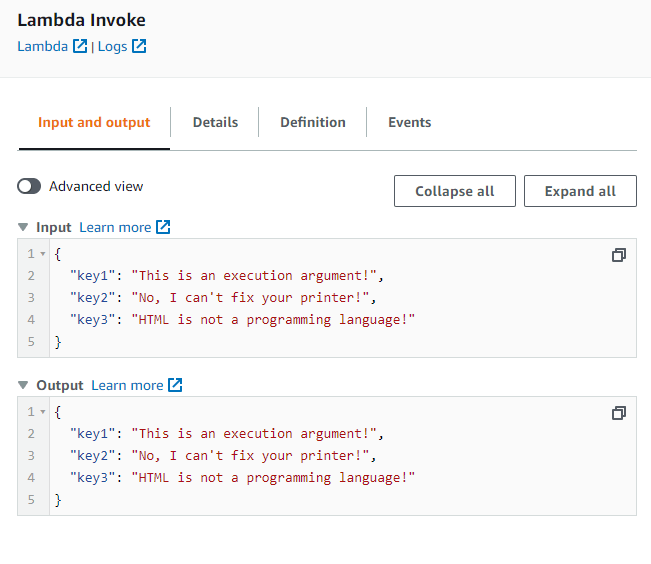 The OutputPath does the same as the InputPath, but for the output. Take in account this output can be the raw output from the step or, a transformed output that comes from ResultSelector/ResultPath.

Run the function, look at the results (enable advanced view): 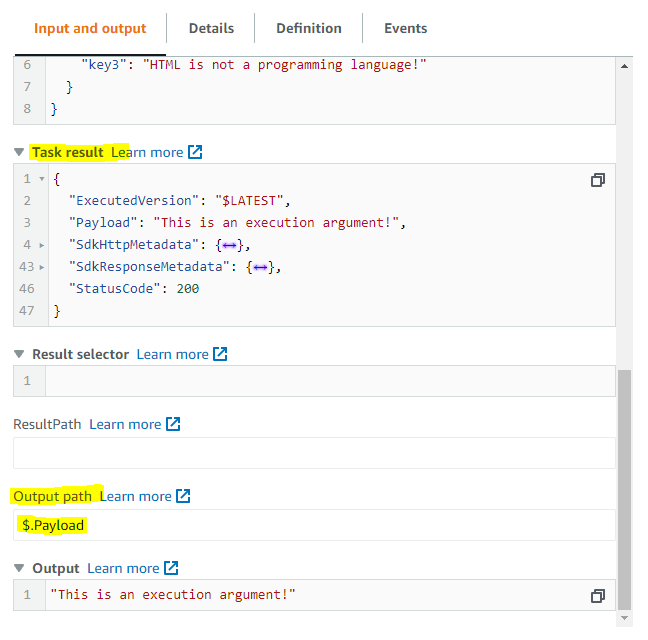 Notice how the Result was filtered by the OutputPath.

Now try to combine all of them at the same time ;)

Now you know how the state works and how to manipulate it, it falls on your shoulders to keep it clean and readable.

Reflect on the following:

These questions will help you design clean and readable step functions.

Thank you for reading and see you in the next one!

Web-Based Programming Tools for Everyone

Once suspended, thehunter896 will not be able to comment or publish posts until their suspension is removed.

Once unsuspended, thehunter896 will be able to comment and publish posts again.

Once unpublished, all posts by thehunter896 will become hidden and only accessible to themselves.

If thehunter896 is not suspended, they can still re-publish their posts from their dashboard.

Once unpublished, this post will become invisible to the public and only accessible to David Bros.

Thanks for keeping DEV Community 👩‍💻👨‍💻 safe. Here is what you can do to flag thehunter896:

Unflagging thehunter896 will restore default visibility to their posts.