Kafka Connect is becoming a force on the Change Data Capture field.

Kafka itself has gained a lot of momentum being more and more adopted by Companies trying to move their data workloads from batch processing to micro-batching/realtime processing of events among other practical possible solutions of using it.

Kafka Connect is a tool which helps to enable almost Real-Time synchronization of data between silos within an organization. With its clear Approach to connect systems, helping you to move data and apply simple transformations to the data.

Kafka Connect enables us to solve the "real time" data integration needed these days within a corporation with its hundreds or thousands of different systems while relying on standard Kafka features like scalability, fault tolerance and high availability.

Kafka Connect is a tool for scalably and reliably streaming data between Apache Kafka and other systems. It makes it simple to quickly define connectors that move large collections of data into and out of Kafka. Kafka Connect can ingest entire databases or collect metrics from all your application servers into Kafka topics, making the data available for stream processing with low latency.

Source Connectors: import data from another system into Kafka

Sink Connectors: export data from Kafka to another systems 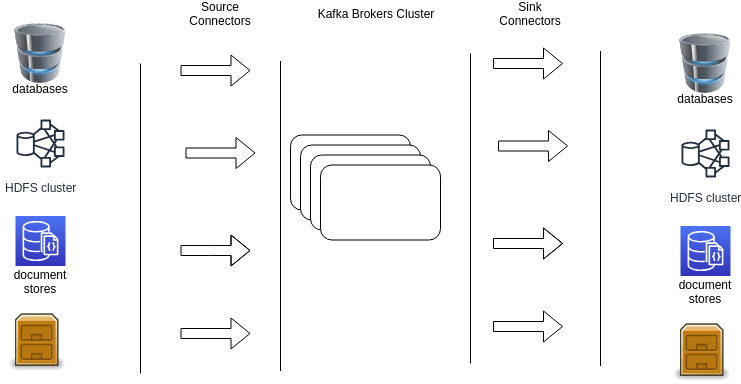 In standalone mode, all work is performed in a single process it's simpler to get started with and may be useful in situations where only one worker makes sense (e.g. collecting log files), but it does not benefit from some of the features of Kafka Connect such as fault tolerance.

Distributed mode handles automatically the balancing of work, allows you to scale up (or down) dynamically, and offers fault tolerance both in the active tasks and for configuration and offset commit data.

In its last release, while writing this post, Kafka Connect 2.3.0 incorporated a new implementation feature which makes it even more attractive, it's now capable of only partially pausing processing messages when going through a rebalance. A feature called, Incremental Cooperative Rebalancing.
i.e - only the affected partition processed by a worker will be paused while the other workers connected to different partitions can continue processing during rebalancing.

One thing I've noticed is Kafka Connect available tutorials and instructions are everywhere but they are mostly covering the Confluent Connectors and some other existing platforms and recommending to use their CLIs to install and configure the connectors, which is good and brings many benefits in an enterprise environment to running production workloads, but those tools hide away the Connector Implementation and possibilities behind it from Developers like us, so the goal here in this article is to cover the basics and run the simplest possible Kafka Connect using the "plain" Kafka distribution and the command line, no specific vendor add ons on top of it.

To run the example from this post we will use a docker-compose file with all our dependencies to run Kafka plus an extra container with the built-in FileStream Source Connector configured.

For details on the docker-compose setup for Kafka and Zookeeper please check this previous article to run a basic local Kafka instance for local development with some useful commands and tricks.

We will be using the wurstmeister/kafka image as it's a pure build directly from the Open Source Kafka Distribution.

The full docker-compose file can be picked up cloning this repo under kafka-connect-crash-course folder. Here's a direct link to it.

The compose file set up 3 containers, the two first containers are picked up from the docker hub and use the wurstmeister images for Kafka and Zookeeper.

the third one, which is the connector, is built in from the project to show how Kafka Connect can be configured and set up for local development. It relies on docker-compose ability to build docker images from a Dockerfile.

So we're building the image from a Dockerfile, let's take a look at it:

The start-kafka.sh script is a very simple script that uses the provided connector script to initialize a standalone connector passing in it's general properties and specific connector properties files as parameter:

We override the general connect-standalone.properties to change the resolution name for the kafka broker running in our docker-compose setup so we have changed the line of the bootstrap-servers to the resolvable name kafka within our docker network:

And the connect-file-source.properties is the local configuration of the built-in FileStreamSource Connector. This connector is provided as part of the Apache Kafka Distribution the contents of the file are commented when not self explainable next.

For simplicity, we override the key and value converters and schemas and we configure the file to be used as input to be /tmp/my-source-file.txt this is an internal container path that we then map to an external volume in our workspace where we know we have read and write access, fromi docker-compose.yml

There are some nice tools that enable you to run Kafka commands in simpler ways(see references by the end of this article) but they usually wrap around the basic commands and scripts and I find it important that you be aware of the core available commands for learning purposes, that's why I don't recommend you to use those tools initially.

The Kafka Connectors Framework exposes by default a REST port so we can get some useful information and issue some commands to manage it. You can use your favorite tool to interact with it, I mostly use curl, Insomnia and Postman.

See some examples of querying for info:

Other connectors - Debezium, Landoop, and many others available at a single search distance with your favorite search engine.

My New Portfolio and how to make one.

CI with SonarQube and Flutter - Part 1

How the N+1 query problem can burn your database