The MOSFET (Metal Oxide Semiconductor Field Effect Transistor) transistor is a semiconductor device that is commonly used in electronic devices for switching and amplifying electronic signals. The MOSFET consists of three terminals: source, gate, and drain. The MOSFET is by far the most widely used transistor, and it can be used in both analogue and digital circuits.

The MOSFET operates by varying the width of a charge-carrier-flowing channel (holes and electrons). Charge carriers enter the channel from the source and leave via the drain. The voltage on an electrode called the gate, which is located between the source and drain, controls the channel width. An extremely thin layer of metal oxide separates it from the channel. MOSFET applications come in a variety of shapes and sizes, depending on the needs.

MOSFETs are divided into two types:

The channel reaches its maximum conductance when the gate terminal is at zero voltage. The channel conductivity decreases as the gate voltage goes either negative or positive. 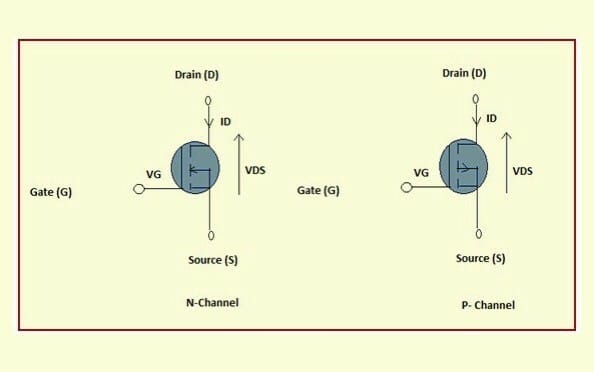 The metal oxide semiconductor (MOS) capacitor, which is the MOSFET's main component, is responsible for the MOSFET's operation. Between the source and drain terminals, there is an oxide layer. By applying positive or negative gate voltages, it can be switched from p-type to n-type. When a positive gate voltage is applied, the holes beneath the oxide layer are pushed downward through the substrate by a repulsive force. The bound negative charges that are allied with the acceptor atoms populate the deflection region. 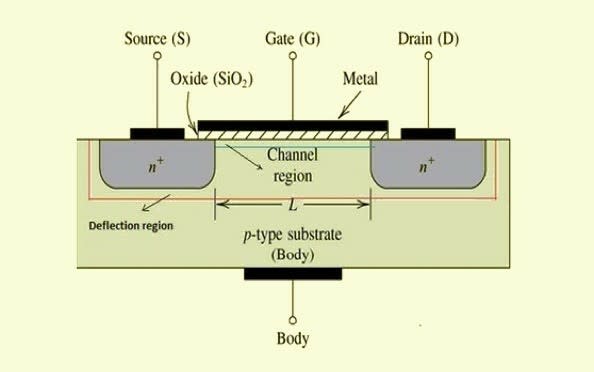 MOSFETs with a P-Channel:

Because the P-Channel MOSFET is made up of negative ions, it can only work with negative voltages. When a negative voltage is applied to the gate, the electrons beneath the oxide layer are pushed downward into the substrate by a repulsive force. The bound positive charges that are associated with the donor atoms populate the deflection region. Additionally, the negative voltage attracts holes from the surrounding environment.

The holes under the oxide layer pushed downward into the substrate with a repulsive force when the positive gate voltage was applied. The bound negative charges that are associated with the acceptor atoms populate the deflection region. Electrons from the n+ source and drain regions are also attracted into the channel by the positive voltage. When a voltage is applied between the drain and the source, current flows freely between them, while the gate voltage controls the electrons in the channel. When a negative voltage (hole) is applied in place of a positive voltage, a channel is formed beneath the oxide layer.