In this tutorial, you will learn how to push your locally hosted project code to GitHub.

To initialize your local repository and push it to GitHub, you will need:

Sign into GitHub and create a new empty repo. 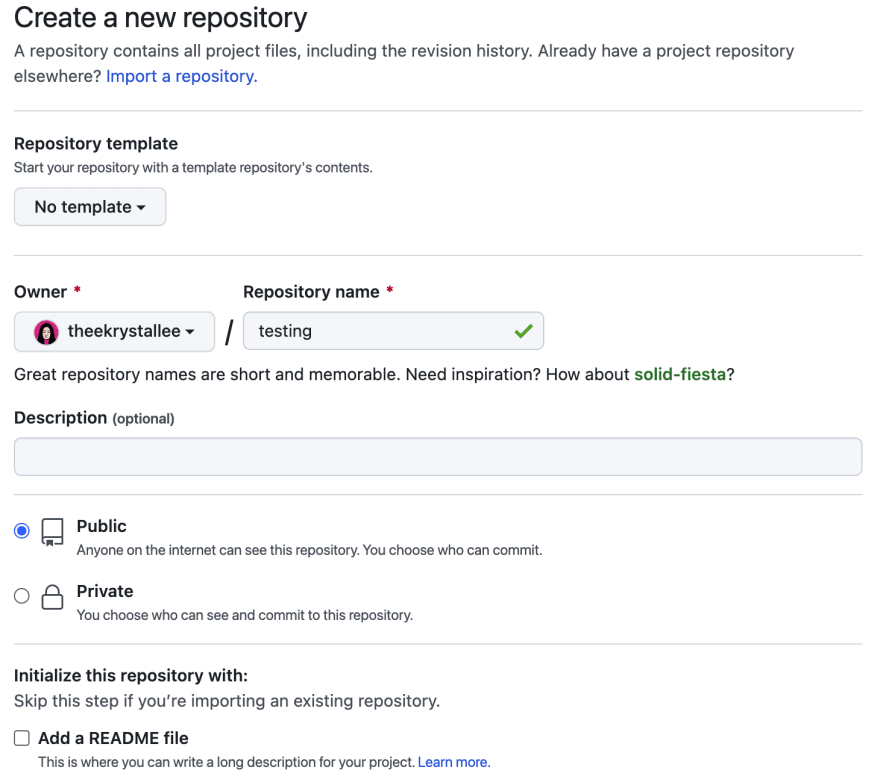 Run the following commands after navigating to the project folder you want to add and push to GitHub.

Make sure you are in the root directory of the project you want to push to GitHub and run:

This step creates a hidden .git directory in your local project folder used to store all version history and metadata for the project.

The git add command tells git which files to include in the commit. The -A or --all argument means "include all" files in that project folder.

The git commit command creates a new commit with all the files that have been added from the previous step. The -m or --message sets the commit message that will be included with the commit.

The git status command displays what changes have been staged. In this case, you want to check that all files from your local project directory have been added.

In git, "remote" refers to a remote version of the same repository, typically hosted on GitHub. "origin" is the default name git gives to a remote repo. git remote add origin is telling git to add the URL of the default remote server for this repo.

You can run the git remote -v command to check that your GitHub repo was added as the remote repo that you will be pushing your local changes to.

The -u flag sets the remote origin as the upstream reference that allows you to perform git push and git pull commands without specifying an origin.

The -f flag stands for force and will automatically overwrite everything in the remote directory.

Now you are all set to track your local code changes remotely in GitHub and understand the basics on how to add project files, commit changes, and push your code. The steps listed above are best for personal projects.

Follow steps 2 and 4 to push your local code changes to your GitHub a couple of times an hour to avoid large commits.

Where to Find Me

Feel free to reach out to me with any questions on Twitter and follow me on TikTok.

7 Things to Consider When Working On a Personal Project

How to Become a Faster Programmer

How to get ready for Hacktoberfest 2022

Once suspended, theekrystallee will not be able to comment or publish posts until their suspension is removed.

Once unsuspended, theekrystallee will be able to comment and publish posts again.

Once unpublished, all posts by theekrystallee will become hidden and only accessible to themselves.

If theekrystallee is not suspended, they can still re-publish their posts from their dashboard.

Once unpublished, this post will become invisible to the public and only accessible to @theekrystallee.

Thanks for keeping DEV Community 👩‍💻👨‍💻 safe. Here is what you can do to flag theekrystallee:

Unflagging theekrystallee will restore default visibility to their posts.