I would like to note that this article is not expressing hate or anything towards Vue.js.
I LOVE Vue and I sponsor the development of it 💝.
I just want to share my opinion, and I would love to hear your thoughts as well 👂.

First, I see a lot of people referring to OptA (Options API) as it is Vue 2 and that using it means you also have to use mixins and whatnot. That's not true.
I don't see why we distinguish between OptA (Options API) and CompA (Composition API).
We can write CompA inside OptA, in the setup method:

In fact, in the Composition API RFC we saw just that. The introduction of a new component option inside OptA called setup.
So Options API is not Vue 2. You can use CompA api using the setup method, which means you can use composables instead of mixins.

The first time I saw CompA I loved it! With it, we have more control about how we define reactivity, we can have reactivity outside of components and sharing code with composables is a great alternative to mixins.

The first time I tried the setup method along with OptA I thought to myself: "What a wonderful world" 🎶.

I replaced my mixins with composables, and I saw that CompA is really powerful and that it unlocks a lot of possibilities.
I could even extract and group code together that have the same logic, and I could even compose them together.
Composables look so clean, and they seem so simple compared to mixins.
Most importantly, you don't have to worry about the drawbacks of mixins.

No one complained about the Options API 🤨

It's crystal clear that CompA is a great addition to Vue 3. With it, you can dig deeper and manually control reactivity:

Whereas with OptA reactivity works automatically:

Create components with Options API and in advanced cases use Composition API to better control reactivity.

But no! OptA syntax is no longer recommended by Vue team even though I never heard anyone complaining about it.

For primarily low-complexity scenarios use OptA.
For full applications, use CompA.

What does this mean? Use options api only for TODO apps? ❓🤔

Even though the setup method was introduced as a new component option, the docs recommend using it only if you have an existing OptA codebase. Because for new apps it's not recommended to use it:

So it's clear! OptA is not recommended and from my experience on reading the docs, it's discouraged.

OptA is Legacy! You don't understand coding. You are a junior! Become a better dev just by using CompA.

DX of the Composition API 🐛

Alright, since the Vue team & other devs push us to use CompA, we should drop OptA. Right? R i g h t ??
So let's see some CompA magic seen through my eyes.

Why ref and reactive ??

reactive has some limitations:

So ref comes as a solution. But does it solve the limitations of reactive ? Why not use the same example we had with reactive but by using ref to have a better comparison ?

Hmm, that doesn't work either. So ref has the same limitations.
If you pull out a property of that object you will get a non-reactive property.

ref is a smart trick by providing an object that has a value property. While you use the ref as is you are good. If you mess with .value though, you might end up with the limitations of reactive.

Usage in the template

You might wonder, how to display a ref variable in the template ? Should I access it via .value ?

The answer is no. Vue automatically "unwraps" the ref variable and displays the .value.

Updating the ref variable in the template can be done without using .value, as you can see from the example above where we directly do count++.

So ref gets unwrapped when we use it in the template.
But not always:

Say that we have the 2 following variables:

From the example above, here are some things that maybe don't work as you think they should work.

Whaaat 😳? Calm down, let's explain it.

So what happens, is that a ref inside a reactive object is getting unwrapped so no .value is available on the refs inside that object.
But remember that there is no unwrapping happening inside a reactive Array or a native collection type like Map or Set.

How about the sync part ? Why does that happen? And why does it stop only when assigning another ref ?

That's how it works. That can be powerful but with great power comes great responsibility.

A lot to keep in mind right? And we only touched on the ref and reactive APIs. But there is more: 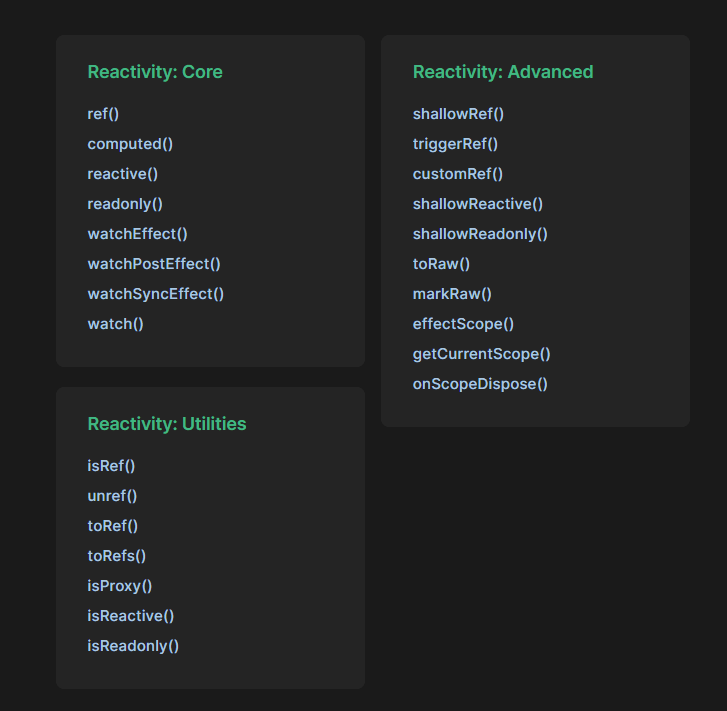 So, with Composition API:

It's true that CompA is really powerful, but I believe that the points above show us that the DX is not that great compared to OptA.

CompA is extremely powerful and has a lot of features, but it takes time to learn it and it can become difficult to debug especially if you don't use TypeScript.
Personally, I would say that the Development experience of OptA is much better than CompA for creating components.

You don't have to worry about reactivity loss or what apis to choose for reactivity and be careful with the limitations that come with them, but you focus on the component output.

Generally, I would say that using CompA for creating components has the following disadvantages:

I know that people show simple snippets where script setup looks cleaner, but the truth is that in real-world apps the code doesn't look that clean: 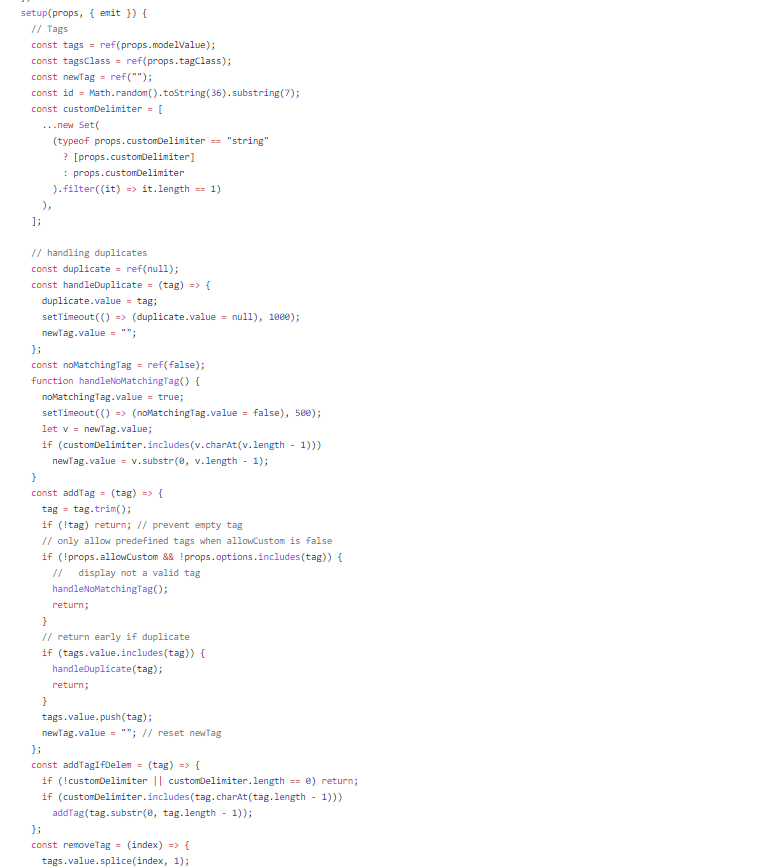 And I believe that if the Vue team would push towards this way of using Vue, things would be much better.
But from what I see, the recommendation is to use script setup and stick with CompA only.
And this is exactly what I did. I switched to using only CompA.

But, sometimes I work on a Vue 2 project for a part-time job and when I use OptA I feel more productive, and I love the facts that I don't have to manually define reactivity and that I can fold/unfold section of the code, and I visually analyze the code better (where is the method, where is the computed, etc.).

Even though now I am confident using CompA, there are still cases where I fall into reactivity loss or forget about reactivity apis behaviors (e.g. unwrapping, syncing, .value, etc.).

All in all, CompA is great. OptA was great too.
Even though I loved OptA, I switched to CompA and probably is just a matter of time in order to get convinced that CompA is the way to go "for building full applications".

Or who knows? I might end up using OptA again despite the fact that docs discourage it. 😁

But what do you think? 🤔
Please share your thoughts. Let's discuss!

What do you prefer for creating components? Options or Composition API and why?

Building a Decentralized Twitter in 50 minutes using the Subsocial SDK

Once suspended, the_one will not be able to comment or publish posts until their suspension is removed.

Once unsuspended, the_one will be able to comment and publish posts again.

Once unpublished, all posts by the_one will become hidden and only accessible to themselves.

If the_one is not suspended, they can still re-publish their posts from their dashboard.

Once unpublished, this post will become invisible to the public and only accessible to Roland Doda.

Thanks for keeping DEV Community safe. Here is what you can do to flag the_one:

Unflagging the_one will restore default visibility to their posts.