With ES6, EcmaScript releases a new way of working with the functions. In this article we will take a look at them and how and where we can use them

What are the generator functions?

Generator functions are a special type of function which allows you to suspend their execution and later resumed at any time. Thye have also simplified the creation of iterators but we will get into that later. Let’s start simply by understanding what they are with some examples.

Now, in generator functions, we don’t use return statements but rather a yield which specifies the value to be returned from the iterator. Now in the above example, it will return us a value of 1. Now, when we call generator functions like a normal ES6 function it does not directly execute the function but rather returns a Generator object. The Generator object contains next(), return and throw which can be used to interact with our generator functions. It works similarly to an iterator but you have more control over it. Let’s see with an example of how we can use generatorFunction. Now, as I told you before we get next(). Now, the next() method returns an object with two properties done and value. You can also provide a parameter to the next method to send a value to the generator. Let’s see this with an example.

Now, as I said earlier that we can also pass values to the generator function through next and that value can be used inside generator the function. Let’s see how that works with another example. 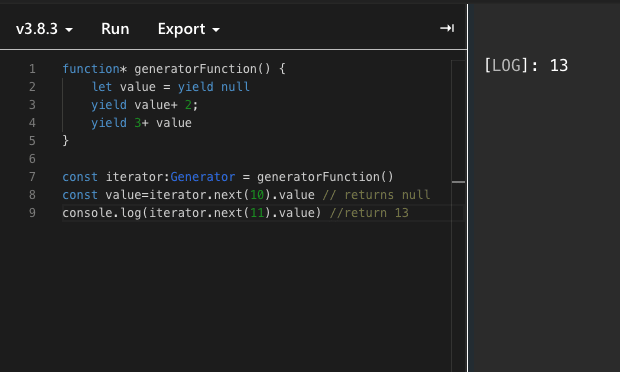 Now, here when you obtain the generator you don’t have a yield you can push values to. So first you have to reach a yield by calling the next on the generator initially. It will return null always. You can pass arguments or not it does not matter it will always return null. Now, once you have done that you have a yield at your disposal and you can push your value via iterator.next() which will effectively replace yield null with the input passed through next and then when it finds another yield it returns back to the consumer of the generator which is our iterator here.

Now, let’s talk a little about the yeild keyword. Here, it looks like it’s working like return but on steroids because return simply returns a value from a function after a function is called and it will also not allow you to do anything after return keyword in a normal function but in our case yield is doing much more than that it’s returning a value but when you again call it, it will move on to the next yield statement. The yield keyword is used to pause and resume a generator function. The yield returns an object and it contains a value and done. The value is the result of the evaluating of the generator functions and the done indicates whether our generator function has been fully completed or not, its values can be either true or false. We can also use return keyword in generator function and it will return the same object but it will not go any further than that and the code after return will
never be reached even if you have 6 yield after that so you need to be very careful using the return and should only be used once you are certain the job of the generator function is done.

Now, generator functions can very easily simplify the creation of iterators, implementation of the recursion or better async functionality. Let’s look at some examples.

In the above, it’s an infinite loop but it will only be executed as many times as we call next on the iterator and since it preserves the previous state of the function it continues to count. This is just a very basic example of how it can be used but we can use more complex logic inside the generator functions giving us more power.

Now before using the generator function just keep some things in mind that you cannot access a value again if you have already accessed.

How to Make an Input Field Grow/Shrink as you Type