FREE EDUCATION, what a wonderful idea, you go through the advertisement and at the rate you see them, their reviews, you get this feeling of a heavenly society growing and giving education, albeit everyone wants to be a part of it.

I wanted to get an American Accredited Degree, what better way than to do it online, saves money and time. I applied with whatever, I had, got admitted and in the process realise a couple of things that I wished, would have been in my time, not more than just 10-15 years back. Now, I got admitted in Bachelors in Computer Science and I was asked either to pay or apply for scholarship. In the mean time, i sent an email to info@uopeople.edu

A Preview of the Email 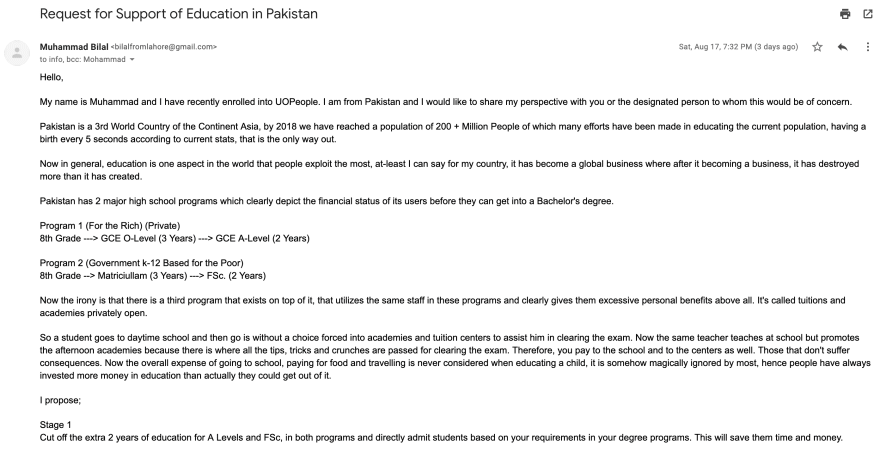 My name is Muhammad and I have recently enrolled into UOPeople. I am from Pakistan and I would like to share my perspective with you or the designated person to whom this would be of concern.

Pakistan is a 3rd World Country of the Continent Asia, by 2018 we have reached a population of 200 + Million People of which many efforts have been made in educating the current population, having a birth every 5 seconds according to current stats, that is the only way out.

Now in general, education is one aspect in the world that people exploit the most, at-least I can say for my country, it has become a global business where after it becoming a business, it has destroyed more than it has created.

Pakistan has 2 major high school programs which clearly depict the financial status of its users before they can get into a Bachelor's degree.

Program 1 (For the Rich) (Private)

Program 2 (Government k-12 Based for the Poor)

Now the irony is that there is a third program that exists on top of it, that utilizes the same staff in these programs and clearly gives them excessive personal benefits above all. It's called tuitions and academies privately open.

So a student goes to daytime school and then go is without a choice forced into academies and tuition centers to assist him in clearing the exam. Now the same teacher teaches at school but promotes the afternoon academies because there is where all the tips, tricks and crunches are passed for clearing the exam. Therefore, you pay to the school and to the centers as well. Those that don't suffer consequences. Now the overall expense of going to school, paying for food and travelling is never considered when educating a child, it is somehow magically ignored by most, hence people have always invested more money in education than actually they could get out of it.

Cut off the extra 2 years of education for A Levels and FSc, in both programs and directly admit students based on your requirements in your degree programs. This will save them time and money.

With your requirements and assistance, create a third faculty for high school, assisting people to get trained for their admittance in your online degree programs. This will save them time and money.

Rewrite the whole schooling system from Kindergarten to Grade 8th, to direct people towards stage 2 and eventually into your education system. This will save time and money.

Assist admit-tees in acquiring certifications along the road, as they change in technology and world takes place, creating more opportunities for companies to hire and benefit from them as well as they benefit from the companies.

Now, in my life, i have been broken quite many times, put astray, disregarded, ripped off by such monuments of destruction, only to realise if I could go back in time and redirect myself to this path, things would have been better, but i guess the experience was necessary for someone to realise and change the course of history. I have self-learned a lot and better but now does due feel that accreditation matter in a world like today for people to listen to you, so time didn't break me much but has made me stronger.

Anxiously Waiting for a Reply. 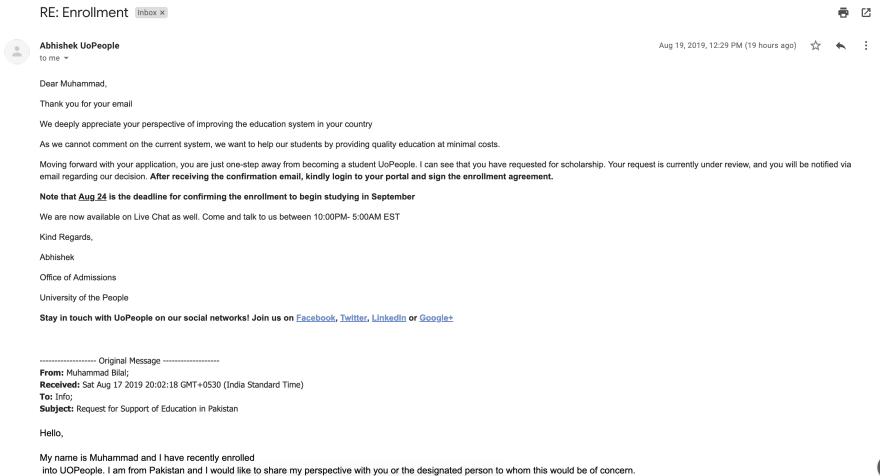 The final Shut Up Call

Conclusion So Far
I personally thought of a more exciting experience but somehow, i just feel things are not what is shown and maybe what told as well. Thought, i`d share the experience.

Concerns
Education should not be used as a medium to strip off the general public for the ability to grow and sustain themselves, it should be the mean to elevate poverty not create more of it.

Have you ever worked with an engineer who never leveled up?

New personal site, who this?

What do you think of Github Codespaces?

Muhammad
By helping others, you learn how to help yourself. When the Noob is at work, remember it's not a Noob at work.
What is the difference between a junior and a senior software developer? 15 things I wish I had known sooner
#career #cpp #productivity #computerscience
How to program better (or This is what is wrong with your code)
#career #beginners #codenewbie #codequality
How To Find a Mentor Using Twitter
#codenewbie #webdev #career