This addition to the tool’s existing capabilities (web, API, and mobile testing) will transform Katalon Studio into a complete cross-platform test automation solution.

This capability comes with a host of features that support easy test automation. Whether you’re proficient at programing or have just gotten started, you can still automate desktop app testing immediately. These features include:

Quickly get a grasp on the Katalon Studio’s user-interface and functionalities to start testing. You can either run Katalon Studio locally for macOS and Linux apps, or remotely for Windows apps.

Gone are the days when you have to integrate and deploy extra add-ons to test multiple end-to-end platform apps. Now, you can put less effort into configuring the tool to invest in other important tasks. 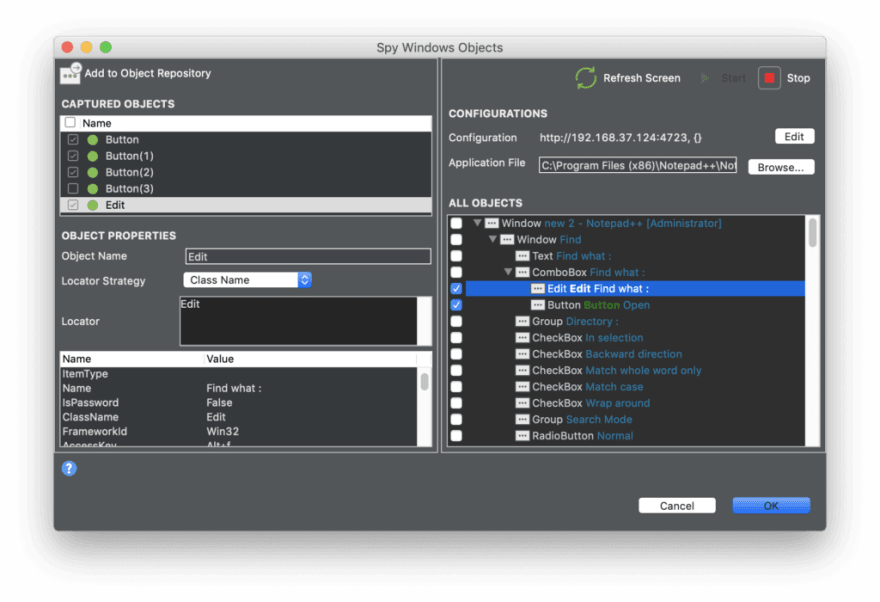 KS7 makes it easy to detect and spy Windows objects. It also offers functionalities for exploring, analyzing, and capturing all running desktop app objects, then add them to object repositories.

From the Spy Windows interface, you can specify an object name or locate methods to save time and effort of analyzing tests and locating objects.

From recording test actions, to inspecting running app objects and presenting them in a tree view, the record feature provides you with crucial support to run test cases in the most effective way.

This feature also allows you to highlight an object, auto-scroll to inspecting elements, display an actual screen view, and modify test steps during recording.

For fresh testers, the record Windows action is an invaluable way to adopt automated testing for desktop apps. 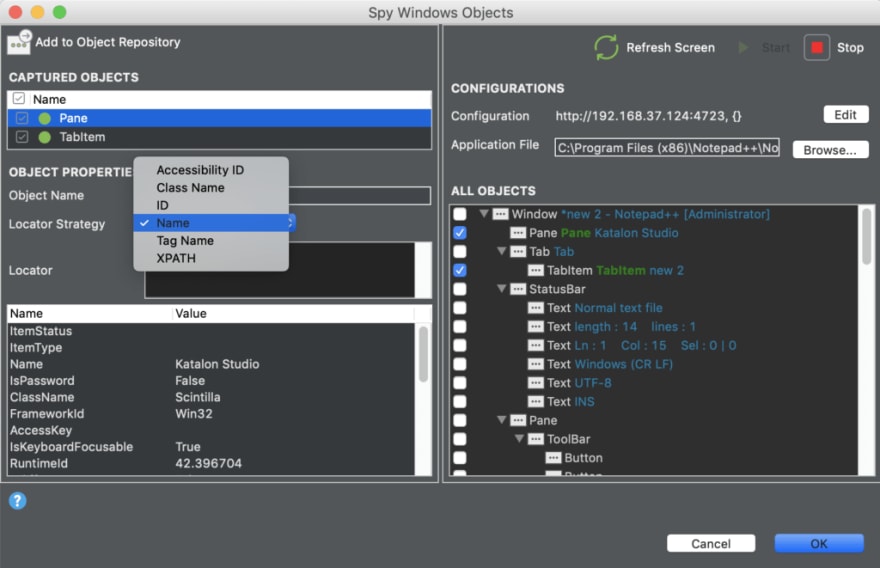 One of Katalon’s most outstanding features is the capability to locate UI elements automatically. You can decide your locator strategy between accessibility ID, class name, ID, name, tag name, and XPath in the corresponding UI element attributes.

Leverage your test projects with Katalon’s Windows built-in keywords. The available keyword library helps you quickly set up test cases without putting in more effort in designing the test steps.

Moreover, you can also use your custom keywords to extend the testing capabilities and gain more control over your test projects. Katalon Studio provides you with multiple approaches to either simplify test projects or advance them even further.

Your test artifacts — including test objects, test steps, and custom keywords in Katalon — can be reused and shared across your team in different test cases. Test profiles in Katalon Studio are made to mitigate your effort of maintaining and utilizing your work for the best outcomes.

Why Automation for Desktop App Testing?

In recent years, companies are turning into web and mobile apps to attract and engage with customers. However, from a business perspective, desktop apps still bring benefits to both the business and the product teams.

A desktop app does not require internet connection. So your end-users can have more flexible use and security. Plus, the interactions, performance and control over desktop-based apps is better for the developers than web and mobile apps.

How your customers perceive your desktop app will, in turn, shape their perception of your business brand. Therefore, building and developing a desktop application is a comprehensive process that requires lots of testing, for example, functionality, security, usability, and stability tests, before it is published to the users.

KS7 is jam-packed with brand new features and capabilities that solve test automation problems in teams of any size. Besides desktop app testing, there are also the Smart Waits function, Test Artifacts Sharing, and Private Plugin capabilities.

For more features available in KS7, check out our blog 7 Things to Know About Katalon Studio 7!

Role of Accelerators and Frameworks in Test Automation