In this post I'll go over the github workflow I created that allows me to test bash scripts using BATS against multiple versions of Bash.

The script in question is my Bash-TPL project, which is a light-weight shell-scripting template engine.

I chose BATS as the testing framework, as its comprehensive, tests are easy to write, and its Bash all the way down !

I had already written an extensive suite of tests, so I was confident they would reveal any compatibility issues once I figured out how to run them against older Bash versions.

In researching how I was going to run my tests against older bash versions, I discovered the Official Bash Docker Repository

This made running the tests on a specific bash version very easy to do on my local machine:

So it turned out that my script only worked on Bash 5.1 :(

Once I identified all of the compatibility issues, I was able to work on fixing them, using the above technique to test against multiple Bash versions. Specifically, I ran tests against:

Having successfully fixed the compatibility issues, and making a new release, I set out to create a github workflow to run these tests for me in the future.

I had to determine if I could utilize the previously discovered Bash docker images within a github workflow.

My first goal was to determine if I could run the workflow within just a single docker image.

Thanks to the well-documented Workflow Syntax For Github Guide, I discovered the jobs.<job_id>.container configuration.

This will run your job steps inside the specified container !

Next I needed to install BATS into my fresh new Bash container.

I knew I could issue an apk add bats command, but I wanted to have more control over the actual version of BATS being used.

I figured I probably wasn't the first person who wanted to run BATS in a workflow, so I searched the github actions marketplace.

Sure enough, there was already an action for configuring BATS:

Most importantly, it allows you to declare which version of BATS you want to install.

Now that I could successfully run my tests using a single container, it was time to figure out how to use multiple containers.

From the github workflow documentation of the jobs.<job_id>.strategy.matrix strategy:

You can define a matrix of different job configurations. A matrix allows you to create multiple jobs by performing variable substitution in a single job definition. For example, you can use a matrix to create jobs for more than one supported version of a programming language, operating system, or tool. A matrix reuses the job's configuration and creates a job for each matrix you configure.

I first learned about the github workflow matrix strategy when implementing github-repo-stats to save stat history for all of my repositories.

But What About Containers?

But I couldn't find any examples of a matrix being used for container setup.

I decided to give a try anyway - And It Worked !

Now that I had all the pieces worked out, I could finally implement my workflow.

Below is the version of the workflow at the time of posting:

The BATS tests run successfully on all specified Bash versions, and they're fast! 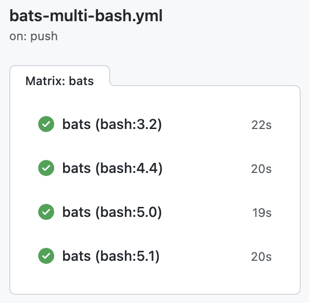 Thank you for reading - I hope you found this post helpful. Please let me know if you have any comments or questions.

Use Multiple Obsidian.md Config Folders And Sync With Github