Note: I uploaded the final code on GitHub.

create-react-app provides a very easy way to generate a React app in seconds. This is currently developed by Facebook, and the recommended way to start a new project.
Open a terminal and go to the desired folder (create-react-app will create a folder for your app). 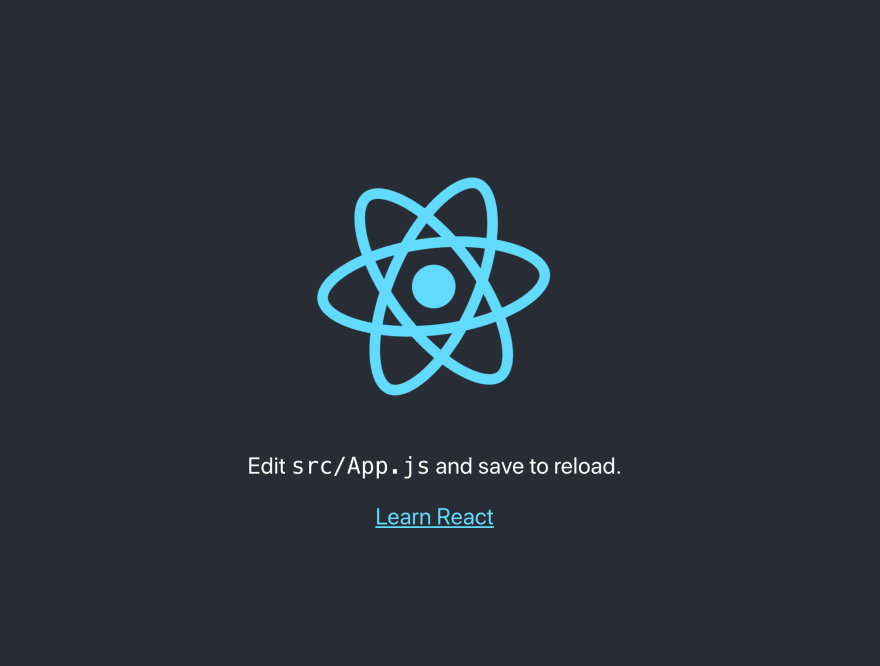 The script will generate a few files, and it should look something like this: 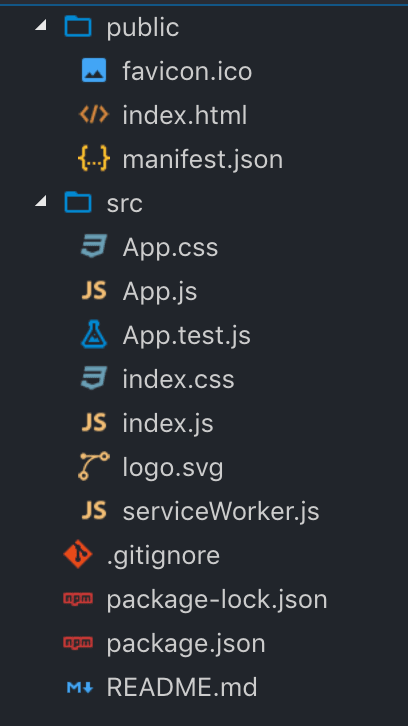 Let's have a look at what's been created:

Let's have a look at the code

First, let's go to index.html, and have a look at this line:

This will be the HTML element to which the React application will be attached.

index.js is the first file that will be loaded in our application.

This line is the one that actually links our React app to the DOM (root node, as we've seen just before).

These two first lines are everything that's necessary to write React code.

These ones are just importing our React components (here App), and our CSS files.

This last line is used only if you are writing a PWA (Progressive Web App, more on this here). Yes, create-react-app is already configured as a PWA!

So what is this App.js doing? Let's have a look:

At the beginning, you can see the standard import React from 'react' that you need to include in every file that uses jsx (this cool HTML-like syntax that we use to write React components).
You may have noticed that we import a file called App.css.
Open it, and look at what's written here:

I'm not going to spend too much time on this, but let's take the example of the first class:

And let's see how we use it in a React component:

As you can see, the main difference with "normal" HTML is that the name of the attribute is className, instead of class.

Enough about create-react-app and the code it generated, it's time to configure our code editor.
VS Code has pretty good defaults (syntax highlighting, autocompletion, 'go to definition', etc). But you can make it even better!

Since JavaScript is not a compiled language, there is nothing that can tell us if something looks like it's going to fail before we actually run it. ESLint solves exactly this problem.

ESLint is the most popular JavaScript linter. A linter is a program that analyses your code, and tries to find potential errors, ahead of runtime. ESLint is highly configurable, and you can extend premade sets of rules, define your own rules, override existing rules, etc.

Luckily, create-react-app already comes with ESlint. So we don't have much to do!

Install the ESLint extension for VS Code. This will allow us to see the result of ESLint directly in VS Code.

Once installed, you can quickly test it. Go to App.js again, and remove this line:

VS Code should start yelling at you:

Prettier is an opinionated code formatter. People used to fight for hours around commas, semi-colons, etc. Prettier is an attempt at ending the debate. Since most editors have a Prettier plugin, you can "autoformat on save", which means you can write ugly code, and never worry about formatting!

You can use Prettier in different ways. My favorite one is to run it as part of the ESLint rules.

Then, create a file, at the root of your app, called .eslintrc.json as such:

So what have we done?

If you have a look at the .eslintrc.json file that we just created, you'll notice that we have added a rule that basically says "everything that Prettier reports should be treated as an error".

Once everything is saved, go back to App.js and have a look at what ESLint is saying now:

So this is all good, now we see what's wrong about our code, but wouldn't it be nice if we could just fix everything automatically? Replacing double quotes with single quotes should be pretty straightforward for a computer, right?

ESLint has an option to autofix every error that can be autofixed. On the command-line, it's --fix, and you can configure your VS Code so that this happens everytime you save.

Create a new folder, at the root of your app, called .vscode, and inside this folder, a file called settings.json:

Go back to App.js, and try saving your file now, it should get reformatted instantly!

So now that we have linting and formatting all sorted, what happens if someone decides to contribute to our code without setting up everything we just set up? It will break everything, and you will be back to coding-style hell. So what can we do about it?

Two packages will help us with that:

First, install them with:

Go to your package.json and add:

And you're done! Now, every time you will try to commit unformatted files, husky will launch lint-staged, which will intercept the process and run ESLint first. And if there's an error ESLint can't fix, it will stop the whole process. Which means you can't commit code that doesn't work anymore!

It is very common in a React project to organise your code in multiple nested folders.

Let's say we decide to implement something like Brad Frost's atomic design for example. A common way to implement it would be (this example is on GitHub): 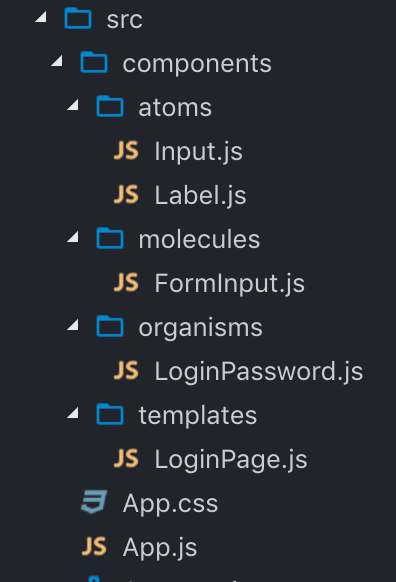 This is all good! But now, if you go to LoginPage.js, and have a look at how we have to import LoginPassword:

Notice the ../ to go up a folder? This will become really hard to follow once we start deeply nesting folders and files.

A good solution for that is something called absolute imports. At the root of your app, create a file called jsconfig.json:

Now you can import your files using an absolute path, starting from ./src/:

While it might not seem like a big deal right now, because we only have one level of nesting, big applications tend to have very deeply nested components, which makes imports look like ../../../../MyComponentFolder/MyComponent very quickly!

Find the final code on GitHub.