EKS and its hunger for IP addresses

Kubernetes allows running highly diverse workloads with similar effort. From a user perspective there's little difference between running 2 pods on a node, each consuming 2 vCPU, and running tens of pods each consuming 0.05 vCPU. Looking at the network however, there is a big difference: Each pod needs to have a unique IP address. In most Kubernetes implementations there is a CNI plugin that allocates each pod an IP address in an IP space that is internal to the cluster.

EKS, the managed Kubernetes offering by AWS, by default uses the Amazon VPC CNI plugin for Kubernetes. Different to most networking implementations, this assigns each pod a dedicated IP address in the VPC, the network the nodes reside in.

What the VPC CNI plugin does 1 boils down to this:

Now if we look at the list of available IP addresses per ENI and calculate an example:

We can see where this is going. So, creating /16 VPCs it is then? Probably not.

In a lot of organizations there is not just one VPC. The networking landscape might be a combination of:

There are many ways to connect VPCs and other networks. The larger the CIDR range is that needs to be routable from outside the VPC, the more likely it becomes that there is overlap.

As a result, in larger organizations, individual AWS accounts are typically provided a VPC with a relatively small CIDR range, that fits in the larger networking plan. To still have 'lots of ips', AWS VPCs can be configured with with secondary CIDR ranges.

This solves the IP space problem, however does not by itself solve the routing problem. The secondary CIDR range would still need to be unique in the total networking landscape to be routable from outside the VPC. This could not be an actual problem if workloads in the secondary CIDR only need to connect to resources within the VPC but this very often is not the case.

Quite recently AWS introduced Private NAT gateways which, together with custom networking, are options to facilitate routable EKS pods in secondary CIDR ranges.

Let's go over some VPC setups to illustrate the problem and see how we can run EKS.

A basic VPC consists of a single CIDR range, some private and public subnets, a NAT gateway and an Internet Gateway. Depending on the primary CIDR range size this might be sufficient, but in the scope of larger organizations let's assume a relatively small CIDR range. 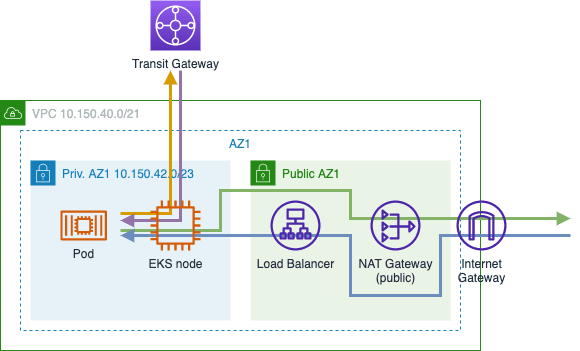 Next step: Adding a secondary CIDR range, placing nodes and pods in the secondary subnets. This could work if workloads never need to connect to resources in private networks outside the VPC, which is unlikely. Theoretically pods would be able to send packets to other VPCs but there is no route back.

To remedy the routing problem, custom networking can be enabled in the VPC CNI plugin. This allows placing the nodes and pods in different subnets. Nodes go into the primary private subnets, pods go into the secondary private subnet. This solves the routing problem since by default, for traffic to external networks, the CNI plugin translates the pods IP address to the primary IP address of the node (SNAT). In this setup those nodes are in routable subnets.

Setting up secondary CIDR ranges and custom networking is described in the AWS knowledge center and also in the Amazon EKS Workshop.

Be aware that Source Network Address Translation is disabled when using security groups for pods2:

Instead of configuring custom networking, it is also possible to solve the routing problem by using a private NAT gateway. Unlike a public NAT gateway, it is placed in a private subnet and is not linked to an internet gateway.

This way nodes and pods can run in the secondary CIDR range, and the routing problem is solved outside of EKS.

One NAT gateway is enough

Let's take a look at the most basic route table one can set up for the secondary private subnet:

This puts any non-VPC traffic into the primary private subnet, and lets the route table that is configured there do the rest. Simple, but there is a catch3 which we can observe when testing internet connectivity from a node.

Halving the amount of traffic passing through NAT gateways is halving the cost (ignoring the fixed fee of a NAT gateway).

The above illustrates that it is important to replicate route table entries for VPC endpoints and peering connections, that exist in the primary private subnets, to avoid traffic unnecessarily passing through the private NAT gateway. It will (probably) work but it brings unneeded cost.

A reminder: Since the planets that are DNS, routing and security groups need to align, be sure to grant the secondary CIDR range access to any VPC endpoint of the type 'Interface' that exist in the VPC. Not doing so will have DNS return a VPC-local IP address which will not go through the private NAT gateway and hence will be blocked by the security group on the VPC endpoint.

Private NAT gateways can be an alternative to custom networking when running EKS pods in secondary CIDR ranges. As always, there are trade-offs that need to be considered, including:

The above should give some insight in the world of EKS networking and hopefully provides pointers to what to investigate more deeply and what pitfalls to avoid. As always, feel free to reach out on Twitter to discuss!

Let's learn Heroku once and for all (a series)

Once suspended, tbeijen will not be able to comment or publish posts until their suspension is removed.

Once unsuspended, tbeijen will be able to comment and publish posts again.

Once unpublished, all posts by tbeijen will become hidden and only accessible to themselves.

If tbeijen is not suspended, they can still re-publish their posts from their dashboard.