Yes, this is a real type declaration in C, and we'll see just how to use it and how to deal with complicated types.

One of the C language's superpowers is its low-level memory management.

You've likely manipulated memory before. Most languages allow you to pass variables by reference (i.e. its memory address) as well as by value (i.e. a copy is made so that there are no side effects).

C gives developers a standard low-level interface to program memory on both the heap and the stack.

An important part of this interface is pointer types.

Put simply, a pointer is a variable that stores a memory address to another variable. 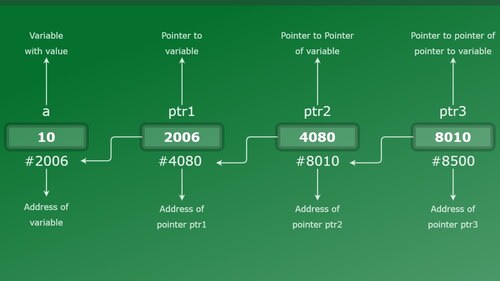 Using the awesome converter at cdecl.org, we can see what this type declaration really means.

Now that we understand the individual components, let's create it!

A function that doesn't return anything (i.e. a procedure) is a void function.

For this, we'll define a function that prints "Apple!".

Pointer to a Function returning Void

This is simple. It's a pointer to the function that we just declared.

We need a function that returns &apple. The hard part here is the type signature.

One mistake I made initially was declaring this as void *pointer_to_apple(). This would be incorrectly returning a Pointer to Void, as opposed to a Pointer to a Function returning Void.

You may wish to look at the syntax of Function Pointers in order to understand this better.

This is simple again. It's a pointer to this new function.

The final step, and an easy one at that. Pretending we defined two similar sets of functions and pointers, we can an array of these new pointers.

Let's define a variable with this array.

We can now iterate through the array to print our various fruits.

The only boilerplate here is getting the size of a void (*(*[])())(). This is standard for iterating through arrays in C, as using the sizeof operator to determine the size of arrays is error prone.

You can check this code out in my GitHub repository.

Hey, guys! Thank you for reading. I hope that you enjoyed this.

Keep up to date with me:

Try these 4 languages from 4 corners of Programming

Why is artificial intelligence driven by Python and not C++?