In this blog/tutorial I will not tell your more theory which you you can already find on google instead my goal is to make this blog as crisp and to the point as possible. So whenever you need to revise kubernetes you can read through it for 5 minutes and you are up and running like a container 😅. So lets get started!

Kubernetes is an open source container orchestration system which is used to automate deployment, scaling and management of containerized application.

Why we need kubernetes ?
Container orchestration engine like K8s have following features:

The various processes like Kube-apiserver (The Kubernetes API server validates and configures data for the api objects which include pods, services, replicationcontrollers, and others.) and Kubelet processes govers how kubernetes will communicate with your cluster.
The Control Plane maintains a record of all of the Kubernetes Objects in the system, and runs continuous control loops to manage those objects’ state.
At any given time, the Control Plane’s control loops will respond to changes in the cluster and work to make the actual state of all the objects in the system match the desired state that you provided.

For example, when you use the Kubernetes API to create a Deployment object, you provide a new desired state for the system. The Kubernetes Control Plane records that object creation, and carries out your instructions by starting the required applications and scheduling them to cluster nodes–thus making the cluster’s actual state match the desired state.

The nodes in a cluster are the machines (VMs, physical servers, etc) that run your applications and cloud workflows. The Kubernetes Control Plane controls each node; you’ll rarely interact with nodes directly. 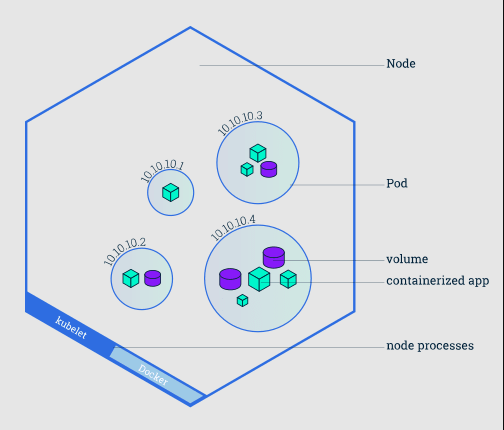 Kubernetes contains a number of abstractions that represent the state of your system: deployed containerized applications and workloads, their associated network and disk resources, and other information about what your cluster is doing. These abstractions are represented by objects in the Kubernetes API.

A Pod is the basic building block of Kubernetes–the smallest and simplest unit in the Kubernetes object model that you create or deploy. A Pod represents a running process on your cluster.

A Pod encapsulates an application container (or, in some cases, multiple containers), storage resources, a unique network IP, and options that govern how the container(s) should run. A Pod represents a unit of deployment: a single instance of an application in Kubernetes, which might consist of either a single container or a small number of containers that are tightly coupled and that share resources.

Pods in a Kubernetes cluster can be used in two main ways:

Each Pod is meant to run a single instance of a given application. If you want to scale your application horizontally (e.g., run multiple instances), you should use multiple Pods, one for each instance.

In Kubernetes, this is generally referred to as replication. Replicated Pods are usually created and managed as a group by an abstraction called a Controller, for example a ReplicaSet controller (to be discussed) maintains the Pod lifecycle. This includes Pod creation, upgrade and deletion, and scaling.

Containers in a pod run in the same Network namespace, so they share the same IP address and port space.

All the containers in a pod also have the same loopback network interface, so a container can communicate with other containers in the same pod through localhost.

While ReplicaSets can be used independently, today it’s mainly used by Deployments as a mechanism to orchestrate Pod creation, deletion and updates. When you use Deployments you don’t have to worry about managing the ReplicaSets that they create. Deployments own and manage their ReplicaSets.

Kubernetes Pods are mortal. They are born and when they die, they are not resurrected. ReplicaSets in particular create and destroy Pods dynamically (e.g. when scaling up or down). While each Pod gets its own IP address, even those IP addresses cannot be relied upon to be stable over time. This leads to a problem: if some set of Pods (let’s call them backends) provides functionality to other Pods (let’s call them frontends) inside the Kubernetes cluster, how do those frontends find out and keep track of which backends are in that set?

A Kubernetes Service is an abstraction which defines a logical set of Pods and a policy by which to access them - sometimes called a micro-service. The set of Pods targeted by a Service is (usually) determined by a Label Selector.

As an example, consider an image-processing backend which is running with 3 replicas. Those replicas are fungible - frontends do not care which backend they use. While the actual Pods that compose the backend set may change, the frontend clients should not need to be aware of that or keep track of the list of backends themselves. The Service abstraction enables this decoupling.

For Kubernetes-native applications, Kubernetes offers a simple Endpoints API that is updated whenever the set of Pods in a Service changes. For non-native applications, Kubernetes offers a virtual-IP-based bridge to Services which redirects to the backend Pods.
Note: An endpoint is a remote computing device that communicates back and forth with a network to which it is connected. Examples of endpoints include: Desktops. Laptops.

NameSpaces - Namespaces provide a scope for names. Names of resources need to be unique within a namespace, but not across namespaces.
Namespaces are intended for use in environments with many users spread across multiple teams, or projects.
Namespaces are a way to divide cluster resources between multiple users (via resource quota).
It is not necessary to use multiple namespaces just to separate slightly different resources, such as different versions of the same software: use labels to distinguish resources within the same namespace.

A StatefulSet manages the deployment and scaling of a set of Pods, and provides guarantees about the ordering and uniqueness of these Pods.
StatefulSets are valuable for applications that require one or more of the following.

Use cases for StatefulSets are:

Deploying a clustered resource (e.g. Cassandra, Elasticsearch)
Applications that somehow depend on each other

Thanks for keeping DEV Community safe. Here is what you can do to flag tanmaygi: