In this short (but wordy) guide, I would like to show you how you can set up a RedwoodJS application using Postgres to run in a VSCode Dev Container or Github Codespaces.

But first, if you're not sure what RedwoodJS is, it's an open-source full-stack web framework that makes building applications extremely easy. Think of Ruby on Rails, but all in JavaScript using libraries you might already be familiar with and extremely easy to set up. You can check it out here https://redwoodjs.com/docs/introduction.

RedwoodJS is easy to set up and start, but what would make it even better? Making it extremely easy to get your developer environment set up and running with a couple of clicks and compatible with Github Codespaces. This short guide will give you a template needed to do just that!

We will use the Visual Studio Code Dev Container extension/feature to accomplish this goal. It's a fantastic tool I use almost daily to run my projects in what I like to think of as a development sandbox. Since each project runs in its own sandbox, it doesn't have to worry about installing different Ruby, Rails, NodeJS, Elixir, or Erlang to get my project up and running on my computer. So let's get to it.

Required To Get Started

Alright, to get started, open up your RedwoodJS project in VSCode. If you don't have one, it's as simple as.

Now let's install the Remote Development extension. It should look like the following image.

The Remote Development extension package contains everything we would need and more to use Docker as a remote development environment.

You will see a list of pre-built definitions. Well, go with the Node.js & PostgreSQL since it is already almost everything we need to get RedwoodJS up and running. 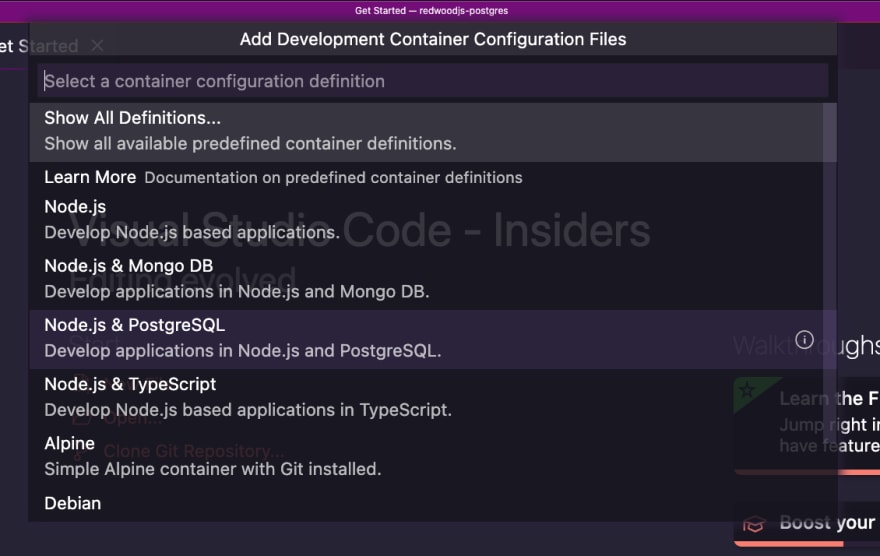 You will next be asked which version of Node.js you would like your sandbox to run. Let's stick with the default.

The last window allows you to install additional packages/features, but clicking "OK" in the top right will be good enough. 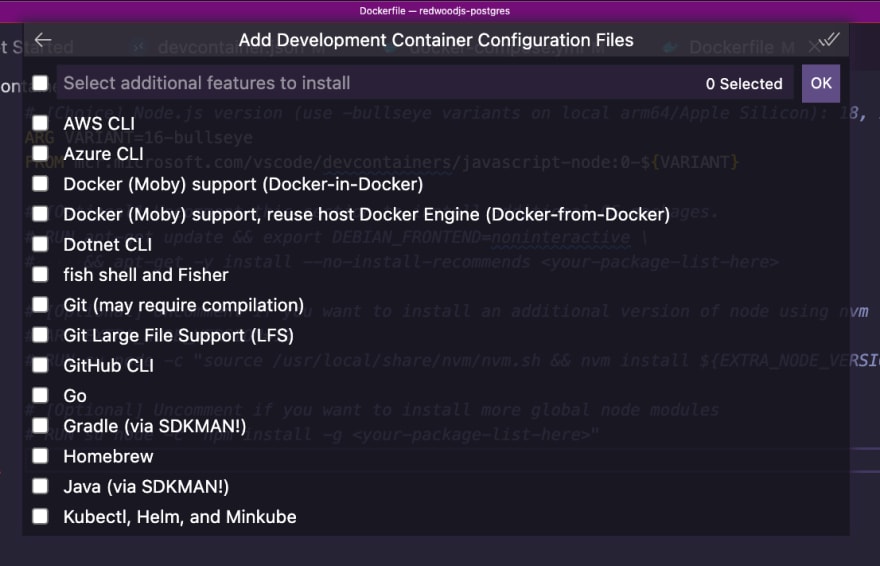 You should now see a new folder in your project called .devcontainer. Inside it will be 4 files, devconatiner.json, docker-compose.yml, create-db-user.sql and Dockerfile.

Well, ignore create-db-user.sql since it's unimportant for this guide. We also won't be touching the Dockerfile but it's what Docker will use to build a development environment with all bells and whistles we need to run Node.js and more.

Let's open up docker-compose.yml file. We will need to make a minor tweak to it. If you dont know what docker-compose is, it's a tool to tell Docker how to step up containers that will run services we would like. Usually, most web development projects need 2-3 services. One service is your web server, RedwoodJS, for us, and another service would be a database like Postgres.

Out of the box, RedwoodJS will use SQLite, but most of the time, I find myself using Postgres in production, and wouldn't it be cool to emulate production? Using Development Container makes it super easy to use Postgres locally, also. So let's try making our local environment run.

Our new docker-compose.yml already comes pre-configured with an app container we will use to develop inside. Looking closely, you will see this container is based on our Dockerfile image. It also has a db container to run our development Postgres database. We need to add one more thing, a container to run our test database. I have annotated the code below to add a db-test container and corresponding volumes. You might be able to copy and paste the whole thing.

Now let's open up your .devcontainer.json file. This file is specifically for VSCode. It tells it how to run our development container. More specially, the docker-compose file to use, which container we will use to do development inside, and the extension we would like to install by default. The extension configuration is super lovely, or anyone who works with you will have the same extension automatically installed to make their dev life more effortless. Finally, you can copy and paste the code below into the file.

The last phase of our changes is going to be with RedwoodJS. Since we're setting up our local development to run Postgres, we need to update some things in our RedwoodJS.

First, let's update our schema.prisma file to run Postgres. Then, update your provider, like in the example below.

Next, we need to open and update our .env file. Since we changed to using Postgres, we need to change DATABASE_URL and TEST_DATABASE_URL to point to our Postgres database containers and use the credentials that are set in the docker-compose.yml. Looking back at the docker-compose.yml file, you will see where we got the username, password, and database name. Another important bit is to set the RWJS_DEV_API_URL variable so routing happens properly from within our container to the GQL server.

Now we're in the home stretch. Let's get your project running in its Development Container. Bring up the command palette using Command + Shift + P on Mac and Ctrl + Shift + P on Windows. Type in "reopen in container" and select "Reopen in Container" option.

This last step will take a little while. It will be downloading the Docker images for your development environment and Postgres, then building it. So sit tight, grab a cup of tea, and get a stretch break-in.

Once done, your VSCode should open up to what looks like a typical project, but with one secret. Your VSCode is connected to your docker container and running inside. The area you will notice the most significant difference will be the terminal.

It says you are inside the workspace folder, and your user is node. If you were to change directories and move up one, you would see completely different folders on your regular computer. You are now in your developer sandbox. Now run yarn redwood dev to start your server and see the magic happen. A bonus to all this work is that it will also work in Github Codespaces.

If there is anything still fuzzy or like me to elaborate further, let me know. I will make sure to do so.

Once suspended, talk2megooseman will not be able to comment or publish posts until their suspension is removed.

Once unsuspended, talk2megooseman will be able to comment and publish posts again.

Once unpublished, all posts by talk2megooseman will become hidden and only accessible to themselves.

If talk2megooseman is not suspended, they can still re-publish their posts from their dashboard.

Once unpublished, this post will become invisible to the public and only accessible to Erik Guzman.

Thanks for keeping DEV Community 👩‍💻👨‍💻 safe. Here is what you can do to flag talk2megooseman:

Unflagging talk2megooseman will restore default visibility to their posts.