First of all, let’s see what is a circular dependency. According to this Wikipedia:

In software engineering, a circular dependency is a relation between two or more modules which either directly or indirectly depend on each other to function properly. Such modules are also known as mutually recursive. 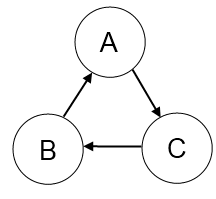 Alright, what does it mean? Well, to understand it properly let’s clone this repository and cd into src/good dir & inspect the files.

When we execute main.ts by npx ts-node main.ts here is the output:

When we execute main.ts by npx ts-node main.ts here is the output:

What is going on? In the last line instead of John, we are seeing undefined. Didn’t we import the variable correctly? Yes, we did. But it is happening because of the circular dependency problem. Look at the problem dir flow above. File a.ts is dependent on b.ts & b.ts dependent on a.ts.

How it’s happening let’s talk about it another time, but before that let’s see how we can detect it.

In a small program like this, it’s not a big problem to detect circular dependency. But in a large codebase, once we depend on a wrong module accidentally, then it’s tough to detect this later on. So today we are gonna use a tool call madge. Let’s see how we are gonna use it.

What do you see? No problems found. Right? Yeah. Because there is no circular dependency problem.

What do you see? It’s awesome, right? The way it shows which files are circularly depending on what files, in a large codebase, it saves a lot of time.

Oiya, before we forget, of course in a large codebase we use tsconfig.json. If we have module aliases or something like that, we have to point to that tsconfig.json. So in that case we can add another flag like this:

If we do not use typescript, we don’t have to use --ts-config flag as well as ts in the --extensions flag.

Alright, enough for today. Next, hopefully, we will talk about how circular-dependency gets created underneath. Thank You.

Once suspended, tahsinature will not be able to comment or publish posts until their suspension is removed.

Once unsuspended, tahsinature will be able to comment and publish posts again.

Once unpublished, all posts by tahsinature will become hidden and only accessible to themselves.

If tahsinature is not suspended, they can still re-publish their posts from their dashboard.

Once unpublished, this post will become invisible to the public and only accessible to Tahsin.

Thanks for keeping DEV Community safe. Here is what you can do to flag tahsinature:

Unflagging tahsinature will restore default visibility to their posts.