DynamoDB is an AWS fully managed NoSQL database that is well known for being very simple to use. This simplicity is great for newcomers, as long as the problem being solved doesn't require complex schemas. Issues arise for most people when trying to design systems with multiple tables in mind. This is usually where working with DynamoDB can become very complicated for newcomers.

In this post we will be covering off how you can make use of Amazon's new NoSQL Workbench tool to design DynamoDB schemas.

Throughout this post are going to be building a game leaderboard system on DynamoDB. This problem might seem simple, however there is some hidden complexity that will soon be apparent. To accomplish this we'll work through the following steps.

NoSQL Workbench can be downloaded from here and is available on both Mac & Windows.

Note: Unfortunately there is no Linux client yet 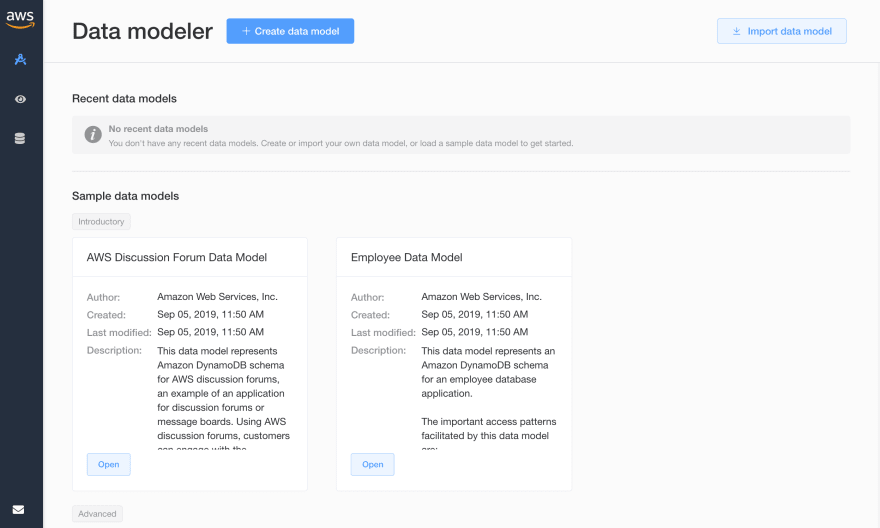 Let's say that you are a mobile game startup that had created a very successful video game called AppleKart. AppleKart has a variety of game modes:

Each of these modes have a multiplayer aspect in the format of a global scoreboard. We'd like to keep the data we're working with simple so it was decided that the unique key would be the users identifier (UserID). The problem we're faced with is that a score field needs to be stored for each game mode for each user.

First thought might be to do something seen below:

The problem here is that UserID is the only unique key we are given. When adding a new entry for a different game mode the previous entry will be overridden. Traditionally we probably would end up using a separate table for each game mode, however we aren't given this luxury in NoSQL land.

Instead we're able to make use of a Sort Key; which when paired with the primary key makes the entry unique.

With the previous information in mind let's design a simple model using NoSQL Workbench. Start off by creating a new data model by clicking the button up the top of the Data modeler.

Next we can define our table attributes: 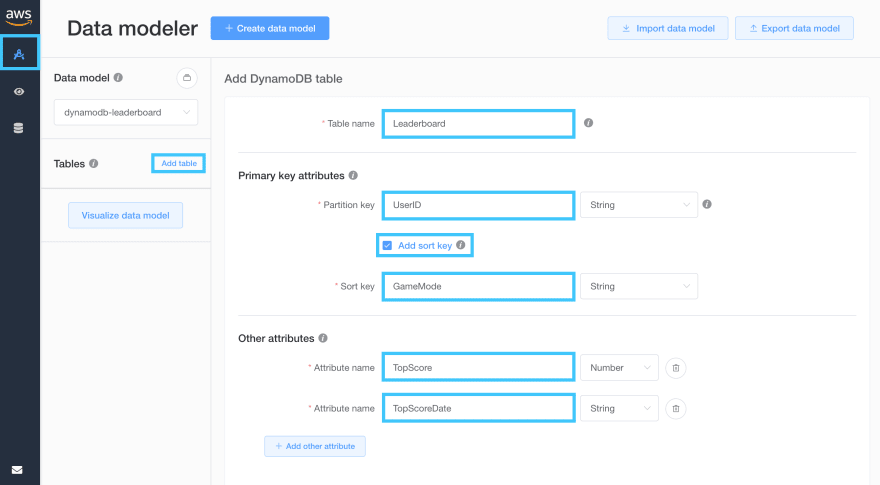 With the table model setup it's time to import some data to play with. To begin with navigate to the NoSQL Workbench Visualizer and select your Leaderboard table

Start by having a go manually importing data and you'll soon grow tired at the thought of having to add these by hand.

Note: Docker & docker-compose will be required for this step

Then use docker-compose up -d to bring up the SQL container followed by docker ps -a to view the status.

Head back to NoSQL Workbench and now open import data from SQL database.

You to define a statement to be run in-order to import the data. In our case it can be found below

I've included an example of how to remap keys by using the as operator. Click Import to proceed to the next modal that will prompt for SQL connection details 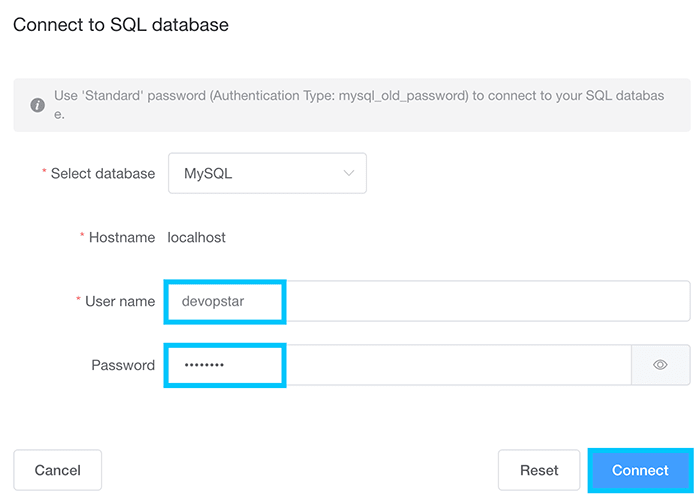 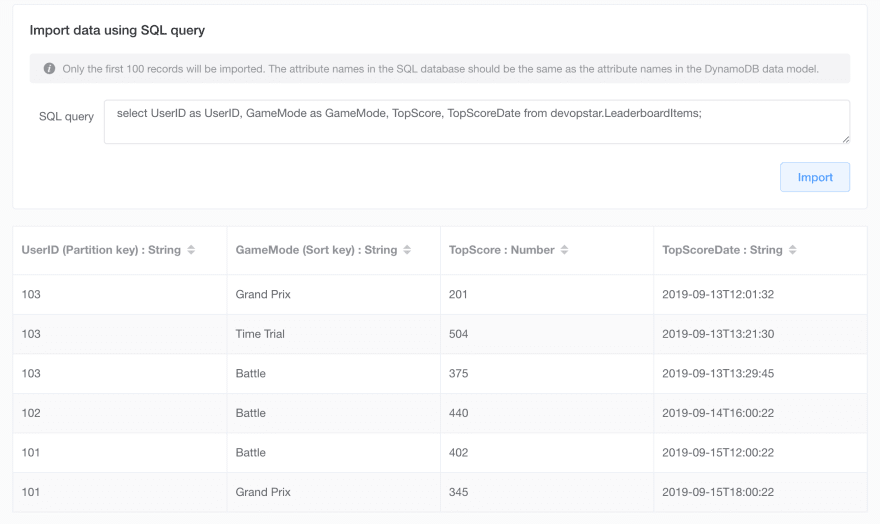 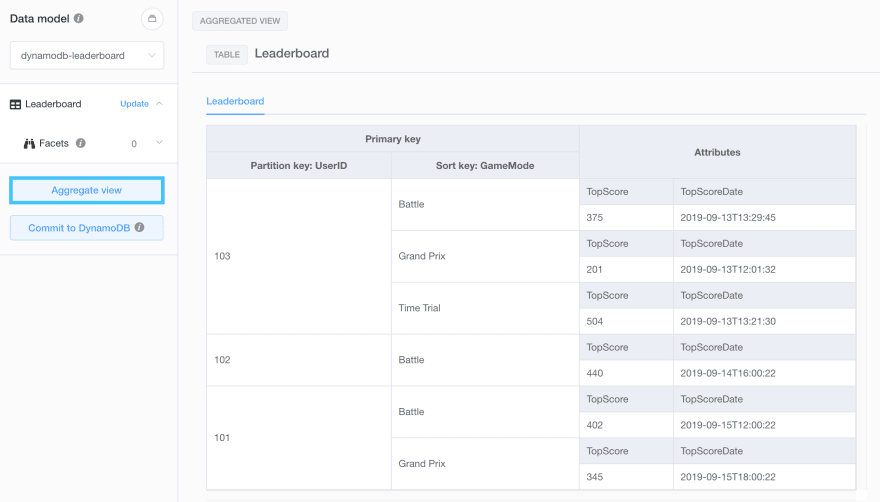 Although it might look impressive we have yet to solve any major problems. The main issue we will inevitably face is how to retrieve the top score of a given game mode?

This is another example of where people might go and use a second table for rankings. Instead of doing that, we can make use of Global Secondary Indexes (GSI) to create a different way of accessing our data. Seen below is how we can accomplish this:

This index will allow us to sort TopScore attributes for each given game mode. Let's edit our existing model to include the new index 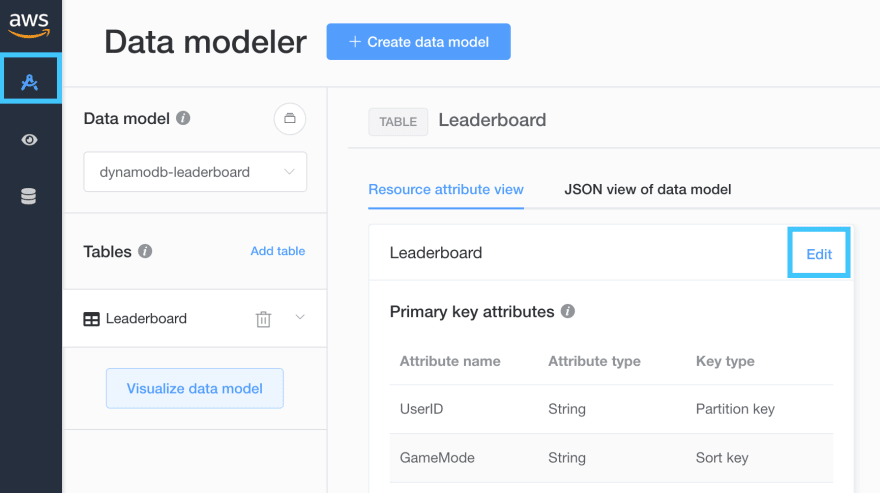 Create a new GSI and setup the schema as follows 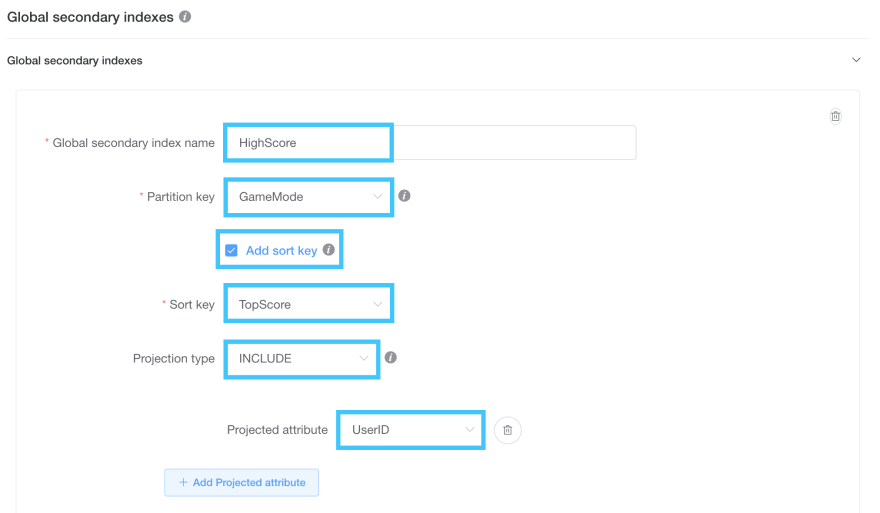 Note: There appears to be a NoSQL Workbench bug when trying to render this GSI. It might be fixed in the future however for now you can see what it would look based on the committed schema in DynamoDB below: 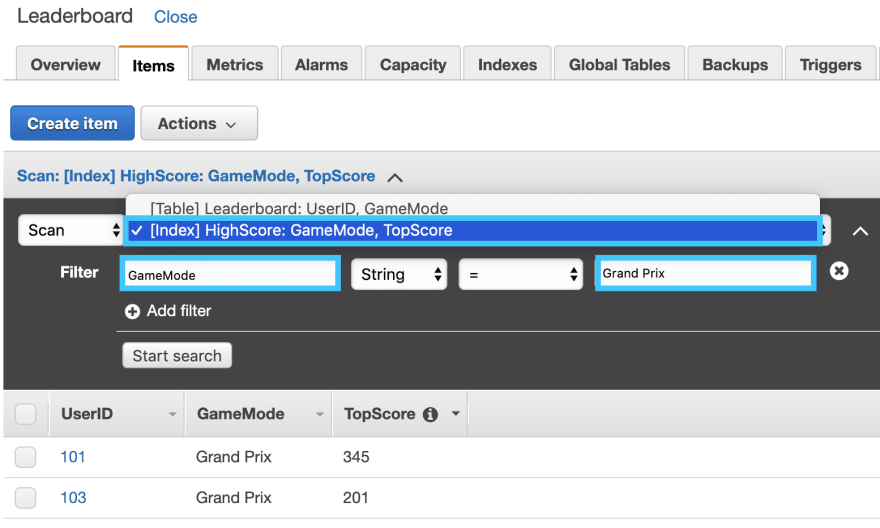 NoSQL Workbench is a great tool for beginners and experts. It allows you to prototype schema designs in a simple and intuitive way along with acknowledging that data might not already be in NoSQL formats and providing tooling to cater for that.

How to Build a Cool GitHub Profile in 2 Minutes