When working with containers in Kubernetes, it’s important to know what are the resources involved and how they are needed. Some processes will require more CPU or memory than others. Some are critical and should never be starved.

Knowing that, we should configure our containers and Pods properly in order to get the best of both.

In this article, we will see:

Introduction to Kubernetes Limits and Requests

Limits and Requests are important settings when working with Kubernetes. This article will focus on the two most important ones: CPU and memory.

Kubernetes defines Limits as the maximum amount of a resource to be used by a container. This means that the container can never consume more than the memory amount or CPU amount indicated.

Requests, on the other hand, are the minimum guaranteed amount of a resource that is reserved for a container. 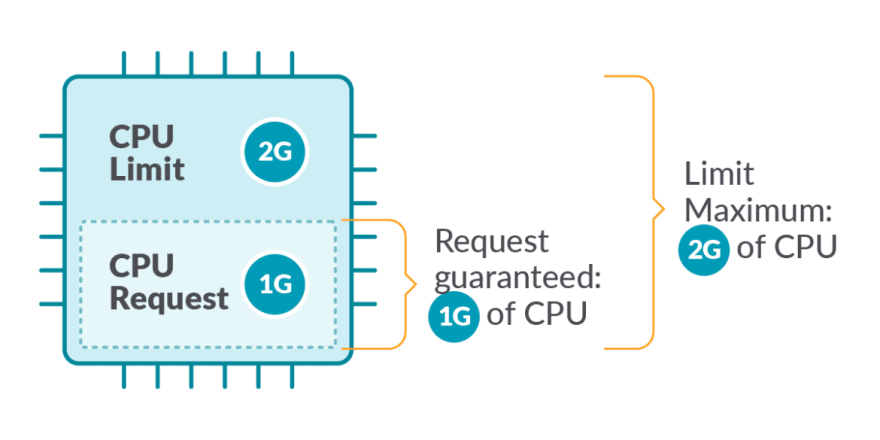 Let’s have a look at this deployment, where we are setting up limits and requests for two different containers on both CPU and memory.

Let’s say we are running a cluster with, for example, 4 cores and 16GB RAM nodes. We can extract a lot of information: 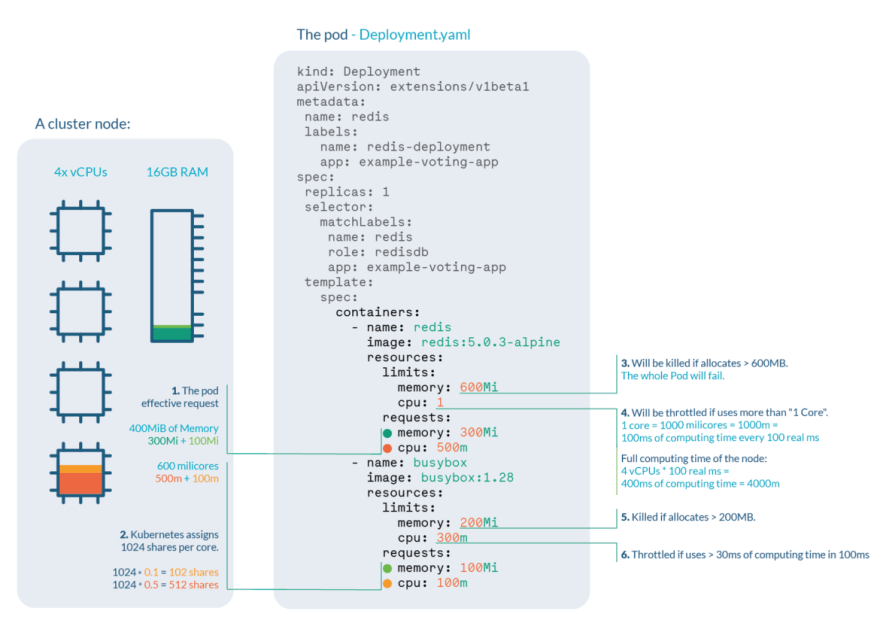 Kubernetes defines requests as a guaranteed minimum amount of a resource to be used by a container.

Basically, it will set the minimum amount of the resource for the container to consume.

When a Pod is scheduled, kube-scheduler will check the Kubernetes requests in order to allocate it to a particular Node that can satisfy at least that amount for all containers in the Pod. If the requested amount is higher than the available resource, the Pod will not be scheduled and remain in Pending status.

In this example, in the container definition we set a request for 100m cores of CPU and 4Mi of memory:

Kubernetes defines limits as a maximum amount of a resource to be used by a container.

This means that the container can never consume more than the memory amount or CPU amount indicated.

CPU is a compressible resource, meaning that it can be stretched in order to satisfy all the demand. In case that the processes request too much CPU, some of them will be throttled. 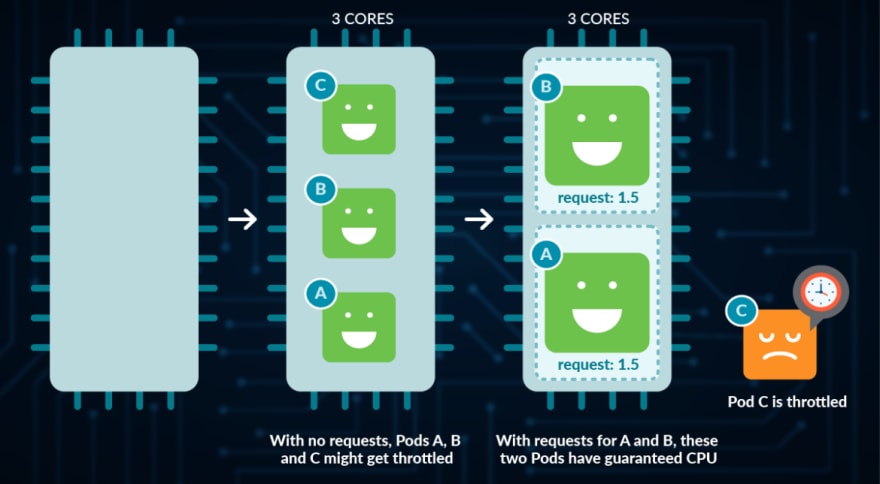 Memory is a non-compressible resource, meaning that it can’t be stretched in the same manner as CPU. If a process doesn’t get enough memory to work, the process is killed.

Memory is measured in Kubernetes in bytes.

A Mebibyte (and their analogues Kibibyte, Gibibyte,...) is 2 to the power of 20 bytes. It was created to avoid the confusion with the Kilo, Mega definitions of the metric system. You should be using this notation, as it's the canonical definition for bytes, while Kilo and Mega are multiples of 1000 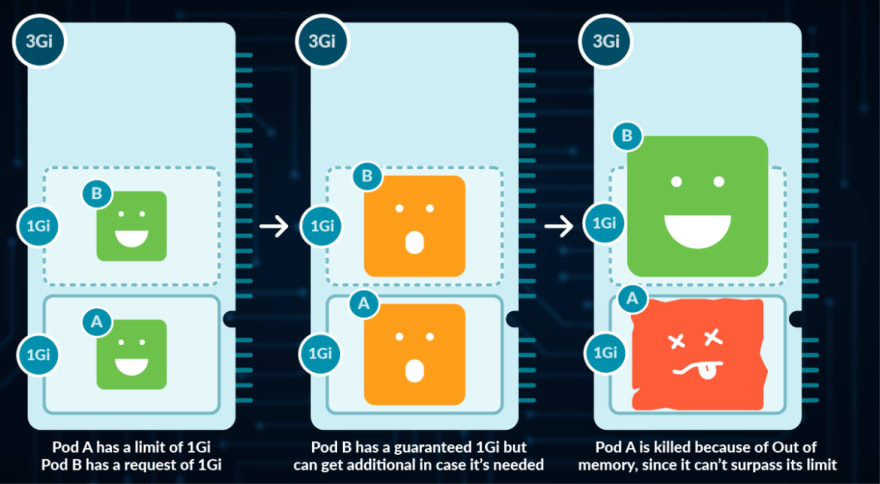 In very few cases should you be using limits to control your resources usage in Kubernetes. This is because if you want to avoid starvation (ensure that every important process gets its share), you should be using requests in the first place.

By setting up limits, you are only preventing a process from retrieving additional resources in exceptional cases, causing an OOM kill in the event of memory, and Throttling in the event of CPU (process will need to wait until the CPU can be used again).

For more information, check the article about OOM and Throttling.

If you’re setting a request value equal to the limit in all containers of a Pod, that Pod will get the Guaranteed Quality of Service.

Note as well, that Pods that have a resource usage higher than the requests are more likely to be evicted, so setting up very low requests cause more harm than good.For more information, check the article about Pod eviction and Quality of Service.

Thanks to namespaces, we can isolate Kubernetes resources into different groups, also called tenants.

With ResourceQuotas, you can set a memory or CPU limit to the entire namespace, ensuring that entities in it can’t consume more from that amount.

Then, apply it to your namespace:

You can list the current ResourceQuota for a namespace with:

Note that if you set up ResourceQuota for a given resource in a namespace, you then need to specify limits or requests accordingly for every Pod in that namespace. If not, Kubernetes will return a “failed quota” error:

In case you try to add a new Pod with container limits or requests that exceed the current ResourceQuota, Kubernetes will return an “exceeded quota” error:

ResourceQuotas are useful if we want to restrict the total amount of a resource allocatable for a namespace. But what happens if we want to give default values to the elements inside?

LimitRanges are a Kubernetes policy that restricts the resource settings for each entity in a namespace.

Later, if you create a new Pod with no requests or limits set, LimitRange will automatically set these values to all its containers:

Now, imagine that you add a new Pod with 1200M as limit. You will receive the following error:

Note that by default, all containers in Pod will effectively have a request of 100m CPU, even with no LimitRanges set.

Choosing the optimal limits for our Kubernetes cluster is key in order to get the best of both energy consumption and costs.

Oversizing or dedicating too many resources for our Pods may lead to costs skyrocketing.

Undersizing or dedicating very few CPU or Memory will lead to applications not performing correctly, or even Pods being evicted.

For requests, use them when you need to ensure a process gets a guaranteed share of a resource.

With Sysdig Monitor new feature, cost advisor, you can optimize your Kubernetes costs 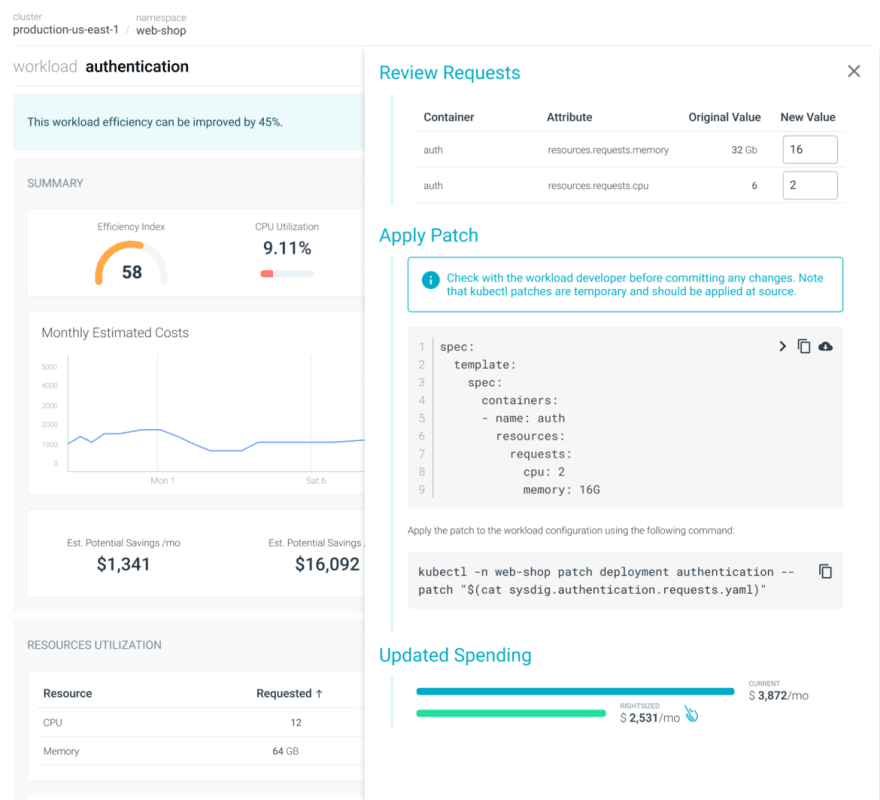 Getting Started With Skaffold

How much salary does a Kubernetes engineer get?

Once suspended, sysdig will not be able to comment or publish posts until their suspension is removed.

Once unsuspended, sysdig will be able to comment and publish posts again.

Once unpublished, all posts by sysdig will become hidden and only accessible to themselves.

If sysdig is not suspended, they can still re-publish their posts from their dashboard.

Once unpublished, this post will become invisible to the public and only accessible to Javier Martínez.

Thanks for keeping DEV Community 👩‍💻👨‍💻 safe. Here is what you can do to flag sysdig:

Unflagging sysdig will restore default visibility to their posts.