Your organization may be trying services in the cloud, running a few applications, or totally embracing this new era of cloud. Regardless if you are in the early stages or running all of your workloads in production, you have likely already noticed that cloud-native security is different from IT-managed data center security.

A recent Gartner survey found that 50 percent of participating organizations indicated that there is a lack of internal knowledge about cloud-native security.

Security teams are trying to figure out the right security solutions to use in the cloud, but the market is evolving too fast for them to keep up. So, what are those terms you keep hearing from vendors, cloud providers, and security training courses? What are the things you should focus on?

Gartner, Forrester, IDC, and 451 Group are some of the most well-known analyst firms that identify and describe emerging trends in the market and create definitions for new technologies. They have coined terms you know, like SIEM, CRM, and WAF. But we want to introduce you to new terms, such as CSPM, CWPP, and CIEM, among others. 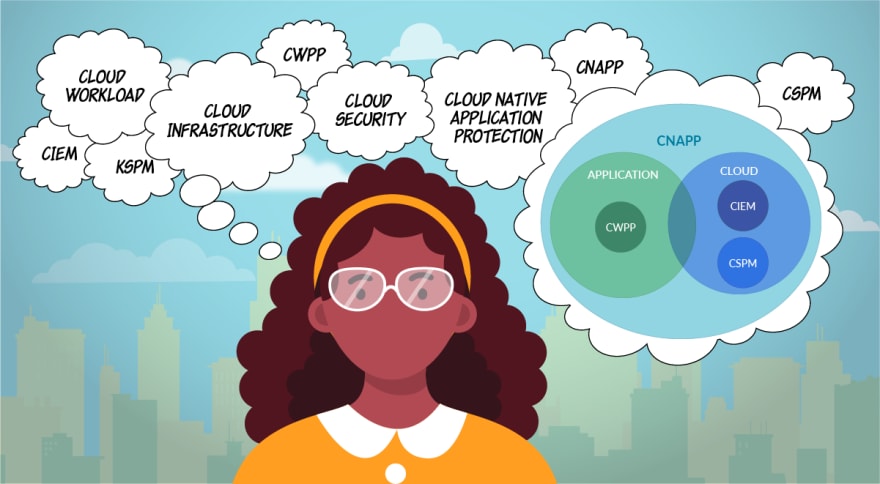 One of the latest categories mentioned in Gartner’s Emerging Technologies: Future of Cloud-Native Security Operations is CNAPP. Where does this new term fit in? We can think of CNAPP as the convergence of CWPP, CSPM, and CIEM, plus some other goodies. I know that’s not a very helpful definition since you may not know what CWPP, CSPM, and CIEM mean yet, right?

Let’s find out step by step.

It all started with DevOps teams moving their workloads to the cloud.

What are these use cases?

Those are the use cases that would fall under a Cloud Workload Protection Platform (CWPP) solution, and what a CWPP solution will handle, securing workloads across the application lifecycle.

As the workloads moved to the cloud and DevOps teams started to provision their own infrastructure, security teams that were used to having a controlled environment in local data centers realized their perimeter had widened.Thus, security teams in charge of securing cloud infrastructure need a different approach. They must also quickly adapt to the dynamic nature of the ephemeral infrastructure.

Cloud-bound teams must also quickly adapt to the new paradigm of the cloud infrastructure environment (immutable infra, the policy as code, and identity as the new perimeter, among others).

Like in local data centers, security professionals had to be sure to meet compliance in the hosts instances, user accounts, and data privacy. But the lack of visibility to know what assets they have in the cloud makes it really difficult to keep track of misconfigurations in those assets.

Cloud Security Posture Management (CSPM) is the solution that unifies the different use cases aimed to protect the cloud control plane, basically tracking cloud resources and verifying the static configuration of the cloud. Some CSPM solutions will add extended capabilities, like providing remediation.

Also, one of the main use cases of CSPM is to check that cloud settings are following best practices. Having mapped out-of-the-box frameworks controls and benchmarks can save cloud teams time when addressing things like:

Getting notified if a violation occurs lets teams take action to prioritize its remediation.

As mentioned before, when the perimeter was the local data center, it was easier to control who had access to what. Now, even serverless functions can act like users who access data.

To address the cloud permissions gap, we have Cloud Infrastructure Entitlement Management (CIEM). With CIEM, you would not only know which human and non-human identities can access which resource, but what permission they are using on a daily basis, and suggest policy modifications to enforce least privilege access.

Let’s say we have a group of users who are part of a project. These users are responsible for uploading images into an ECR repository and running those containers in EC2 instances, as well as a number of auto-scaling actions. There’s no need for them to have all the permissions an administrator has, even though that approach may be the simplest to configure. Are they going to be deleting VPCs? That is not one of their tasks. Getting rid of excessive permissions is the first step to reducing collateral damage from credential theft.

If you make it here, congratulations! You are about to uncover the figure after connecting the dots.

We were saying CNAPP is the combination of different use cases that fall into the CWPP, CSPM, and CIEM categories, but let’s go to the source:

“Cloud-native application protection platform (CNAPP) provides more than CWPP-CSPM convergence: There are two important drivers for CNAPP. Firstly, CWPP vendors are looking to posture to provide workload context. Secondly, CSPMs are challenged to provide more and more visibility while “drilling down” into the workload. CNAPP integrates CSPM and CWPP to offer both, and potentially augments them with additional cloud security capabilities.” 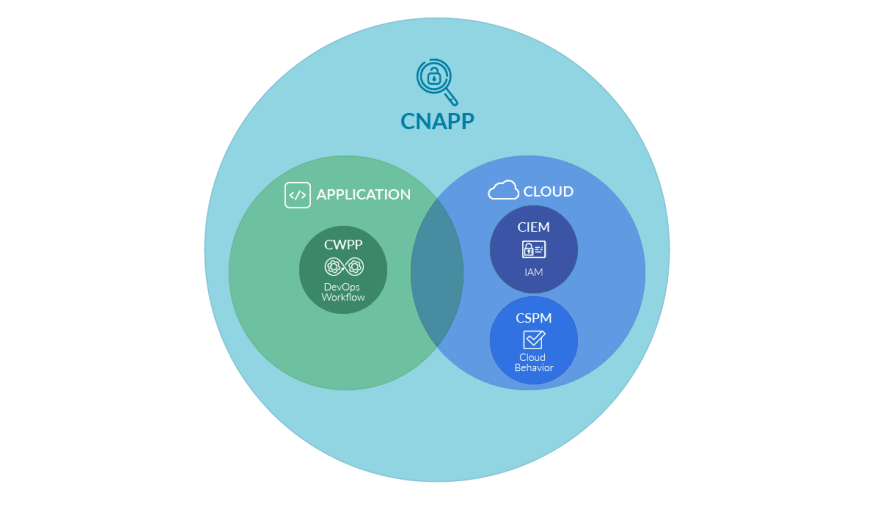 We hope CNAPP and the rest of the terms make more sense now than when you started reading the article.

True CNAPP solutions will provide interrelationships between the different insights of the use cases. It’s totally useless to have a nice UI that provides vulnerability scanning if you don’t enrich it with the cloud context of where those images are stored/running. We are not talking about isolated tools put together to call it a day.

Getting Started with Docker - Introduction for Beginners

Once suspended, sysdig will not be able to comment or publish posts until their suspension is removed.

Once unsuspended, sysdig will be able to comment and publish posts again.

Once unpublished, all posts by sysdig will become hidden and only accessible to themselves.

If sysdig is not suspended, they can still re-publish their posts from their dashboard.

Once unpublished, this post will become invisible to the public and only accessible to Miguel.

Thanks for keeping DEV Community 👩‍💻👨‍💻 safe. Here is what you can do to flag sysdig:

Unflagging sysdig will restore default visibility to their posts.