Syncfusion is glad to announce that command-line scaffolding support for Syncfusion Blazor and ASP.NET Core components is available with our 2020 Volume 2 release.

In this blog, we will explain how to use command-line scaffolding in Blazor and ASP.NET Core applications with the Syncfusion DataGrid control as an example.

What is command-line scaffolding?

Scaffolding is a code-generation framework for ASP.NET applications that creates a controller and views from existing models in the application.

Command-line scaffolding is similar, but it generates controller and view files through a command line without using Visual Studio. With it, a developer can reduce the amount of time needed to create the controller and views in their applications.

Syncfusion provides command-line scaffolding support for some of its Blazor and ASP.NET Core components.

Note: In Blazor, WebAssembly apps are not supported by Syncfusion command-line scaffolding.

Install the Syncfusion.Scaffolding tool globally by using the following command.

Use the following update command if you have already installed Syncfusion.Scaffolding to use the latest version.

Step 3: Install the following NuGet packages in your application:

Step 7: The Model ** and **DbContext classes will be created in your application. Next, build the project.

How to use Syncfusion command-line scaffolding

After installing the Syncfusion.Scaffolding tool, we can invoke the syncfusion_scaffold command to generate the controller and view files through the command line by passing arguments. For example: 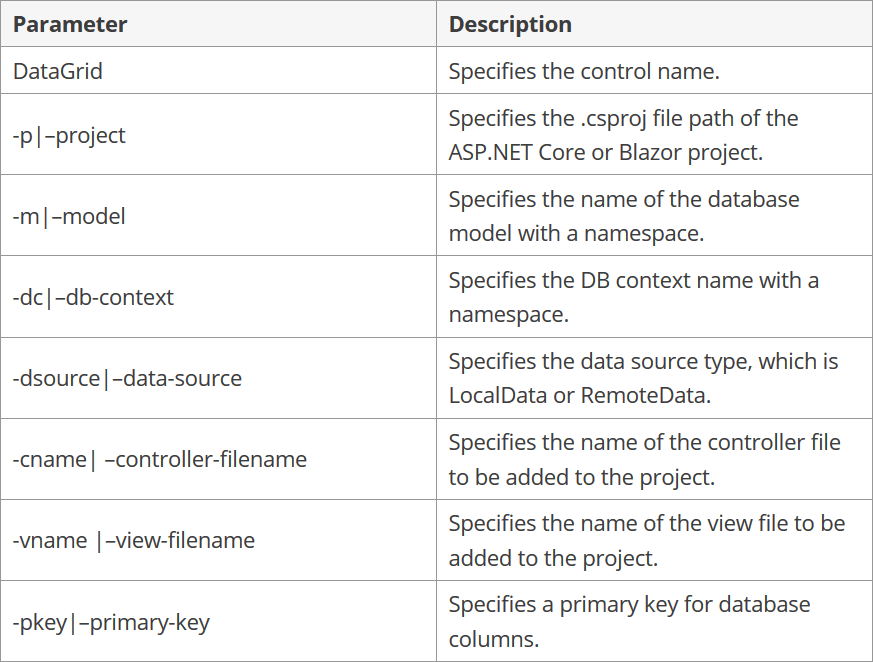 After running the above command, we should see command-line output like the following screenshot during scaffold generation.

In the ASP.NET Core project , controller and view files will be added as shown in the following screenshot.

For the Blazor project, controller and Razor files will be added as shown in the following screenshot.

Then, add navigation to the created view file based on your requirements to open the view in the web page. ** **

Syncfusion provides 70+ high-performance, lightweight, modular, and responsive UI controls for ASP.NET Core and Blazor platforms, such as DataGrid, Charts, and Scheduler. You can use these controls to speed up your application development.

Which control do you want scaffolding support for next? Let us know in the comment section below. You can also contact us through our support forum, Direct-Trac, or feedback portal. We will implement features based on the number of customers requesting them.

How to use Docker in your Node and React Applications

TypeScript Utility Types: The 6 Most Useful

Once suspended, syncfusion will not be able to comment or publish posts until their suspension is removed.

Once unsuspended, syncfusion will be able to comment and publish posts again.

Once unpublished, all posts by syncfusion will become hidden and only accessible to themselves.

If syncfusion is not suspended, they can still re-publish their posts from their dashboard.