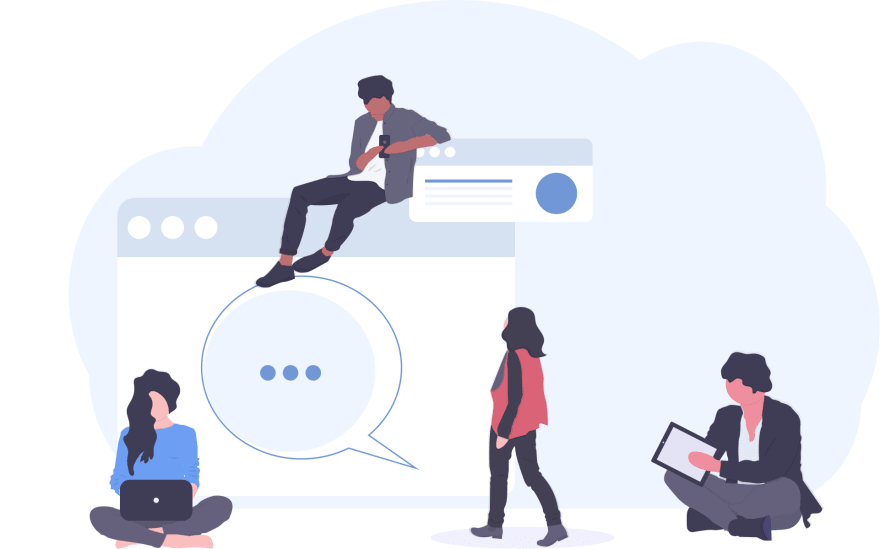 It’s 2019 and most of us talk about team collaboration when we should be talking more about cross functional collaboration.

Think about it for a minute… Every time you sit down with your team to build a new feature, members from different functions come together, right?

The product manager shares a prioritized set of user stories, the designer prepares the mock-up and passes it to your front end developer, while the back end developer sets the foundation. And we haven’t even factored in QA yet!

Without cross functional collaboration, your frontend developer will never know if the design is complete, the development team will remain unaware of the bugs reported by the QA team, and your feature will never deploy on time.

In a time when customers expect quality, bug-free features and wouldn’t hesitate a second to lament on social media, it is important now more than ever that we give cross functional collaboration the importance it deserves.

Contents of this guide

Brushing up on the basics: What is cross functional collaboration?

When people from different functions - development, design, QA, etc. - come together to work towards a common goal, it is known as cross functional collaboration.

It is kind of like building your own Avengers team, each member bringing in their own superpower to defeat the villain.

Growing companies will change processes, hire consultants to guide them, and even re-organize their org structure to get their teammates to collaborate across functions.

It is reported that 75% of the cross functional teams work inefficiently. Today’s tools were supposed to end the cycle on productivity. But that hasn’t happened.

Why is it so hard?

If you’ve ever tried to get your team to collaborate across functions, you would’ve got resistance due to fear of:

When teams lose these three aspects, fundamental questions such as what am I responsible for, how much resource can I get, and how will I be judged on my work start to creep in.

This leads to teams having competing set of beliefs and assumptions that they hold about how something is supposed to work and lead to misalignment, varied interpretations of the same message, and mixed results.

Today, each team has its own workflow that has usually gone through a series of corrections so everyone in the team can collaborate and do their best work.

When you remove members from within their team and ask them to collaborate with other teams, all of whom have their own way of working, people aren’t very sure any more.

Researcher Lisa B. Kwan suggests that when you ask team members to collaborate across functions, you are basically expecting them to give up their autonomy, their responsibility, and authority, making them defensive and liable to self-silo. Their primary concern at this point is to guard their territory and minimize the threat.

The solution to improve cross functional collaboration boils down to asking a key question: For members across functions, each with their workflow, priorities, and responsibilities, how do I reinforce identity, give them a sense of purpose, and autonomy?

How to improve cross functional collaboration?

1. Set and communicate a clear goal

Most of us would like to think we set clear goals for what the feature we’re building should accomplish and share it with our team. But when things change rapidly, it is nearly impossible to stay focused.

Ronald Coase, in his paper, titled “The Nature of the Firm” said, a workplace where everyone is obsessed all the time with the exact parameters of their job rather than being willing to pitch in and solve problems is going to be a dysfunctional one.

How can team members solve problems if they aren’t even aware of what the goal is?

Out of 3197 people who were surveyed and asked if they did not know something about the company they thought they should, 55% of the respondents said yes.

If you have perfect people and they are perfectly misaligned, the result is zero progress. 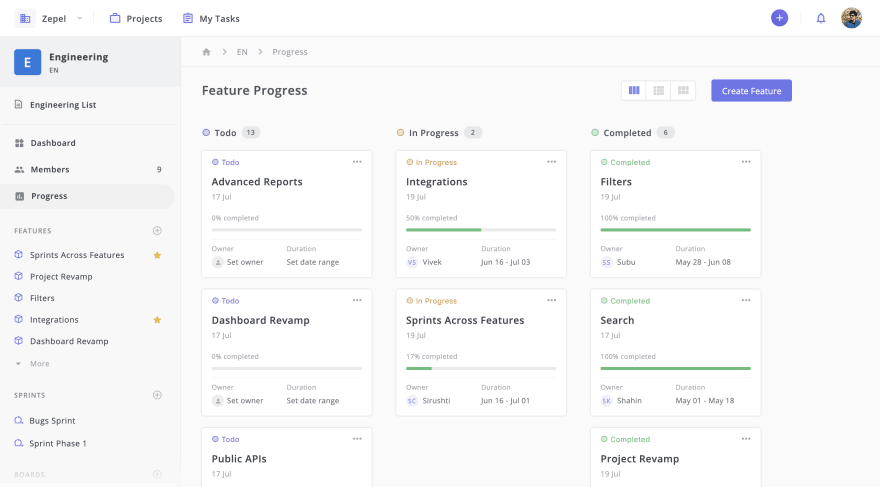 If you’re using Zepel, you can keep everyone aligned on the objective of shipping features on time by using Progress. Progress distils all the updates your team members made across functions and gives you meaningful information on how far away you are from shipping your new feature.

Because when everyone on your team is focussed on one objective - to ship your feature on time - it will no longer look like every member of your team is talking in different languages.

One of the biggest mistakes that teams end up doing while building a cross functional team is simply roping in members from different functions. Sure, you need that. But if you really want to maximize your output, you should be bringing in members with different skills and experiences as well.

Be sure to diversify your team based on:

4. Give every function the autonomy

The arc of collaboration is long and bends in the direction of functional workflows. When different members from different functions come together, there is always a mismatch in the workflow that causes teams to be misaligned and ultimately delay the feature launch.

The biggest enemy of productivity is having to adjust to a workflow that isn’t tailor-made for you. This leaves you with having to walk to your teammate’s desk and let them know they can pick up the task as the only reliable method to handoff work. 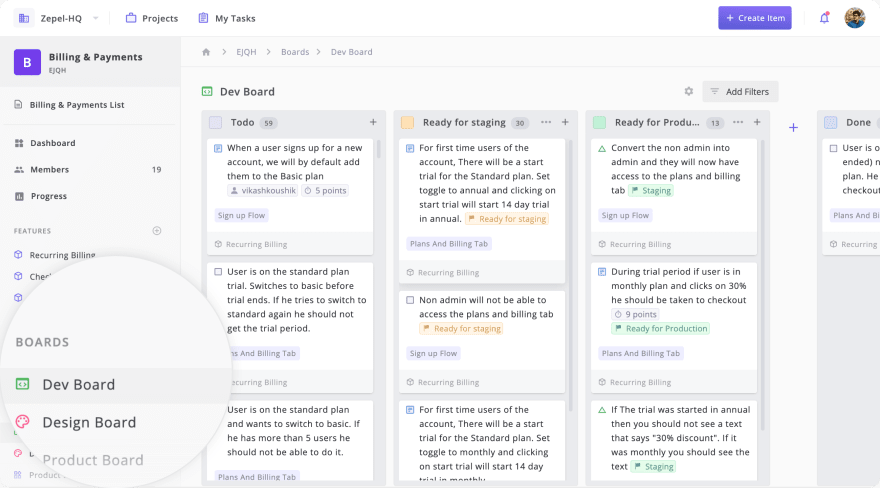 Create a Board for each discipline involved in your feature and give every team the autonomy and the freedom to work just the way they want. That way, everyone is productive and can handoff tasks by simply changing the status.

What are the benefits of cross functional collaboration?

1. Consistent Focus on the Customer Experience

Most startups and small businesses end up collaborating by simply walking to their team member’s desk and handing off information. But when the organization grows and more team members join, things go south and spiral into chaos.

Today, building a fully-functional or bug-free feature at just about every deploy is not a choice that organizations have anymore. Shipping exceptional features that are both functional and provides a good user experience is steadily becoming the new status quo.

When you bring members from different disciplines to collaborate, you get the benefit of pooling different perspectives and ideas into your feature and build a top-quality feature.

The difference between shipping a feature and bug-free feature on time isn’t trivial. And to do that as you scale while maintaining the quality and the standards is a tremendous feat. The processes and tools that made sense as a small business no longer make sense at scale.

The benefit of having the right team members with the necessary skills to prototype rapidly and deliver minimum viable versions of the feature helps cross functional teams to move quickly and therefore stay innovative.

Very few businesses have been able to get their teams to be perfectly aligned with their business goals and customers as the organization scales. But that is not to say it is unattainable.

One of the many reasons why smaller companies can often beat a bigger company in its own game is how aligned they are in achieving the goal. When members are informed with the wider context of other teams’ priorities and issues, decisions taken are inclusive and help them stay aligned.

Cross functional collaboration isn’t just about bringing members from different disciplines together and assigning tasks to them. Or having meetings to sync up.

It’s about handing-off work seamlessly, enabling everyone to work just the way they want while staying productive and having everyone aligned on the bigger picture.

When done right, cross-functional collaboration can be the difference between scaling your organization rapidly, and having to run multiple meetings while feeling unproductive.

The Feature Snowball Method Might be Good For You

The Dollhouse and The Dresser: A Lesson in Project Management