Today I'll try to compare two different programming languages, F# and TypeScript.
Both of them are multiplatform, high-level, and statically-typed so we're able to use them to write any kind of type-safe application like web-servers, native-apps, web-applications or we can use them for daily scripting on your favourite operating system.

I would like to focus on a few concepts of programming languages that we are going to compare. Those categories are:

F# is a strongly-typed language that implements an algorithm called Hindley–Milner. That algorithm analyzes your codebase and infers as much static types as possible.

If we want to write a function to sum two numbers in TypeScript, we have to define the data types for both arguments, and the TypeScript compiler will infer the Return type

On the other hand, F# analyses the source code and finds that the + operator can be called on two integers so it infers the data types of the arguments.

F# is running on .net ecosystem so it makes a difference between float and int while TypeScript does not

As you can see, F# code looks like another scripting language without static types but because of the terrific F# compiler it's a type-safe and strongly typed snippet.

Thanks to the Hindley-Milner algorithm in the F# compiler, F# is the winner.
Unfortunatelly it looks like TypeScript has no plan to implement this kind of type inference.

TypeScript use angle brackets <T> for generics. This is very similar to languages like C++, Java or C#. F# use just simple apostrophe 'T for it.

In TypeScript, we're able to infer simple return values and variable declarations, but if you want to have dynamic arguments like in this example:

you have to define that the argument anything is of some generic type T and the function takes the type of anything and returns a tuple of [anything, anything]

As you may suggest, F# is so smart that it can even infer generic types of our function.

Again, F# analyzes the source code and finds that if a function takes anything of type 'a, it returns a tuple of anything, anything of type 'a * 'a. F# compiler infers that argument is of Generic type 'a. This code looks like a dynamic scripting language similar to Python but it has a powerful 100% type-safe runtime. 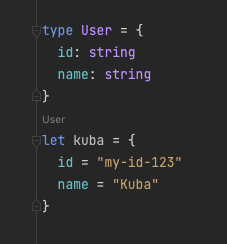 As you can see, F# has structurally based data object types. It means that F# compiler finds that there exists an object type with attributes id: string and name: string and it automatically infers its data type.

In TypeScript, if we create a data type, we have to assign that data type to a variable.

It's verbose so we have an alternative in TypeScript and we can infer the data type directly from the data by using the typeof keyword. 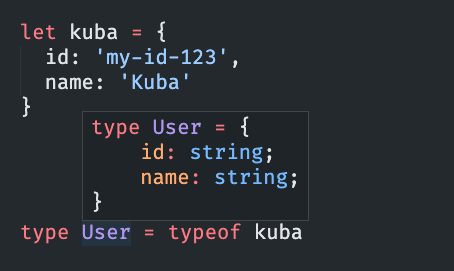 Thanks to the TypeScript approach, we may use more advanced generics like Omit<...>, Pick<...>, keyof and so on.

In JavaScript we have a few nullable values: null, undefined, 0, NaN, "". This makes it difficult to handle the JavaScript runtime properly. Thanks to TypeScript we can check the types more strictly.

F# decided not to implement those nullable values and focused on forcing you to handle edge-cases strictly. So in the F# core there is a defined union type called Option
It's defined as:

Thanks to that, F# compiler forces us to handle all non-valid potential null pointer exception errors, which is good. But in TypeScript, we have the same result if we type 100% of our codebase correctly. So in this category it is a draw and there is no winner.

Pattern matching is a really powerful part of F# language design. There are many sources where you can find more information, like there or there.

TLDR:
Pattern matching in JavaScript/TypeScript is bad, not flexible, and bad again. So there the F# is the winner.

I put here one of many examples of the powerfulness of pattern-matching in F#.

F# has linear module system with namespaces and modules.

TypeScript has a few module systems like commonjs, ES6, and so on. Today we're gonna talk about ES6 imports.

To be honest, I don't like namespaces in programming languages like C#, Java, PHP, and so on. I prefer a module system where each file is its namespace and import & export are the only sign if the value is local, or if the value can be imported into a different module.

ES6 modules enable us to have cyclic dependencies where names of files are part of our application architecture. In a language like C# and F# we have to create a file plus add a module or namespace declaration. I prefer a more minimalistic way of defining modules so I prefer the ES6 way.

Both languages have really strong type inference systems. This means that the compiler will check the code and suggest (infer) the best static type to use. Thanks to that, you are able not to define static-type in the code on your own. It helps you to make a better development experience with less writing, but more readable, self-documented, and less error-prone code.

TypeScript is a highly dynamic language so if we compile our TypeScript code into the vanilla JavaScript, it removes static types and we're not able to use those metadata to optimize JavaScript runtime like memory allocation and CPU time.

On the other hand, thanks to the fact that TypeScript is a tool for a better developer experience, we're able to use expressions like as any, : any, @ts-expect-error, @ts-ignore and not to be too strict.

It means that both approaches have pros and cons, so there is no winner.

8. Not owned by mega-corporate

Maybe this point could be stupid for you but I believe that it's better to write code in a language that is not so directly connected to anyone and there is more democracy.

So, Let's check the results of categories:

So as you you can see, it's hard to decide which language I like more.
In conclusion, my dream language will be F# with Javascript ES6 module system and object data inferring via typeof.

Is there a solution?

So at the end of this article, it is worth mentioning that there is an awesome compiler fable.io that brings F# to the JavaScript ecosystem.

On the next screenshot you can see demo example where fable.io transpile one of our example from F# into the JavaScript.

How to scrape Google Maps Reviews?

Once suspended, svehla will not be able to comment or publish posts until their suspension is removed.

Once unsuspended, svehla will be able to comment and publish posts again.

Once unpublished, all posts by svehla will become hidden and only accessible to themselves.

If svehla is not suspended, they can still re-publish their posts from their dashboard.

Once unpublished, this post will become invisible to the public and only accessible to Jakub Švehla.

Thanks for keeping DEV Community safe. Here is what you can do to flag svehla:

Unflagging svehla will restore default visibility to their posts.