I delivered my first public speech a couple of days ago. I talked about stormkit.io, a tool which I created to ease the life of frontend developers. This article is on the experiences I've made during that talk.

A bit of context

First, let me tell you that if there are more than 3 people listening to me, I get nervous. I might be a social guy, but being the centre of the attention is not my thing. The first time I was in such situation was during my wedding. I have Turkish origins and in Turkey we have big celebrations. I mean, really BIG. Ours was still considered as a moderate one, with around 350 people. Now put yourself in my shoes. You're in front of a crowd. You're not a great dancer and you have to dance while all eyes are staring at you. This is still OK, but not when the DJ plays a different version of the song which you got prepared for the last few weeks. Thanks God, my beautiful wife is gifted when it comes to dancing, so she saved the day :) At the end all went perfect and we had a great time.

Now, let's get back to our topic. As usual, I was nervous before the talk. However, thanks to the steps I will mention below, I managed to cool down and give a better speech.

This goes without saying but there are a few tricks which helped me to practice even better.

1a. Do not memorise your speech

Don't try to do this. You will fail. There are too many variables that are not under your control while giving the speech. If one of these changes, you'll miserable go wrong. Instead try defining headlines and practice around them. Do a couple of rounds, maybe even more, until you feel confident with what you have to say.

1b. Never read in front of a public

It's boring for the audience. Try point 1a instead.

1c. Practice in front of a mirror

Initially I was practicing in the living room walking around. After a while, I felt pretty confident and I wanted to see how I behave while I give a talk. I went in front of a mirror and started to talk. I failed miserably. This might sound weird but I was glancing away and I felt really shy. It was hard to look at myself and speak at the same time. I had to practice way more to get confident. But that's the thing. You'll have to look into the eyes of your audience as you speak to see how they behave. Are they following you or are they checking their mobile phones? If you feel like they're not following you anymore, you have to find ways to bring the attention back. The easiest way to do this, is by controlling your volume. Try speaking with resonance. Sometimes louder, sometimes softer. It takes a lot of practice to be good at this.

2. The Ballmer Peak is real

Have you ever heard of the Ballmer Peak? If not, check here. Looks funny, but that's real. A couple of beers will help you to concentrate and boost your self-confidence. At least, that's what happened to me. I was way more relaxed after the beers. Just be careful and know your limits, and make sure you go to pee before the speech :) 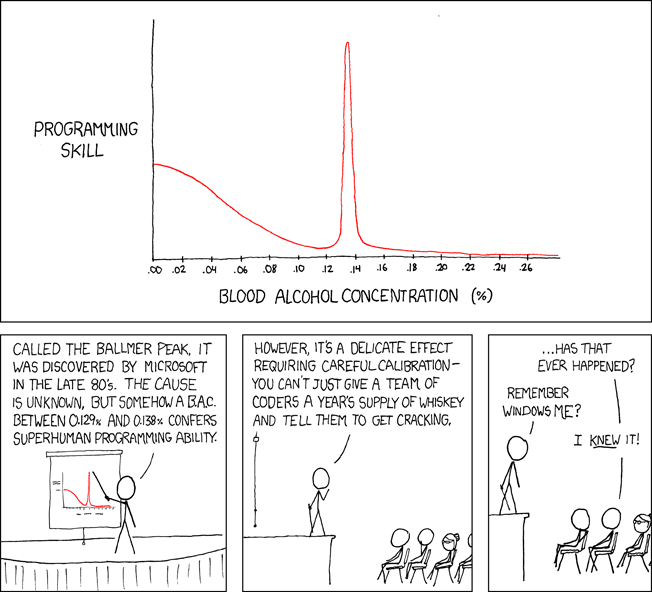 3. Oooom, breathe in, breathe out

I know how it feels like when you stop for a second to think what you're going to say next. It feels like forever, right? But for the audience this is the perfect moment for chilling and thinking about what you're saying. And for you, it helps you to calm down, think a bit, and regain your breath. While practicing, make sure to follow your breath as well. You don't want to seem breathless after giving a speech for a minute. It doesn't look good. So try giving breaks, breathe in and breathe out.

4. Be there half an hour before

This also, goes without saying but it helps you to get used to the place. Maybe you can even chat with the early-birds which will help you to familiarise with the audience.

5. Be confident, everything will be alright

Even if you don't deliver a high quality speech, the audience will understand you. It's hard to be in front of the people. It takes courage. People know this, and most of the time they won't be aggressive even when they're bored. Worst thing that can happen is that you see a bunch of people looking at their mobile phones while you're giving a speech. This is OK. You can only learn by practicing. If you notice something like this, just try to iterate over your speech and find the bottlenecks and improve them. It will be alright :)

These are my learnings from the first public speech I gave a couple of days ago. I hope you'll find something meaningful for you which will help you calm down, if you're nervous like me!

What stood out to you from the Mayfield + DEV Discussion Series?

📢 IT'S HAPPENING! Aviyel is Now LIVE on product hunt!

Savas Vedova
I am a fullstack developer specialized in frontend technologies like reactjs. I also love programmimg in go. Currently im working on https://stormkit.io to make developers lives easier.
June 23rd, 2022: What did you learn this week?
#weeklyretro #weeklylearn #discuss
What was your win this week?
#discuss #weeklyretro
If you weren't a software developer, then what?
#devjournal #programming #beginners #discuss