This article walks through my process of adding some animation to a project. I go through what animations I want to add and why, a bit about how I decide which animation library to use, how I use timelines to make some shapes fall, and how I dealt with an issue of a CSS animation clashing with the JavaScript library's animations.

I made a Glitch app that lists out the GitHub repositories you've published to GitHub pages. You can check it out at curious-octocat.glitch.me.

Even though there isn't much to distract you on the page, I wanted to add some animation to clearly direct attention to the input box then to the space below it where the results would appear. I think the latter needed the help more - since the results could possibly load completely unseen below the fold. For continuity's sake though, I wanted a similar animation to point to the input box, so visitor's would be familiar with the animation and what it meant.

Here's the original design I planned out. 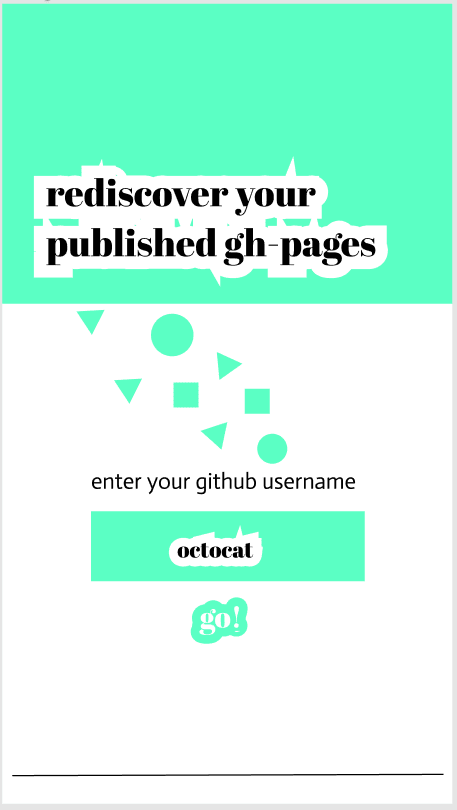 At first I thought about using p5.js. My idea was to absolute position a canvas behind the input, then animate some shapes around it as planned. That's about as far as I got when I thought of another route. As I was trying to figure out how to control when the animations would play with p5, I remembered another animation library that I'd tried before: anime.js.

When I revisited their documentation, I realized their examples were pretty much exactly what I wanted to do, plus they also had clear examples of pausing and playing a timeline of animations. So although I'm pretty sure you can do all the things I wanted to with p5.js, I decided to use anime.js instead.

Here's how you make a timeline with anime.js:

I have mine inside a class Shapes, which is why I'm attaching it to this. You could just as easily save it to a variable: const timeline = anime.timeline();. Each timeline is set to not play automatically (autoplay: false), so I can play it when it's time to. The duration given (duration: 600) isn't the total duration for the entire timeline, but rather the default duration for each of the animations added to the timeline.

To add an animation to a timeline, you use its add() method and pass it an object with the changes and properties for that animation:

The properties that I used were:

And here's the same timeline in action:

After playing with different X and Y coordinates for all the shapes, I finished the rest of the timelines with similar code.

When I started working on the goal of making certain shapes spin, I decided to use a plain ol' CSS animation. Totally doable with anime.js, but since it was a simple animation and I didn't need to control when it started or stopped, I figured using CSS keyframes would be a fine way to go.

I decided to make all the triangles spin. Here's the code I wrote:

And here's what happened when I refreshed the page:

My triangles disappeared! When I inspected the DOM, I saw they were chilling in their starting places, spinning away.

I half-thought through a possible solution involving adding the translateX and translateY values to the keyframe animation by getting a triangle's ending position and updating the CSS using CSS variables and maybe animation fill-modes or something, but eventually I thought of a simpler idea: apply the different animations to different elements. Basically, nest a spinning triangle inside a moving div.

These are the original elements I had for the shapes:

And here are the shapes as nested divs:

I didn't even have to change the CSS or the JavaScript. The anime.js animations were already targeting elements using the number classes, and the shapes were created with the shape and shape name classes.

When I refreshed the page, it worked out perfectly!

☑️ Have some of the shapes constantly spinning

Nesting the shapes inside the moving divs also made my last goal easy to meet, since I wanted to use the transform property yet again. When a shape is hovered over, it grows just a tiny bit.

Here's the code for that:

I should note that the triangles aren't affected, even though they also have a shape class. I think it's the same issue as before: the constantly running CSS keyframe animation is using the transform property, so it can't be bothered by other attempts to set it.

☑️ Do some small animation when a shape is hovered over

And finally, here's a gif of most of the animations all together: the shapes falling from the header, falling into the input box, falling from it, and the spinning triangles.

I'd love to hear about what you're working on animating, or if you have any feedback or other solutions for the problem I ran into.

How I Integrate Svelte With Gsap 3