Nowadays, we have code everywhere. We need to patch bugs, find how and why a bug was introduced to fix it, find when a functionality was added and by who, thus we need what is called "version control".

Version control is a bunch of things to solve the problem stated above:

And git is a tool to do all those things! Awesome, isn't it?

commit: we can see it as a list of changes made to a project ; for example a line in this index would be: file which had been modified, lines of the file changed, new content for each line

branch: a collection of commits, ordered by their date of birth

merging: when we take two branches, thus two collections of commits, and we put it in a single branch: we are merging changes made on a branch A with the changes made on branch B

forking: starting from an existing repository hosted on the internet, we copy it to our account, to change it without affecting the original repository

pull request: after having created your own branch or after having forked a repository, you made some changes to the project, and ask the maintainer to merge your changes with their changes

How do I use git?

Nota bene: this post will only cover the basic usage of git through the command line

Initializing a repository on your computer

First thing we want to do is to create a repository on your computer to register your changes to your project through commits.

We can do that using the command git init in a terminal, it will create a .git folder which you won't have to touch, git will do everything (storing commits, branches names and much more) in this folder. Thus we don't want to delete this folder!

Next thing is to add a .gitignore file to your project: it will list all the files that shouldn't be committed (such as build outputs, private keys...).

Example of a .gitignore:

To create a commit, we need to add files to it, since a commit is collection of changes made to file, it needs to know which files to look at.

to add specific files, or

to add all the files in the current directory and sub-directories.

Then we create a commit with those files with

The -m is for message.

Checking which files were updated since last commit

To show a shorter output, we can use the -s option (stands for short) along with -b (show branch information), like so:

To list commits with their message and date, we use

Commits are listed from the most recent to the oldest one.

A shorter version without the dates is available by using

to quickly see a list of changes made to a project (here we can see the importance of making good commit messages, to sum up the changes made). Example output:

Another one to show a pretty graph with branches (thanks Drarig29): 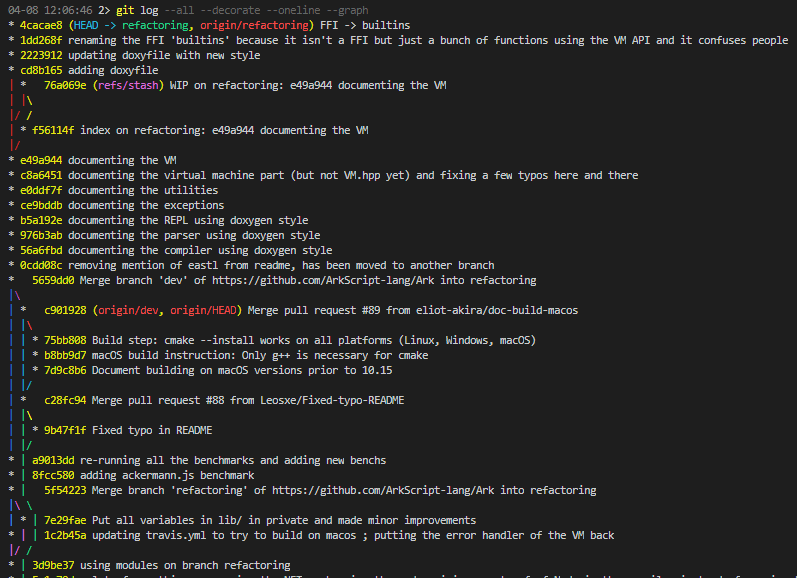 Pushing your local repository to a remote one

Once we have made a few commits, we would like to host them on a repository, such as on GitHub or GitLab. You will need to have an account on one of those website, and create a repository on your account. 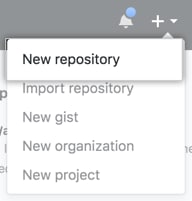 Once this is done, we need to add a remote to our local git repository, to tell git that we have a remote location where we want to push our code. On GitHub, an HTTP remote looks like this https://github.com//.git. We can add it to git by using

By doing so, we add a remote named origin to our local git repository. Then we have to tell git that we want to push our current branch (the default one, named master by default) on this remote:

The -u stands for set upstream, we are pushing our commits to the remote origin, and registering origin as the upstream for our branch master.

Creating a new version of a project

Don't start over! You can easily reuse your existing code by creating a branch.

If you remember correctly, a branch is just a collection of commits, thus a version of a repository since we can recreate a repository by reading all the commits.

This means that we can create a new version of a project by creating a new branch, like so:

The branch name can not have any whitespace in it. This command will create the new branch (the -b stands for create a new branch), and automatically move you to this branch. If you want to go back to another branch to retrieve code, you can do:

An issue is a discussion thread about a problem/idea/question an user has with your code.

Forking a repository results in copying the repository to your account, to modify it on your own.

Merging is the action of taking two versions of a repository, comparing the changes listed in each commit and checking if it is possible to unite the commits history (understand: their isn't collision in commit history). It's often the result of a pull request when it's accepted.

Hopefully this article has helped you understanding git, feel free to comment if you need clarification!