Have you ever wondered how Java or Python work? What is a "virtual machine"? If those questions stir your interest, you've come to the right place!

If everything goes according to the plan, this will be part of a serie of articles on understanding and making bytecode interpreters (we will even see a bit of how you could compile a language to a bytecode).

Why should I care about VMs?

You can get performances nearly equal to native programs ones, compared to tree-walk interpreters which have to hop from a node to another, oftentimes not contiguous ones, leading to really poor performances.

A virtual machine (or bytecode interpreter) works on a linear instruction's flow. A "program" being linear gives us way better performances compared to non-linear one, because we don't have to fetch data 5KiB after the current one, then 2MiB before... the CPU cache will love it, as it will be more predictible.

Also, with such type of programs, we have only two things we can do:

Nota bene: instructions take a fixed number of arguments, so that when we read an instruction like PUSH we know how much we should continue to read from the program before moving onto the next instruction.

To make that even smaller, we could write P5 P4 E PJIT15. We are still wasting space, and fetching an arbitrary length instruction (how do we know we need to read a single char like P or PJIT?) isn't efficient. We could write bytes, with a byte per instruction.

Now you may wonder how EQ works, and why we have PUSH and POP_... instructions. For this short example I assumed we were using a stack based virtual machine. Basically, we have a LIFO stack (last in, first out) on which we put values, and instructions can use this stack to retrieve values (pop them off), do stuff with them, and push back (or not) a result to the stack.

As specified before, it is a special finite space on which we put our values to operate on them later, for example:

To operate on this stack with more freedom, we can introduce special instructions such as DUP to duplicate the top of the stack value, and ROT to rotate the two values on top of the stack. 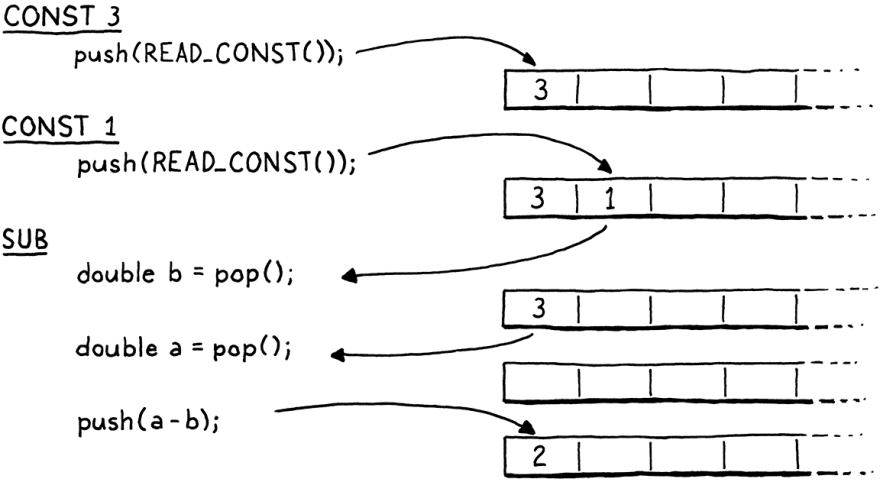 Every CPU has a finite set of registers, and since our VM is inspired from the architecture of computers, could we (or should we) have registers in our implementation? What would be the benefits?

A stack based VM will need to pop and push very often to its stack in the context of recursive functions, while a register based one can be more easily optimized using a JIT (just in time) compiler, because our computers are register based, making the transformation quite "straightforward".

For a more in-depth analysis, go check this stackoverflow thread.

From language to bytecode

Let's take this small snippet from an imaginary language:

If we break this down, we have:

In term of instructions, we could go with this:

A lot is going on here:

A small problem arise with print: it's a builtin symbol, thus having it at a random symbol id isn't practical. A solution could be to have it with always the same identifier, and all the other user-defined symbols would start after. Now our symbol table will be like that:

Notice that print isn't listed in it anymore! Our VM will have to know that every symbol identifier greater or equal to 1 is user-defined, and the ones before are builtins' ones.

As for the context tracking for functions' calls, we will see that in the next article. ;)

How to setup CouchDb on Azure: A step by step guide

How to set host-only adapter on VM (Virtual box)

Getting started with SSH Key-based Authentication For Servers

Once suspended, superfola will not be able to comment or publish posts until their suspension is removed.

Once unsuspended, superfola will be able to comment and publish posts again.

Once unpublished, all posts by superfola will become hidden and only accessible to themselves.

If superfola is not suspended, they can still re-publish their posts from their dashboard.