If you have ever worked on a large scale project, you know that finding and tracking bugs can be very tedious and lengthy.

Did you know it could be automated? There are multiple ways to achieve this, starting with unit & integration tests run regularly to detect regressions, end-to-end tests to ensure a functionality is behaving as intended, and much more.

However, writing those tests is also a lengthy process, and you miss some hard to find bugs. We are going to focus on fuzzing, an automated crash detection process.

According to wikipedia, fuzzing is an automated software testing technique that involves providing invalid, unexpected, or random data as inputs to a computer program (https://en.wikipedia.org/wiki/Fuzzing).

Given a set of inputs your program can work on, a fuzzer will generate as much diverging data as possible and feed it to your program, recording each crash.

If you don't know me yet, I am the developper of ArkScript, an easy to embed scripting language, and I have worked on dozen of new functionalities this past year. However, this can (and it has) introduce bugs, sometimes quite tricky to find.

Fuzzing comes to the rescue here! I didn't want (nor had time) to write thousands of tests by hand, so I just wrote the basic tests, checking that every good input leads to the expected output. What was missing was the "bad input leads to bad output" kind of tests.

AFL++ is a superior fork of AFL (American Fuzzy Lop), a fuzzer originally developed by Google.

Here is how it operates:

It is very easy to use, you have to recompile your project using afl-cc and/or afl-c++, give it an input corpus, and let it work for you until you are satisfied.

Since I wanted to fuzz a programming language, my input corpus was easy to put together: code samples, parts of the standard library, some tests files.

The process is as follows:

You may have noticed the -- ${buildFolder}/arkscript @@ -L ./lib bit: this is the command to run the inputs against, with @@ being the filename of the input generated by AFL++.

Then we can run the fuzzer as follows, and get crashes:

The -s 0 is here to set the RNG seed to 0, to be able to reproduce RNG based crashes more easily ; every crash will be stored under fuzzing/output/.

The -m 64 sets a hard limit of 64MB of RAM for the target so that memory leaks can be more easily detected, and it will prevents potential out-of-memory problem for your computer. I tried to run with no limit, and sure enough my system crashed after 15 minutes (out of memory). I then played around with -m value, 8MB is not enough and it prevents my target to starts.

And here we are, the fuzzer is running and finding bugs for us. 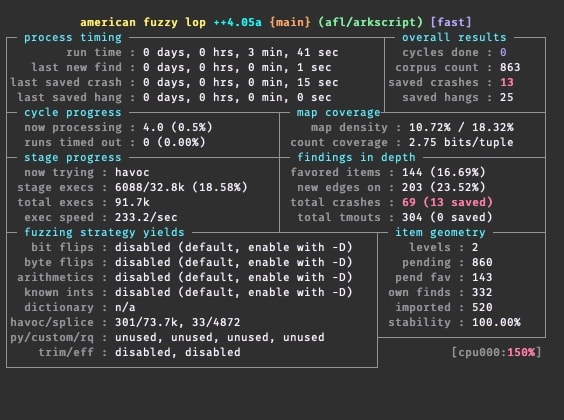 Now comes the hard part, reducing the input to find the smallest input sample which still generates the bug. Oftentimes, this has to be done by hand, and it is a tedious process, but finding those buggy inputs by hand would have taken much more time, so it's still a win!

AFL++ has tools to minimize the crashes, helping you to find the bugs:

Once you have your smallest input possible for a given crash, and you have fixed it, it is a good idea to keep it somewhere to be able to run the next version(s) of your program on it and see if it is still fixed. This has personally helped me starting a collection of bad inputs, to check in my tests if they are correctly handled.

Some things to note about fuzzing:

Because fuzzing can require a lot of time and ressources, you might want to run those tests once in a while, for example for every new release instead of for every commit or test added.

Once suspended, superfola will not be able to comment or publish posts until their suspension is removed.

Once unsuspended, superfola will be able to comment and publish posts again.

Once unpublished, all posts by superfola will become hidden and only accessible to themselves.

If superfola is not suspended, they can still re-publish their posts from their dashboard.

Once unpublished, this post will become invisible to the public and only accessible to Alexandre Plateau.

Thanks for keeping DEV Community 👩‍💻👨‍💻 safe. Here is what you can do to flag superfola:

Unflagging superfola will restore default visibility to their posts.