Contributing to open source projects is fun and easy.

Is it really?
For those familiar with GitHub and Open Source Contributions skip this paragraph and for those not familiar with either of them I’ll summarize it for you. GitHub is a big centralized platform where anyone can host their code/project for free and it uses Git for version control. It means an open source project is accessible to everyone and you can use the software according to your own needs. Now every project isn’t perfect in any way so developers from around the world try to fix any issues, create pull requests to commit their changes or add some of their own features to the project and this is how the project grows which eventually also helps the developer to showcase her/his contribution towards an open source project. Now that we have got that out of the way let’s focus on the issue at hand.

Recently I came across an initiative known as “Hacktoberfest” .

Hacktoberfest is a monthlong celebration of open source software run by DigitalOcean.

Honestly, it is a great initiative in my opinion because it encourages more contributions, more developer engagement and in turn a rapid growth of countless open source projects. Why is it any different from a weekly/monthly code marathon you ask?

To win a shirt, you must sign up on the Hacktoberfest site and make four pull requests on GitHub by October 31st. Pull requests do not have to be merged and accepted. As long as they’ve been opened and marked as ready-for-review between the beginning of October 1 and the very end of October 31, they count toward a free T-shirt.

So when it started on 1st October, 2020 some “contributors” watched how we can basically exploit this and win a free tshirt. The only problem here is that it was more of just writing docs updated or something which isn’t even relevant to the project. Teams at Hacktoberfest & GitHub had to include many measures for maintainers in order to stop this bulk spam. They’re handling this situation really well!

The screenshot above is an example of a spam pull request.

All I want to say to these spammy contributors is that contribute to a real project with your own logic and your own code! It’s not that hard. Just please don’t be so desperate for a t-shirt or for a badge. Heck it should at least make some sense.

Even tutorial code is fine but just writing something for the sake of +1 in PRs is just lame.

Informative legend for your PR contribution: 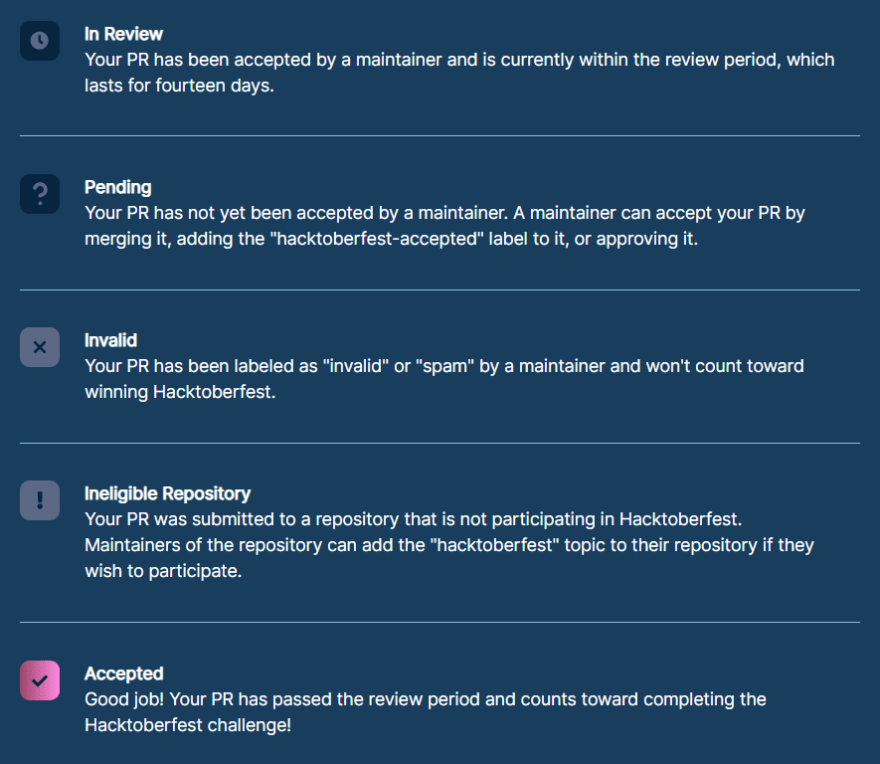 If you want a video explanation of what I have just said, Pawan Kumar has posted about it on his YT channel:

To conclude, I’d like to say that enthusiastic devs will always contribute and in a good way. I sincerely hope that we share this information enough so that those who are new to the platform add something great to the community rather than getting sidelined because of not knowing enough about how to contribute.

PS: Read the Hacktoberfest FAQs for any queries regarding open source.

How to Master The Art of Content Creation As a Developer?

How to Integrate BDD Cucumber In Cypress 10

Why is everyone building on GitHub?

Thinking Like a Hacker: Stealing Secrets with a Malicious GitHub Action

Once suspended, sunitshirke will not be able to comment or publish posts until their suspension is removed.

Once unsuspended, sunitshirke will be able to comment and publish posts again.

Once unpublished, all posts by sunitshirke will become hidden and only accessible to themselves.

If sunitshirke is not suspended, they can still re-publish their posts from their dashboard.

Once unpublished, this post will become invisible to the public and only accessible to Sunit Shirke.

Thanks for keeping DEV Community 👩‍💻👨‍💻 safe. Here is what you can do to flag sunitshirke:

Unflagging sunitshirke will restore default visibility to their posts.