If you are a newbie to programming and JavaScript, you might first find it hard to grasp the concept of functions.

When I first learned about functions, I thought I got it all right. Then, when I tried to apply it in some code challenges, I got more confused, and I had to go back and forth reading my notes to understand functions more deeply. 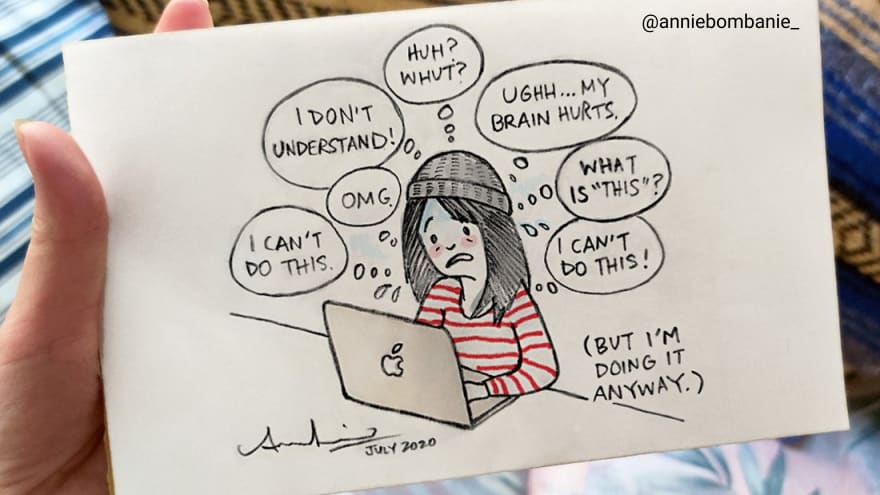 I came to the point that I doubted myself and felt like I was not up for this. But without giving up, I started digging deeper into functions and finally understood them.

So this post is for newbies like me, who are trying to understand this concept in a simple form!

Check out the Table of Content below to see what we will be going over in this post.

What is a function

A function is the fundamental building block of a JavaScript application. It is one of the most essential concepts in the language.

Let's take a simple machine. What does it do? It takes an input, processes it inside, and gives an output.

For example, think about this coffee machine below. It takes ground coffee, brews it, and makes a great cup of black coffee.

That's exactly what functions do as well! 😊

The most simple form of a function is a simple piece of code that we can repeatedly reuse in our code. What does this mean?

With function, you don't have to write that code over and over again throughout your program. Instead, once you create a function, you can reuse it whenever you want. Confused? Let's come back to it later.

So what have we done here?

So this is the simple way of writing a JavaScript function and the syntax of it! 😊

Now you might be thinking that we are writing more code with functions. That's true!

But the beauty of it is that we can use this function again and again throughout our program when we need it. So we don't have to duplicate the code. Let's look at a simple example to understand this.

Let's say you want to add ten to a number. Here's how we can do it without functions.

As you can see, we have written more code in the second example, but it would be useful to write a cleaner code when we want to add ten to more numbers. Check the below example.

I hope now you can understand how we can write something once and reuse it again with functions. Functions help us reduce, reuse, and recycle our code, which is something awesome! 💃

Now let's move on to understand few other parts of functions. Which are;

This is something I really got confused with when I was learning about functions. I couldn't remember the difference properly and was wondering why my function was not working properly 😄

Let's check the below picture. 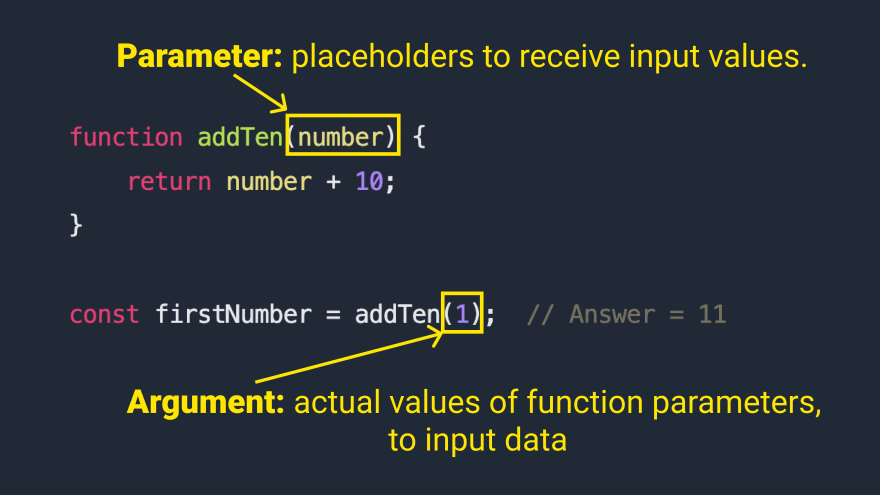 As you can see, we added the function parameter inside the parenthesis. This is the input or list of input values that need to be received to perform the function. You can think of it as an empty placeholder that needs to be replaced later on.

Arguments are actual values of function parameters for those input data. So in the above examples, the placeholder is replaced by the actual data, the number "1".

In the first function, we haven't returned a value; we have simply logged a value inside the function. And then, we called the function and got the logged value as "11".

One important thing that you have to keep in mind is that this return keyword immediately exits the function. It first returns the value that we ask it to return, in this case, the number + 20. After that, the function is DONE!

So if you want to run the console.log, you have to place it before the return keyword.

Let's say that you have written a function. So how do we use this function?

To use a function, we simply write the function name followed by a parenthesis. And this process is called "invoking", "running", or "calling" the function.

If you remember the first example, to log the name using the function we created, we used the function name followed by the parenthesis below the function that we have written (outside of the function).

Let's look at the below example to understand how to do that.

In the above example,

Now you can use this variable to call the function whenever you want! 😊

Alright! Now you have learned the basic parts of a function. So let's look at the below pictures to recap everything and understand the anatomy of a function! 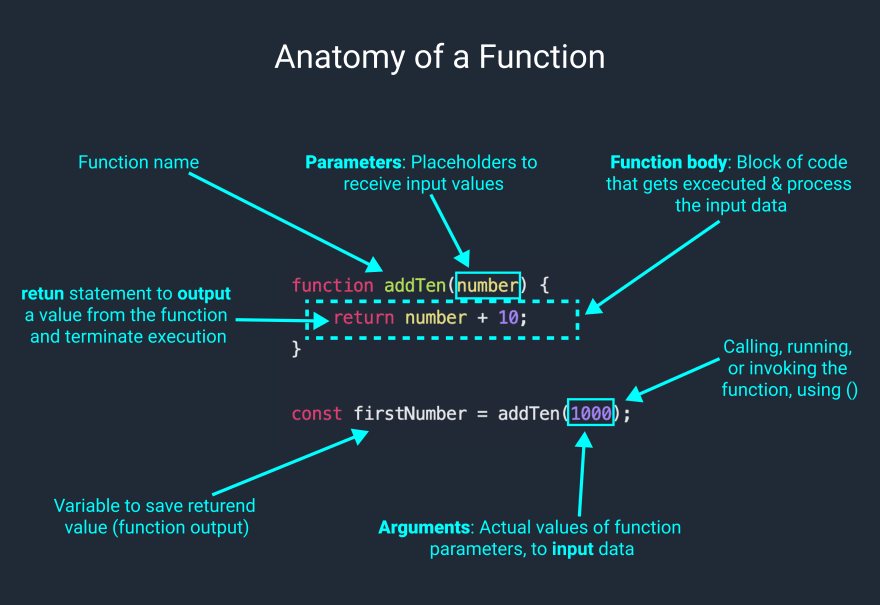 I hope now you have a basic idea of how the function works and the basic parts of Javascript functions.

There are different ways to write JavaScript functions. We will be looking at three ways of writing functions in the next few sections. These three types are:

Are you ready? Let's go!

We use the function keyword to declare a function. Same like we declare a variable 😊

So let's declare another function to calculate the age based on the birth year.

Let's see what we have done here,

So this is how we simply declare a function. I hope this is clear to you!

Now let's see how we can perform the same function with the function expression.

Yes, simple as that!

Alright! Now you might be wondering what's the big difference or big deal between function declaration and function expression.

There's one major difference between these two. And that is, we can actually call function declaration before it is defined in the code. We call this hoisting.

Function declarations are hoisted, but expressions are not!

In the code below, I've called the function before the function declaration and the function expression. So, if you run this code, cosole.log will produce an error for the 'calcAge2`. Try it out!

You can learn more about JavaScript hoisting here.

There is another way of declaring functions in modern JavaScript, and that's with the arrow function, which actually looks like an arrow: () => {}

Arrow functions are actually shorter and faster to write. Let's look at the same example that we used before and convert it to an arrow function.

Let's see what we have done here,

As you can see, this code is a lot easier and faster to write. And one of the reasons for that is that we don't need the curly braces like previously to define a code block for the function body. And another reason is that return actually happens implicitly here; it automatically returns the value without explicitly defining the return keyword.

So this is actually just the simplest form!

Now let's look at a more complex example where we have to use multiple parameters and code.

So in here, we have wrapped the parameters in parenthesis and wrapped our code in curly braces. Same as we have done in function declarations and expressions. That's the only difference that you will see between simple and complex arrow functions.

I hope that now you can understand how you can write simple and complex arrow functions.

To recap and better understand the difference between these three types of functions, refer to the below code.

So this is all about the basics of JavaScript functions. Of course, there's a lot more to functions than these basic concepts, but you can easily get through the rest when you understand these basics.

Let's give you all a big hand for reading to the end of this post and trying to understand this complex concept.

I hope this post helps you to clarify all your doubts about functions!

What is react used for? Let's know here

First Hacktoberfest and open source contributionand ,How I am start