CockroachDB is a cloud-native SQL database that features both scalability and consistency. The database is designed to withstand data center failures by deploying multiple instances of symmetric nodes in a cluster consisting of several machines, disks, and data centers. Kubernetes’ built-in capabilities to scale and survive node failures make it well suited to orchestrate CockroachDB’s databases. This is particularly for the reason that Kubernetes simplifies cluster management and helps maintain high-availability by replicating data across independent nodes.

This guide focuses on how OpenEBS LocalPV devices can be used to persist storage for Kubernetes-Hosted CockroachDB clusters.

Ever growing demands for resilience, performance, scalability and ease of use have led to an explosion of choices for developers and data scientists in search of an open source database to address their needs. Databases are often characterized as either SQL databases, noted for their consistency guarantees with PostgreSQL and MariaDB considered to be ACID compliant (Atomic, Consistent, Isolated, Durable), or NoSQL databases which have been noted for their scalability and flexibility however not considered to be either ACID compliant or completely compatible with SQL. More recently Distributed, Scaled-out Databases were introduced that promise to avoid the trade-offs between SQL and NoSQL databases, allowing for the scalability of NoSQL DBs along with the ACID (Atomic, Consistent, Isolated, Durable) transactions, strong consistency, and relational schemas of SQL DBs.

CockroachDB is a distributed database that is built on top of RocksDB as its transactional and key-value store. Cockroach DB supports both ACID transactions and vertical & horizontal scalability. With extensive geographical distribution, CockroachDB can maintain availability with controlled latency in case of disk, machine or even a data center failure.

CockroachDB is deployed in clusters consisting of multiple nodes. Each node is divided into five layers:

Although CockroachDB can run on Mac, Linux, and Windows OS, production instances of CockroachDB are typically run on Linux Virtual machines or containers. The database can be orchestrated either on cloud or on-premises setup. For running stateful applications, orchestration tools like Kubernetes are considered perfect.

To understand how CockroachDB is orchestrated on Kubernetes, here are some Kubernetes terminology applicable to storage and stateful applications:

A Persistent Volume is a block-storage-based file system that is bound to a POD. A volume’s lifecycle is not tied to the POD to which it is attached, and every CockroachDB node can attach to the same persistent volume every time it restarts.

A Certificate Signing Request is a request by a client to have their TLS certificate signed by the Certificate Authority built into Kubernetes by default.

Role-Based Access Control (RBAC) is the system used by Kubernetes to administer access permissions in the cluster. Roles allow users to access certain resources within the cluster.

To use the most up-to-date files, Kubernetes version 1.15 or higher is required to run CockroachDB clusters. The database can be deployed on any Kubernetes distribution, including a Local cluster (such as Minikube), Amazon AWS, EKS, Google GKE and GCE, among others. For persistence and replication, CockroachDB relies on external persistent volumes such as OpenEBS LocalPV.

When using OpenEBS with CockroachDB, a LocalPV is provisioned on the node where a CockroachDB POD is attached. The volume uses an unattached block device, which is used to store data.

Once a volume claims a block device, no other application can use the device for storage. If there are limited block devices in other nodes, nodeSelectors can be used to provision storage for applications on particular cluster nodes. The recommended configuration for CockroachDB clusters is at least three nodes with one unclaimed Local SSD per node. 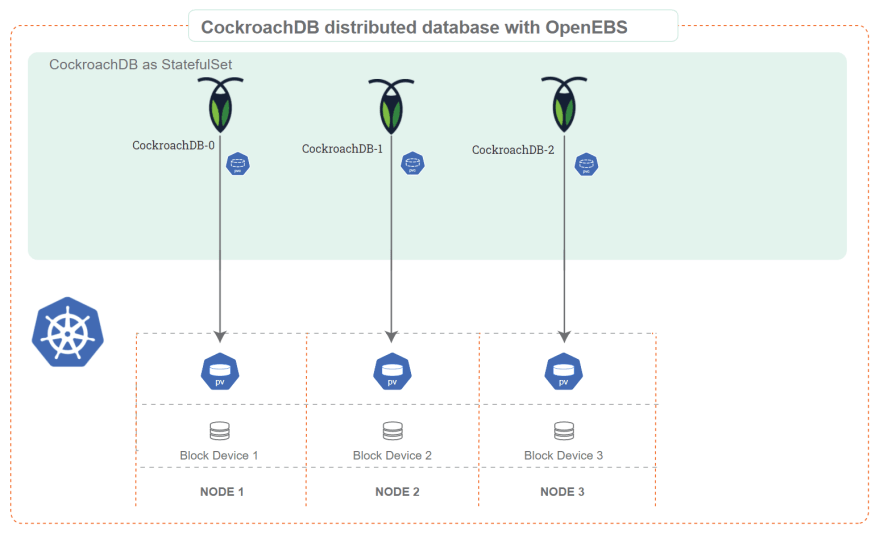 This solution guide takes you through installing CockroachDB Kubernetes operators, and then configuring the cluster to use Local OpenEBS devices as the storage engines. The guide also highlights how to access the database for SQL queries, and finally demonstrates how to monitor the database using Prometheus and Grafana.

Let us know how you use CockroachDB in production and if you have an interesting use case to share. Also, please check out other OpenEBS deployment guides on common Kubernetes stateful workloads at:

This article has already been published on https://blog.mayadata.io/deploying-cockroachdb-on-kubernetes-using-openebs-localpv and authorised by MayaData for a republish.