I started to collect small programming languagess that you can implement in a relatively small amount of time for educational purposes.

The first choice to make is: will you write an interpreter or compiler (or both). How do they relate?

The interesting part is that you can write both interpreter and compiler for the programming language, for example, Lisp (CommonLisp), Scheme (Chez Scheme).

We can categorize tutorials based on host and “new” languages, for example:

The next question to ask is how your programming language will manage memory:

The next question to ask is what your PL will do with types:

All the above apply to every PL. Now you can choose other features that would define for programming paradigm (one or more).

For example, you allow first-class functions, eager evaluation (with call-by-sharing), dynamic types, macros and you get a Lisp.

Or you allow first-class functions, lazy evaluation, static types and you get ML.

On top of that you can add some features, like:

One of the success factors of MAL is that it doesn’t need a parser generator - it is relatively easy to implement Lisp parser. This makes it very portable (implemented in more than 80 languages). The same goes for lis.py - it has an even simpler tokenizer.

Most non-lisp tutorials assume some specific parser generator, which makes them less portable.

Another interesting idea on how to improve this is to make a compiler (“frontend”) which will compile input to a really small subset intermediate representation (for example, Shen needs 46 basic instructions and Haskel Core has 8) then learner can implement compiler or interpreter for the intermediate language.

Here is my collection of tutorials on how to create a programming language. It's a GitHub repo, so you're welcome to contribute. 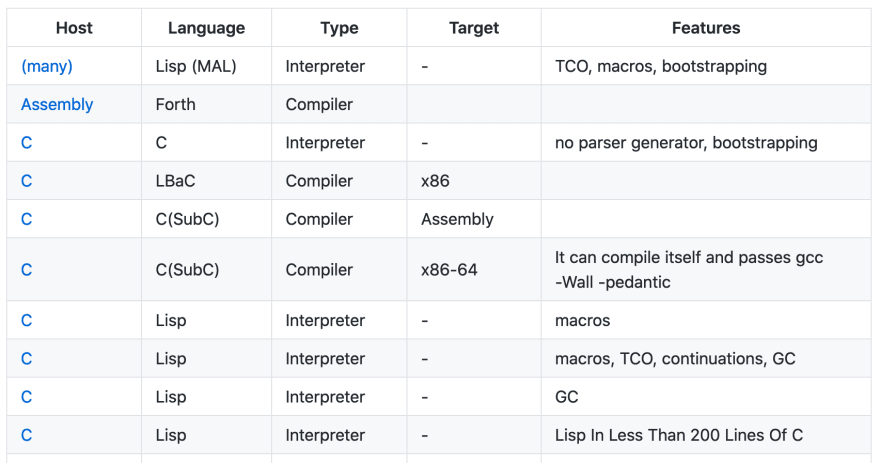