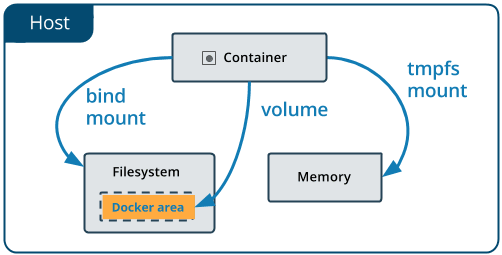 Docker volumes are very useful when we need to persist data in Docker containers or share data between containers.

Docker volumes are important because when a Docker container is destroyed, it’s entire file system is destroyed too. So if we want to keep this data in some way, it is necessary that we use Docker volumes.

When Docker Volumes are needed

Let’s look at the docker image we created in a previous article. The stephenafamo/adonisjs image.

The working directory is /var/www, and the application code is there. If we want to run an Adonis application in a container from this image and we don’t want all our files to be deleted once we stop the container, then we have several choices.

If the -v or --volume flag’s value is a path, then it is assumed to be a bind mount. If the directory does not exist, then it will be created. When we do this, the directory /path/to/app/directory will contain the same files as /var/www in the container.

NOTE : If you are confused about how to use the docker run command or how to run containers, then you can go through the the previous article.

Volumes are the preferred mechanism for persisting data generated by and used by Docker containers. While bind mounts are dependent on the directory structure of the host machine, volumes are completely managed by Docker. Volumes have several advantages over bind mounts:

In addition, volumes are often a better choice than persisting data in a container’s writable layer, because using a volume does not increase the size of containers using it, and the volume’s contents exist outside the lifecycle of a given container.

Creating and Removing a Docker volume

We can create a Docker volume using the command

To list all the volumes, we use the following command.

If we ever choose to delete a Docker volume, we do it using the command.

Attaching a Docker volume to a container

We can also use the -v or --volume flag to attach a Docker volume to a container. However, instead of putting the path to the directory on the host machine as we did with bind mounts, we simply put the volume name.

NOTE : If we specify a volume that does not exist, it will be created

For example, in our stephenafamo/adonisjs image, a new application will be created in the /var/www directory if an empty volume is mounted there.

Using a mount in read-only mode

Since a Docker volume (or bind mount) can be attached to multiple containers, it may be useful for only some of the containers to be able to write to it.

To achieve this, we will need to attach the volume to the other containers in read-only mode. This is done by adding the ro option like this;

This works for both Docker volumes and bind mounts.

So, this covers the common uses of Docker volumes. There are also several volume drivers that allow for some more functionality. Perhaps we’ll talk about that in another article, or maybe I’ll update this later.

As always, I appreciate comments, suggestions and corrections. Thank you.

What is a Feature you Think Ecommerce Platforms are Missing Out on Implementing?

Stephen Afam-Osemene
Part Programmer, Part Engineer, Part Entrepreneur. I have many interests that converge on improving lives with technology
How to use a terminal
#cli #beginners #programming #commandline
How to schedule a task at a specific time in Go
#cron #go #time #programming
Handling PostgreSQL Errors
#postgres #errors #programming

Once suspended, stephenafamo will not be able to comment or publish posts until their suspension is removed.

Once unsuspended, stephenafamo will be able to comment and publish posts again.

Once unpublished, all posts by stephenafamo will become hidden and only accessible to themselves.

If stephenafamo is not suspended, they can still re-publish their posts from their dashboard.

Once unpublished, this post will become invisible to the public and only accessible to Stephen Afam-Osemene.

Thanks for keeping DEV Community 👩‍💻👨‍💻 safe. Here is what you can do to flag stephenafamo:

Unflagging stephenafamo will restore default visibility to their posts.