Today, 22nd of June 2020, is the start of Apple’s Worldwide Developer Conference (WWDC).

Each year, Apple uses WWDC to announce new software updates, new hardware and to talk about how much revenue its App Store processes.

In 2019, 30 billion dollars was paid out from Apple to developers who use the iOS and Mac App Store to sell their digital products.

This year, there’s an elephant in the room. That elephant is called Hey, and it’s a new email application built by Basecamp.

Long story short, the new email application, Hey, was accepted into the iOS App Store without any questions from the black box, which is Apple’s verification team. When they pushed a bug fixing update a few days later, it was denied on the following grounds; Hey doesn’t use Apple’s in-app purchasing mechanism.

When you buy an iOS app or upgrade/make payment within an iOS app, Apple processes this payment and takes a 30% cut for the first year of your subscription, 15% thereafter. This isn’t the case on physical goods, such as Airbnb, but it is the case on say, Headspace.

Apple not only processes the payment, but they also own the customer, handling; refunds, cancellations and updating payment cards – limiting the support businesses can offer their customers. 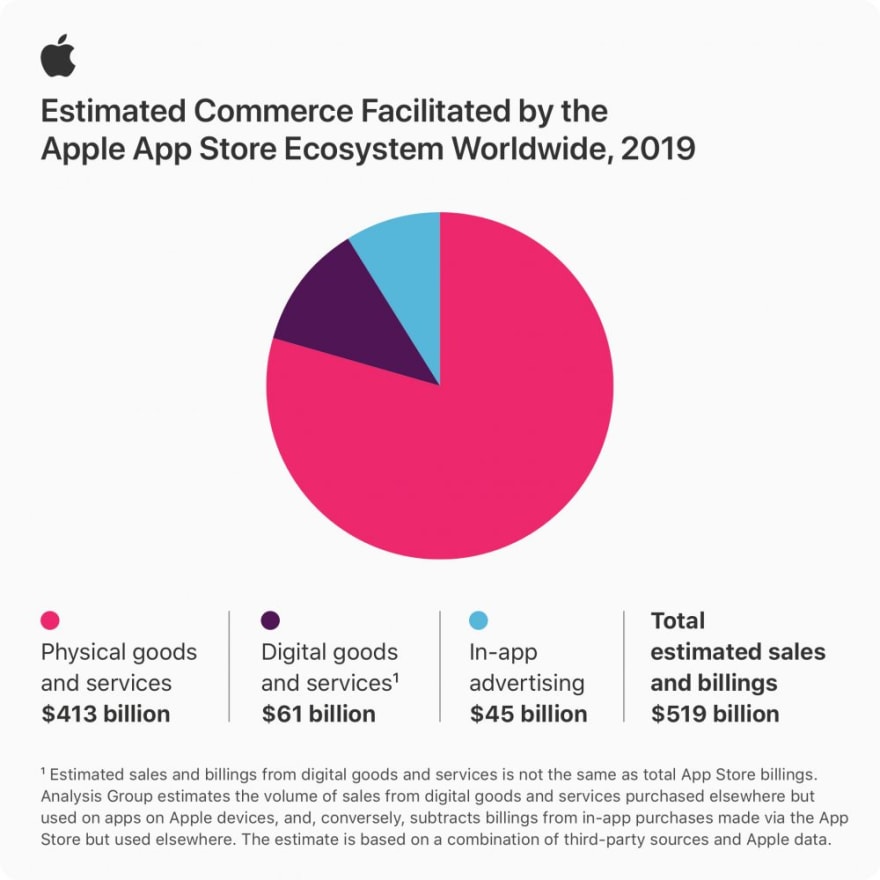 Here’s where things get different with Hey. If you download the Hey iOS application, you get nothing, just a login screen. You can’t sign up or even find out where to sign up. This isn’t uncommon on the iOS App Store. To work around the 30% IAP payment split, app owners have required users to signup on their computers and then login via their iPhone. This means that the app owners can take payment directly from the consumer, bypassing Apple.

Ever wondered why you can’t sign up for Netflix on iOS, buy a new Audiobook on the Audible app or why Spotify is 30% more expensive if you pay through Apple’s ecosystem?

The problem Hey have run into is that, even though they obey all of the unwritten App Store rules of not telling customers to pay out-of-app, they’re still being denied access to the App Store, unless they hand over 30% of their iOS revenue to Apple.

This is a different precedent compared to Netflix, Slack, Outlook or even Hubspot. 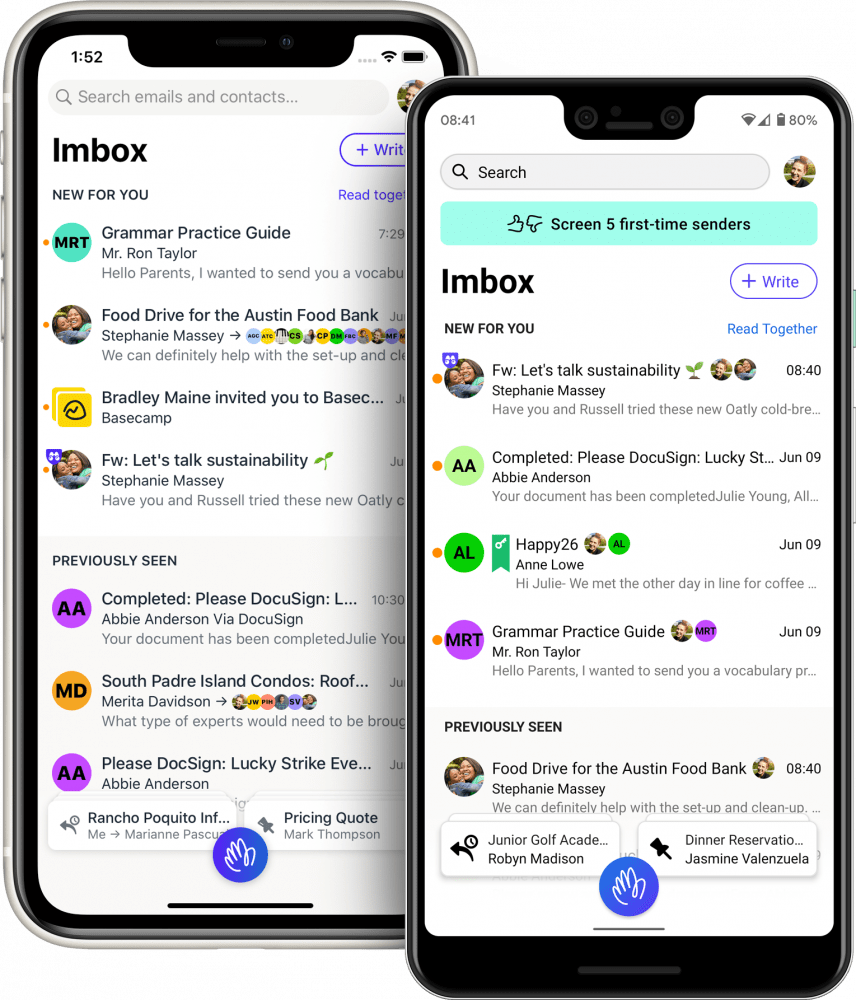 Apple only allows its App Store to run on their phones, which, in turn, has caused a monopoly effect. They control the rules and don’t have to follow precedent if they wish.

This new controversy has caused many large and small app developers to speak up of their frustrations around the rules governing the App Store. Many small developers fear speaking out in case they find themselves mysteriously slipping down the App Store ranking.

So, as a digital agency, how do we feel about this?

30% is a lot
When we tell clients that Apple will take 30% for the first 12 months of their app’s life, they struggle to understand why Apple takes a 30% cut when comparatively other companies, such as Stripe, will only take 1.4% to 2.9% for processing a payment.

Apple is taking a cut around 27% higher than competitors, but for what? Well, the iOS App Store is the only storefront available to 2 billion iOS devices. Apple has created a trusted ecosystem, where they have end-to-end control…

That 27% extra cut is for access to the highest revenue App Store in the world.

Control
Once you pay for a subscription through the iOS App Store, that’s it; you’re Apple’s customer now.

You have to speak to them for refund, upgrades and even to update your payment card. If you run a SAAS business, you know the pain of handling refunds and of payment cards expiring, the latter being a large reason for churn.

If your customer paid through the App Store, you can’t help them with any of the above. You can’t offer them a refund, help them to update their card details or even offer them discounts; all normal things where you run a payment system.

Let’s say your grandparent gets a new smart security camera for their home. They download the app and start paying through the iOS App Store. The customer support for that platform wouldn’t be able to help them with any of the financial details, only point them towards Apple documentation.

Let’s then say your grandparent moves to an Android device and downloads the app required for the security system. It’s all working no problem to begin with. They’re still paying money to Apple, even though they are now on Android. Now imagine trying to explain to your grandparent what to do when their payment card expires in three years.

Our customers
As an agency, we hear time and time again from clients and potential clients how their business wouldn’t work with 30% chunk of their revenue vanishing. Often they already have customers on their web-app and simply want to give them better experience on mobile devices. Should this really cost 30% of their revenue? 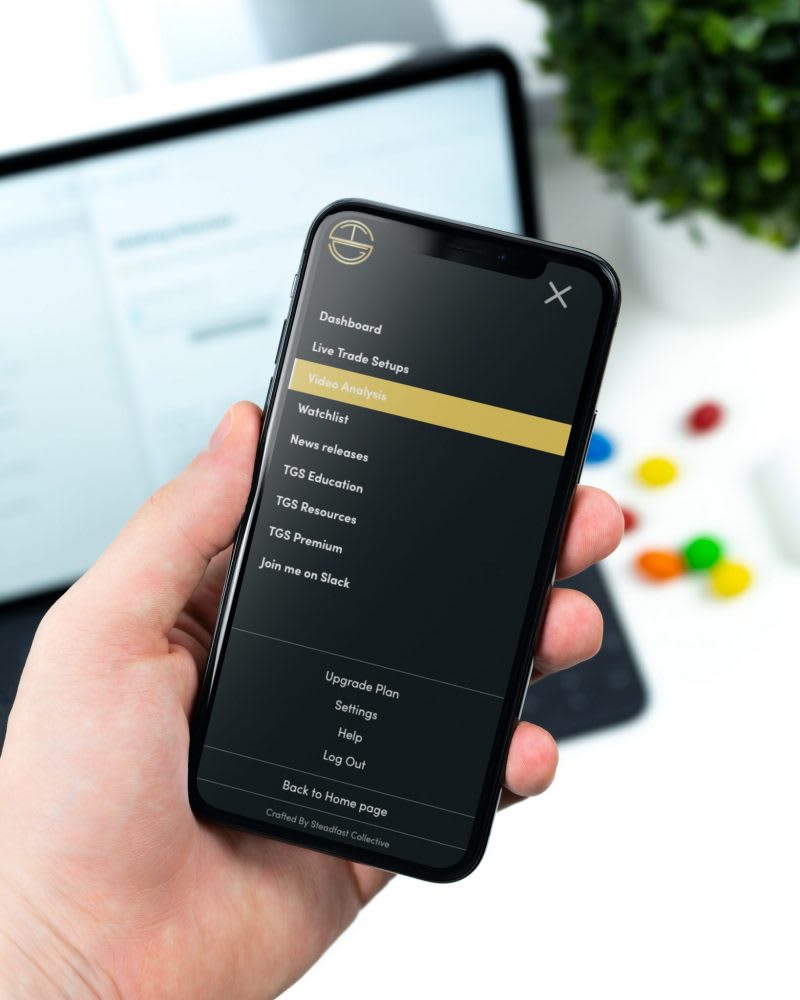 We knew a lot about this issue before the Hey controversy, but with Apple in the press’ spotlight, it’s highlighted the need for this to be more forefront in people’s minds as we consider the future of digital.

Let’s see if Apple address any of their controversy over the next week. Our money’s on absolutely not.

A Quick Recap of Single-Core vs Multi-Core Processing

What to Expect from Google’s Page Experience Update

Pete Heslop
Bringing smart creatives together under one roof to create industry-changing web applications
The M1 Mac - Is it worth it for devs?
#systems #node #codenewbie #discuss
Why do you love programming?
#healthydebate #career #beginners #discuss
What was your win this week?
#discuss #weeklyretro