The choice of programming language matters deeply to developers because they want to keep their skills up to date and marketable. Languages are a beloved subject of debate and the kernels of some of the strongest developer communities. They matter to toolmakers too, because they want to make sure they provide the most useful SDKs.

It can be hard to assess how widely used a programming language is. The indices available from players like Tiobe, Redmonk, Stack Overflow's yearly survey, or GitHub's State of the Octoverse are great, but offer mostly relative comparisons between languages, providing no sense of the absolute size of each community. They may also be biased geographically or skewed towards certain fields of software development or open source developers.

Second is our large-scale, low-bias surveys which reach tens of thousands of developers every six months. In the surveys, we have consistently asked developers about their use of programming languages across ten areas of development, giving us rich and reliable information about who uses each language and in which context.

If you wish to participate in our latest Developer Nation Survey, start here

JavaScript remains the most popular programming language for the tenth survey in a row, with close to 17.5M developers worldwide using it. Notably, the JavaScript community has been growing in size consistently for the past several years. Between Q1 2020 and Q1 2022, 5.2M developers joined the community - one of the highest growths in absolute terms across languages. Not only do new developers see it as an attractive entry-level language, but existing ones are also adding it to their skillset. Even in software sectors where JavaScript is not among developers’ top choices, like in data science or embedded development, more than a fifth of developers use it in their projects. 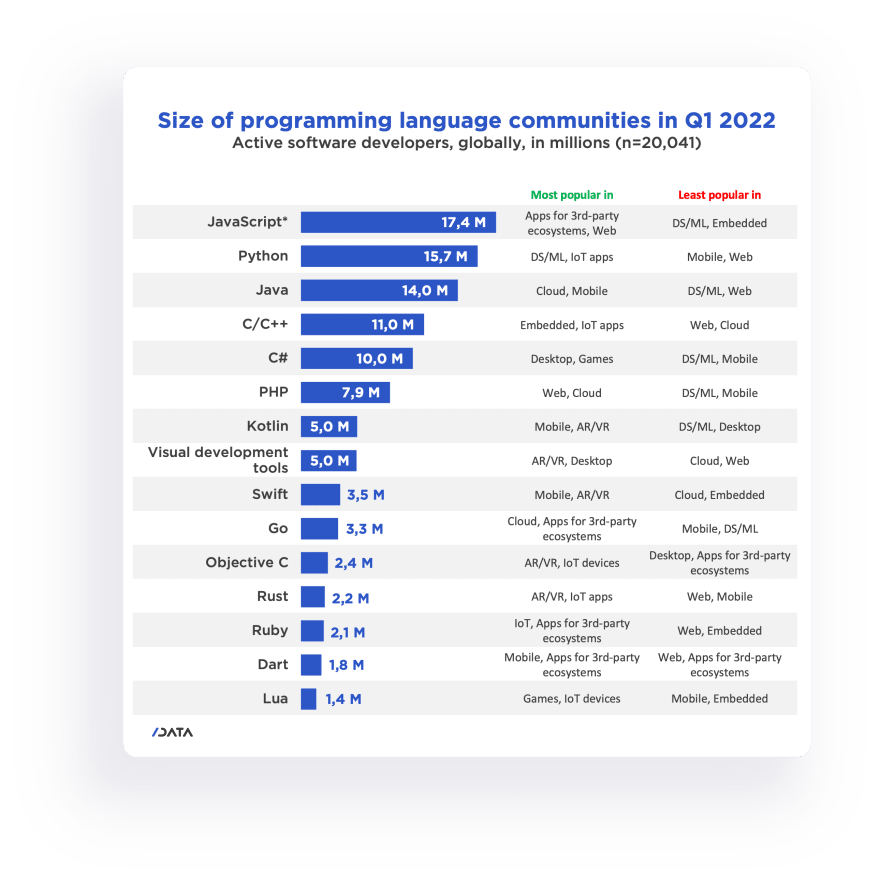 Since surpassing Java in popularity two years ago, Python has remained the second most widely adopted language behind JavaScript, with the gap between the two largest communities gradually closing. Python now counts 15.7M users after adding 3.3M net new developers in the past six months alone. For context, JavaScript added just over 1M developers during the same period. The rise of data science and machine learning (ML) is a clear factor in Python’s growing popularity. About 70% of ML developers and data scientists report using Python. In comparison, only 17% use R, the other language often associated with data science.

Java is one of the most important general-purpose languages, as well as the cornerstone of the Android app ecosystem. Although it has been around for more than two decades now, it keeps experiencing strong and steady growth. Nearly 5M developers have joined the Java community since the beginning of 2021. Our data suggest that Java’s growth is fueled not only by the usual suspects, i.e. backend and mobile development, but also by its rising adoption in AR/VR projects.

The group of major, well-established languages is completed with C/C++ (11M), C# (10M), and PHP (7.9M). Of these, PHP has grown the least in the past six months, with an increase of 0.6M net new developers between Q3 2021 and Q1 2022. As a result, it remains behind C#, which added nearly four times as many developers during the same period (2.2M). PHP may still be the second most commonly used language in web applications after JavaScript, but C# is traditionally popular in many different areas of software development, including desktop and game development.

Another interesting case is that of Rust. Rust has formed a very strong community of developers who care about performance, memory safety, and security. As a result, it is mostly used in IoT software projects but also in AR/VR development, most commonly for implementing the low-level core logic of AR/VR applications.

Developer Nation Survey now live
Take the survey and you could win amazing prizes and gear up!

Once suspended, stateofdevnation will not be able to comment or publish posts until their suspension is removed.

Once unsuspended, stateofdevnation will be able to comment and publish posts again.

Once unpublished, all posts by stateofdevnation will become hidden and only accessible to themselves.

If stateofdevnation is not suspended, they can still re-publish their posts from their dashboard.

Once unpublished, this post will become invisible to the public and only accessible to Developer Nation Survey.

Thanks for keeping DEV Community 👩‍💻👨‍💻 safe. Here is what you can do to flag stateofdevnation:

Unflagging stateofdevnation will restore default visibility to their posts.