“Welcome to Techtro,” says Tim, as he writes the daunting term on the whiteboard in black marker. The tall blonde man boldly stands in front of his bewildered team jammed in a conference room. He calmly returns their awestruck stare while placing the marker back on the ledge of the movable whiteboard.

“Tech-what,” Mike asks with exasperation, turning to his coworker Liz, looking for a companion in his confusion. Her brown eyes echo Mike’s frustration, and he exhales in relief.

“I’m not sure what that is either,” she adds.

Tim clarifies, “It is a chance for us to reflect on the technical aspects of our process as a team. It is short for Technical Retrospective.” He glances at both of his coworkers to see their responses. The blank looks persist on both of their faces. He picks up a blue marker, and writes three categories. He reads each aloud:

Tim continues, “The goal is to create action items for us to improve our work lives.” He passes out sticky notes and odor-less markers. “I would like you to write down your thoughts for each of these categories. Please write one idea per sticky note, with as many stickies as you like per category. I will limit our time to five minutes.”

“Why do we have to use the fatter tipped markers?” asks Liz. “I prefer pen.”

“It will be too difficult to see pen from your seats,” Tim points out.

“I’m starting a timer now. I will give you reminders halfway through our time, and when we have one minute left,” says Tim, pulling out his chair, and sitting down.

Mike and Liz begin to write down their thoughts. Liz brushes her hair to her left side, and squints her eyes in concentration. Mike scratches his beard while deep in thought.

Tim suddenly warns, “Time is up, finish your current sticky.” He stands up from his chair, with a slight groan. “We will go around in a circle, sharing two stickies each. They can be from any category. If you have a similar sticky, please pass it forward. Mike, why don’t you start us off?”

“Well, first off, I am proud that we are pushing to production once a week,” Mike says, with a giant grin. “However, I would like to figure out a way to push without waiting for Jerry to run the update SQL script.”

“Who is Jerry,” questions Liz.

“Our DBA on the east coast,” informs Mike, “If he ever quits, we are screwed.”

“Shh don’t say that,” scolds Tim. His eyes growing wide at the very idea. He places the stickies on the whiteboard. “Alright, Liz, what do you have?”

“I am really proud of the user purchase graph code that Mike and I wrote last week,” she says with excitement. “We used a doubly linked list to do the interpolation math. It was very elegant,” she chimes in, with an ear to ear smile. “I didn’t think I would ever use data structures after college.”

Tim takes her sticky note, and places it in the "What code are you proud of" category. He agrees, “That’s awesome. You get another one.”

Liz winces a little bit, “I’m not sure how to say this but…I hope that we get to keep growing the team. I mean, Tim since you are in lots of meetings, Mike and I are pairing almost everyday.” Mike’s face shows a glimpse of tiny frown, so Liz quickly adds, “I like pairing with you Mike, but I just want to keep learning from both of you.” Mike gives a head nod, seeming to accept her explanation.

“I have that one too,” says Tim, adding his sticky to the left of Liz’s note.

The team continues to go around until all of the stickies are on the board, stopping briefly to talk about what each one means.

“Alright,” Tim says. He clears his throat, “Now for the most important part.” He writes the phrase Actions Items on the far right side of the board. “We are going to dot-vote on which New Things to Try and Like to Change stickies. Everyone gets two votes.” A perplexed Mike asks, “How do we vote?”
“Grab a marker and draw a dot near the sticky you want,” responds Tim, with a smile. “Oh use the whiteboard markers please.”

“Hmm, what if the sticky I want to vote for is grouped?” asks Liz.

“Either draw a circle around the group and vote, or vote on a specific sticky,” says Tim.

As Liz and Mike approach the whiteboard, Tim steps back to let them vote. Mike frantically glances around the board trying to decide. Liz votes without hesitation on “growing the team”, and “breaking apart user stories”. Mike adds a vote to “growing the team”, but uses his second vote for “one free hour a week”.

As they return to their seats, Mike turns toward Tim, “Aren’t you voting?”

“When the team is this small, I will refrain,” replies Tim. “I want to make sure that you both have as much control over our process as possible. As Liz pointed out earlier, I am in lots of meetings. If I have a concern, I will make sure to voice it.”

“Here are the ranks: two for growing the team, one for free hour, and one for making stories smaller,” reads Tim.

Tim writes “Talk to Jen about growing team [Tim]” under the actions section. He says, “Well, I have to talk to the boss in order to get approval to grow the team.” Pausing for a moment, he asks, “Would either of you like to chat with her about creating smaller stories?”

Both Liz and Tim look down at the mahogany table, neither saying a word.

After a few seconds, Tim nudges, “How about you talk to her as a pair?”
“I guess,” says Liz.

“Before we talk to her, can we please run our talking points by you?” begs Mike.

Tim assures them, “Without a doubt. In that case, I am assigning this last item to both of you.” Tim adds their initials next to the action item.

“Welp, that is Techtro. We will probably do this once every two weeks to start,” says Tim, as he steps back to takes a picture of the action items with his phone.

Liz tilts her head to the left, “Will we always use this format?”

“Nope, I have a few different methods that I like to use to break up the monotony,” answers Tim. “It will help us think from different perspectives.”

“Where will you put the action items,” asks Mike.

Tim responds, “On our whiteboard near the desks. Is that alright?”

Liz and Mike both nod in agreement. The team goes back to their desks feeling confident that work at Big Ticket Books will keep getting better.

This is an excerpt from the book I am writing called Agile Software In Process. It is available now at https://leanpub.com/agilesoftware.

What does agile software development actually look like? This book contains a story of how a team tackles their social, technical, and business challenges using agile principles and values to deliver value sooner. Code examples included. 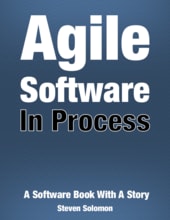 How to send a web form without code or any backend

Software Engineering is a Loser’s Game

Steven Solomon
I am a lead software engineer, speaker, and writer. https://soonernotfaster.com/about/
Mocking Functions in Elixir With ExDoubles
#elixir #testing #showdev #agile
When was the last time you made a change to your process?
#agile #discuss #productivity
How to Document Technical Tasks?
#agile #productivity