A quick glance at smarty and it is abundantly clear that it has been around since PHP 4.x. But why would you use a template engine in the first place?

Well, the initial idea was to have people with little technical knowledge produce templates and designs. And pretty soon functionality was required to facilitate common tasks. Much like we now offer custom elements or React components to web designers. While the need for such tooling changed with less backend rendered content, another advantage still lives: the need for reusable markup applied to various use cases while being cleanly maintained separately from the functionality.

So it is no wonder that to this day template engines like pug, blade or twig still dominate backend-delivered content.

Unfortunately, they have kept some bad habits. It is simply "unclean" to have any kind of functionality in your template that goes beyond reactive/conditional rendering. Most of the functionality most in the field provide should never be used within a template.

Let's look at an example from twig's documentation

The first thing we notice is the variable declaration "users". So we now have to consider that variables are defined in a template, which is neither good for maintenance nor for re-usability. But granted, this is a constructed example and you would normally pass in these names? Okay. But when is it okay to define variables in a template, then? Think. Think harder. No? But why can you do it then if you shouldn't? Of course there are edge-cases you can come up with, but in 99.9% of the cases you make your debugging and maintenance life harder.

We are now outputting "users" in a loop. We should note that twig offers many filters, so another way of writing the intended outcome is

which may save us a few keystrokes but certainly does now help in regards to readability.

Lastly, we seem to have not left the PHP flow of blocks. We should remind ourselves that this example in pure PHP would could look like this:

Not too much of a difference, is it? However, "free" PHP in the template should be avoided and therefore template engine have their legitimacy - unless ...

Unless they are like most of them: expensive overhead packed with functionality we wanted out of the template in the first place.

Well, we now get into the realm of taste, but as a full-stack developer, the first thing I want to do is to think in elements rather than blocks.

It is less disturbing and I am used to such a markup and thinking from front-end technology. And, it does save space:

And what if I need functionality in my template?

As said before, there are certain edge-cases where my initial statement that a template engine should only provide loops and conditions are rightfully challenged. In such cases, rather than relying on a particular set of functions and hope they fulfill your needs, I want to be able to create functionality as needed, while re-usability should be possible:

And then use it in my templates:

Lastly, we should probably speak about performance and whether or not caching is a necessity. Instead, I will refer to a video of mine to clarify that: 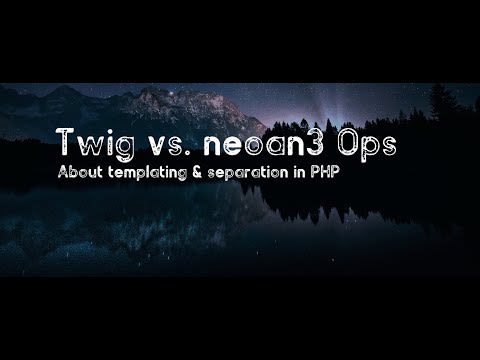 You will notice that the templating of neoan3 was part of the string operations class back then, but by now neoan3-apps/template is a solid, standalone solution redy to play nice with whatever framework you plug it in.

I would like to know what you think. Between the relatively straight forward Blade from Laravel to syntactic sugar like Pug: what do you like and why?

Unlocking the Potential of OpenAI: How Developers Can Leverage AI to Improve Their Work

neoan
Passionate generalist conquering the web one project at a time. Whether authoring libraries for node, JS, PHP, or Rust, I am always on the lookout for better solutions to common problems.
i18n: A lot to think about
#tutorial #php #opensource #a11y
Code Along: Taking Lenkrad for a Spin
#tutorial #php #webdev
High speed-dev: A minute to be up & running
#neoan3 #php #showdev #laravel

Once suspended, sroehrl will not be able to comment or publish posts until their suspension is removed.

Once unsuspended, sroehrl will be able to comment and publish posts again.

Once unpublished, all posts by sroehrl will become hidden and only accessible to themselves.

If sroehrl is not suspended, they can still re-publish their posts from their dashboard.

Once unpublished, this post will become invisible to the public and only accessible to neoan.

Thanks for keeping DEV Community 👩‍💻👨‍💻 safe. Here is what you can do to flag sroehrl:

Unflagging sroehrl will restore default visibility to their posts.