Now, before you come at me with a pitchfork — I'm saying this is the easiest way to make a mobile app, not the best way to develop an app for your use case.

I started weightlifting about a year ago and I needed a way to time the break I took between sets. A mobile app was the obvious solution but I needed one that met my requirements:

While there may have been an app on Google Play that met my requirements, I didn't bother looking, because I knew I could create my own mobile app in 30 minutes. But how?

If you haven't heard of CodeSandbox, it's a web-based development environment that makes it super easy to create JavaScript applications. 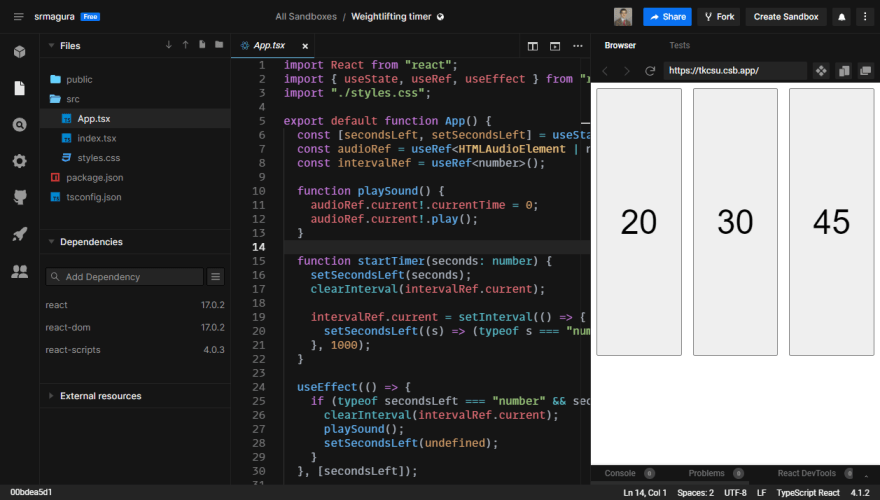 The first step to creating an app on CodeSandbox is to select a template. I chose the React + TypeScript template, but you can use normal JavaScript, Vue, or whatever else floats your boat. I won't go into the details of the app's code since there are already many great resources for learning React and JavaScript timers.

All things considered, it took around 30 minutes to finish the sandbox, which you can view here.

Clicking one of the buttons starts a timer for that many seconds. A sound is played when the timer finishes.

Getting the app on my phone was as simple as typing the sandbox URL, tkcsu.csb.app, into Chrome's address bar on my phone. The CodeSandbox React templates are set up as Progressive Web Apps (PWAs), so Chrome immediately prompted me to add the app to my home screen! [2] Here's how it looks: 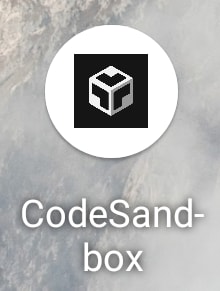 I wasn't bothered at all by the CodeSandbox branding, but you might want your own icon and app name to show up instead. While this is normally easily accomplished by adding a web app manifest, I still got the CodeSandbox logo after adding my own manifest.json. It turns out CodeSandbox overwrites your manifest with its own. 😑 There's a closed GitHub issue about this with a hacky workaround if you're persistent.

Manifest issues aside, the app works perfectly and has been used in "production" (by me) for over a year!

CodeSandbox is a great way to make your first app or create a mobile utility for personal use. But if you want to get serious and create a professional-grade mobile app, there are better options.

At one end of the spectrum, you have truly native iOS & Android development. At the other end, you have PWAs and hybrid app frameworks like Ionic. For me, React Native hits the sweet spot. There's also Google's Flutter and the upcoming .NET MAUI. I won't do a detailed comparison of these options here, but it may be the topic of a future post.

[1] To be fair, CodePen has improved since I last used it and now allows you to install npm packages.
[2] I've heard Apple isn't the biggest fan of PWAs, so you may not get prompted to add the app to your home screen if you use iOS. Of course, you can still bookmark the app and access it through your browser.