If we stop and look around, we will notice that languages (in general) have rules.

In the English language, if we want to be good speakers, we must be good at grammatical rules. When we think about coding, when we want to create a utile program, we must follow the "rules" of the programming languages to see it work.

Syntax and semantics are to programming languages as grammar rules are to languages.

For example, when we see that Java requires semicolons after statements, this is part of the Java syntax.

If we do not align the syntax of our program to the programming language, our program will not run. Here is where we see the importance of following rules.

The semantics of a programming language
In a dictionary, one of the definitions of semantics is:
"The study or science of meaning in language." In other words: study, signs, and interpretation of words. In the end, it helps to understand, to comprehend (and a little more) clearly.
Semantics works to describe structures in a programming language. We have to write our program in the correct format to run the program. 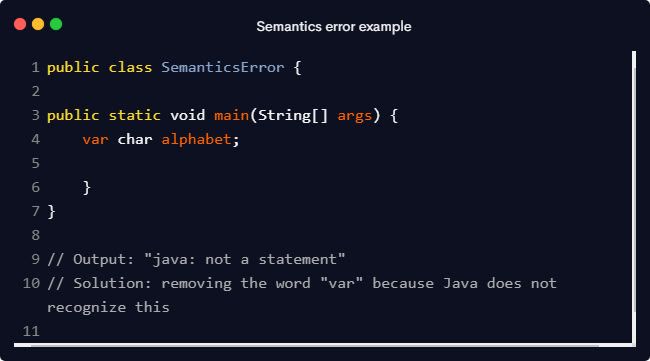 How would you simplify this concept?

Milena
Keep learning to be the best programmer in your street ☻
What do you think about the involvement of philosophy in technology?
#discuss #programming
Static methods and member variables
#java #beginners #programming
Control structures
#java #programming #beginners #discuss

Once suspended, srcmilena will not be able to comment or publish posts until their suspension is removed.

Once unsuspended, srcmilena will be able to comment and publish posts again.

Once unpublished, all posts by srcmilena will become hidden and only accessible to themselves.

If srcmilena is not suspended, they can still re-publish their posts from their dashboard.

Once unpublished, this post will become invisible to the public and only accessible to Milena.

Thanks for keeping DEV Community 👩‍💻👨‍💻 safe. Here is what you can do to flag srcmilena:

Unflagging srcmilena will restore default visibility to their posts.