A data pipeline is typically used to extract, transform, and load data from the source platform to the destination system. This process usually involves aggregating data from multiple sources, transforming, validating, and eventually loading it into the target system. Every now and then, a data pipeline requires a redesign. This could be due to constantly evolving customer requirements, system performance metrics (including cost, time, etc.), and more. 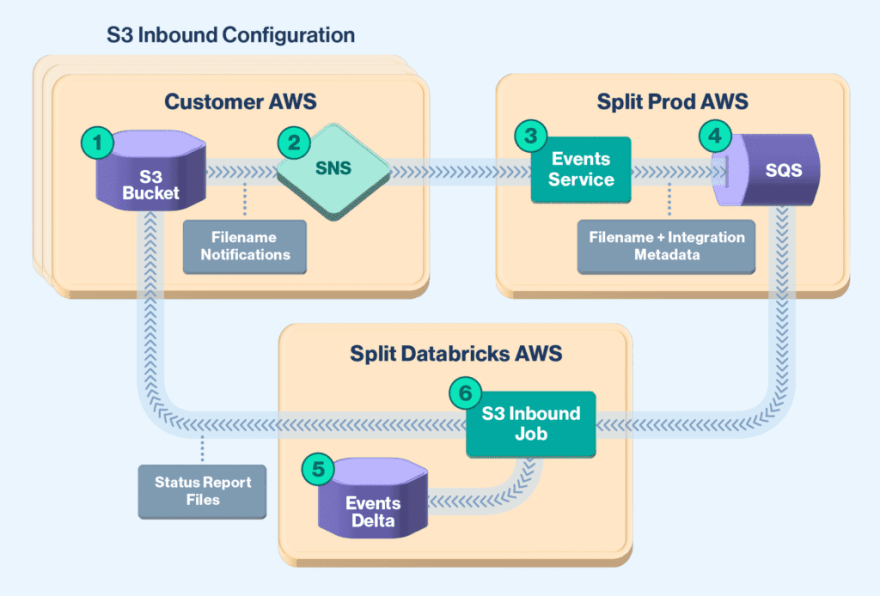 As depicted above, data in Split’s existing S3 Inbound Integration pipeline is ingested from the customer buckets, sending file notifications to an AWS SNS topic. Then, this SNS topic invokes Split’s Events service’s import endpoint to verify requests against existing integrations. As a result, Split asynchronously sends metadata of the file through the AWS SQS queue

Split’s S3 Inbound Job runs on a cadence of every 10 seconds to determine if any new messages are present in the AWS SQS queue. Upon receipt of new messages, the S3 Inbound Job processes files to extract and store data within Split’s Events Table. Upon completion, S3 Inbound Job generates a consumed files status report and stores it in the configured customers’ S3 bucket.

Split’s existing S3 Inbound Integration pipeline was built using a single Spark Batch Job. As a result, all of the ingested data files to the existing pipeline were consumed sequentially. Needless to say, this causes bottlenecks for the S3 Inbound Integration. In order to increase throughput, we either vertically scale these instances or horizontally add more of them. The total cost of the existing S3 Inbound Job increases by more than 50% in terms of Databricks Units (DBU).

Additionally, the status report generated for the consumed files lacked valuable information that customers desired. For example, the total number of records in each file, error codes associated with them, and more. 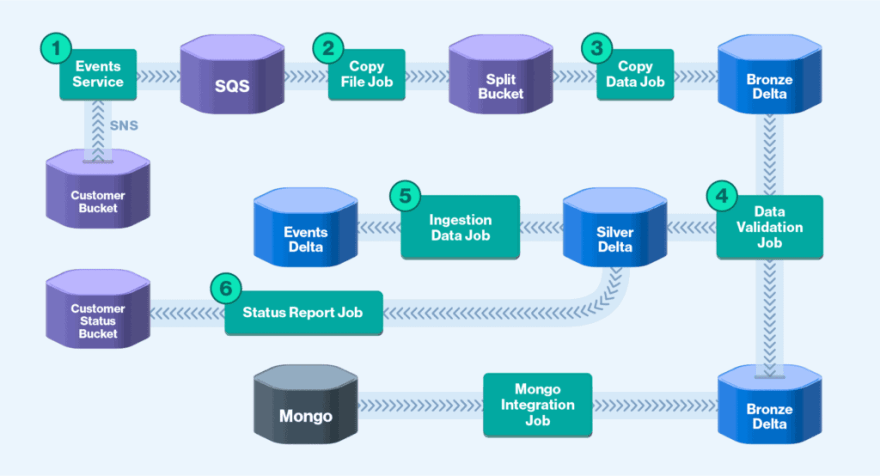 Similar to that of the existing pipeline, data is ingested in the new pipeline from the customers’ S3 buckets. This data then dispatches file notifications to an AWS SNS topic. Then, the Events Service verifies import requests against existing integrations and asynchronously sends file metadata through an AWS SQS queue

However, now the new pipeline’s Events Service, as portrayed in Fig. 2, forwards messages to a new AWS SQS queue. A Copy File Job now reads these messages and places them into an internal Split S3 bucket. Next, a Copy Data Job uses Databricks’ Autoloader to efficiently load them into a Bronze table. Then, a Data Validation Job determines whether the data is valid or not against the MongoDB Integration Table.

Just building this new Inbound Integration pipeline was not enough. It was not only vital that Split reduce costs, but also ensure its scalability and reliability. For the latter, Split used feature flagging to run A/B testing between the existing and the new pipelines as seen in Fig. 3.

Split used a feature flag (Fig. 3) approach to control data flow into two AWS SQS queues. The first SQS queue sends data to the existing pipeline while the second sends it to the new pipeline. This allows both pipelines to seamlessly co-exist in the production environment for A/B testing.

Additionally, Split’s feature flag strategy allows to fine-tune the amount of data ingested through Split’s Allocate Traffic feature. It can also seamlessly onboard customers onto the new pipeline with Split’s Set Targeting Rules. Furthermore, Split’s Default Treatment assists in quicker rollbacks to the existing pipeline with a push of a single button. Whether it is on-demand or in the event of unforeseen production pipeline issues, Split has you covered.

The new S3 Inbound Integration pipeline has six new Spark Jobs than that of the existing pipeline. These new jobs ensure that the new pipeline scales faster and better than the existing one. For example, picture a testing scenario where there are more than 50 GigaBytes of simulated data plus normal production data. This data can be ingested within 5-minute intervals, the new pipeline was able to process both data within 15 minutes. The pipeline is also horizontally auto-scaling into fewer instances. In comparison, the old pipeline would need 3 times as many instances and 10 hours to process the same data.

With controlled rollouts, Split has successfully migrated a few customers to the new S3 Inbound Integration. It’s been active for more than one quarter in production environments with zero customer impact, providing enhanced status reports in near real-time.

How to implement react-leaflet.js (open-source map in your react project 🗺️)

Once suspended, split will not be able to comment or publish posts until their suspension is removed.

Once unsuspended, split will be able to comment and publish posts again.

Once unpublished, all posts by split will become hidden and only accessible to themselves.

If split is not suspended, they can still re-publish their posts from their dashboard.

Once unpublished, this post will become invisible to the public and only accessible to Split Blog.

Thanks for keeping DEV Community 👩‍💻👨‍💻 safe. Here is what you can do to flag split:

Unflagging split will restore default visibility to their posts.