I'm a Windows user, I have been a Linux user as well but I have found that Windows is a bit less neckbeardy for me, both have their pros and cons. One of the big cons with Windows for me was when I started learning web development.

That was until Windows Subsystem Linux came along 🙏

I love it, you can have a bash shell in Windows and run all your node apps through it too and with the Windows 10 Fall Creators Update WSL is really straightforward to set up.

Quick backstory on why I'm posting this: I nuked my laptop the other day as I was having issues with bash on Windows. Related partly to using nvm with WSL and generally getting frustrated with how my computer was performing. I realise now I over reacted.

So I have had to set up my development environment again from scratch, luckily for me I keep all my settings and config information in a GitHub repo in the event of me getting a new computer or to recover from a catastrophic event [like a nuked computer].

Here's how I set up my Windows Subsystem Linux for my development environment.

This is my opinionated view on my specif setup and usage of WSL and this is my step by step guide for the next time I have to spin up a development environment from scratch on Windows.

So, after installing WSL from the Microsoft Store and adding your default user, fist thing is to update and upgrade all the things.

If you've not used any Linux distributions before the -y in the upgrade statement is to default the answer to yes for any prompts that are displayed in the terminal. You might not want to do this, as there may be some programs you don't want to update but I do.

You wont have these messages 👆

To compile and install native addons from npm you may also need to install build tools, I need this for Gatsby images which uses sharp which in turn uses node-gyp:

Installing node via the instructions given on the nodejs.org site doesn't give the correct permissions for me, so when trying to npm install anything I get errors, I found using using n helps:

As it's a fresh install then we can go ahead and use n-install with:

This will install the latest stable version of node 👍

Once the script is complete restart bash with:

Check your node and npm versions:

Fish is now my go to shell purely for the auto complete/intellisense 👌 there's also some nice themes you can get for it too.

Oh My Fish is like a package manager for Fish enabling the instal of packages and themes.

Take a look at fish shell in action:

The start of the beginning

Ok, so that is a basic setup for WSL, you'll probably want to get Git set up now, I have been using SSH over HTTPS for a while now on WSL.

At the time of writing this WSL Git integration with VSCode doesn't > work so I have added a Git install to my windows machine, you can > omit this and go full Git via the terminal but I really like the > VSCode git integration.

To get SSH set up on your machine take a look at this handy SSH setup. I say SSH instead of HTTPS 1. because I had all sorts of issues with the Git credential manager and the keyring manager in the end it was actually quicker to create an SSH key and authenticate with GitHub - the guide I linked walks you through it.

If you have all your dotfiles backed up in a GitHub repo then now is a good time to add them to your WSL folder, the last times I did this I manually set the permissions after moving each of the the files but have since discovered rsync to move all the files.

That will copy the contents of my dotfiles folder to the ~/ (home) directory in WSL, you can check them with: 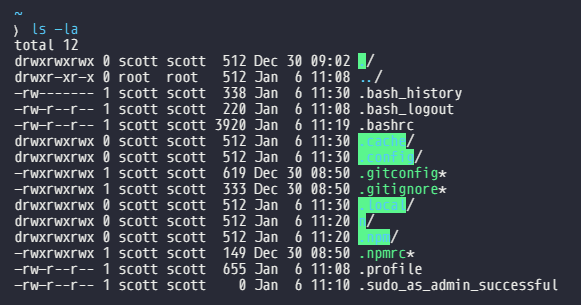 I copied across my .gitconfig, .gitignore and .npmrc dotfiles pictured here and you can see that the permissions are not consistent with the .bashrc file.

So, the only way I know how to change the file permissions is with chmod to get the ordinals of a similar file use stat:

This will list out all everything that begins with a . here's mine:

I only want to change .gitconfig, .gitignore and .npmrc here so I'm going to do this: 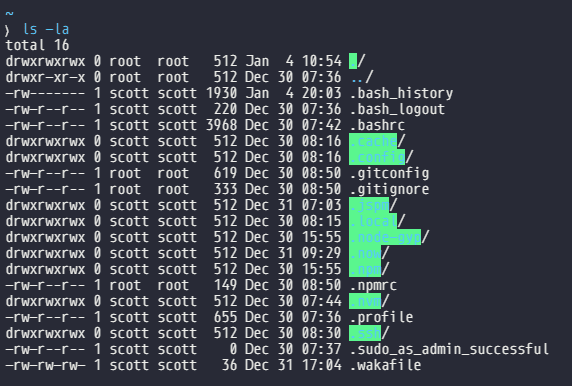 Ok now were up and running with an up to date Ubuntu install, node and fish terminal. Of course there's still the case of installing all your global npm packages you want for development now.

If there is anything I have missed, or if you have a better way to do something then please let me know.

Find me on Twitter or Ask Me Anything on GitHub.

Installing WSL on another drive in Windows

How Startups Metrics Can Help You Measure Your Startup Progress?

Once suspended, spences10 will not be able to comment or publish posts until their suspension is removed.

Once unsuspended, spences10 will be able to comment and publish posts again.

Once unpublished, all posts by spences10 will become hidden and only accessible to themselves.

If spences10 is not suspended, they can still re-publish their posts from their dashboard.