Load balancing is a technique(algorithm) used to distribute incoming network traffic onto a group of servers. It provides a single entry point for all public users to a service hosted by a server. Production-grade servers are generally run behind load balancers because they can “even-out” the incoming load across the servers, thus preventing server overloads. Load balancers also provide a secondary functionality to the servers they are routing traffic to: they act as a reverse proxy. A reverse proxy is like a middle-man between the group of servers and the users. All requests handled by the reverse-proxy are forwarded to the appropriate server based on the request conditions. The server then responds back with its data, which is then directed to the users from the reverse proxy. In this way, r-proxies keep the identity of servers anonymous alongside preventing access to the main servers where sensitive data like configuration files, tokens, secrets, etc. are stored. 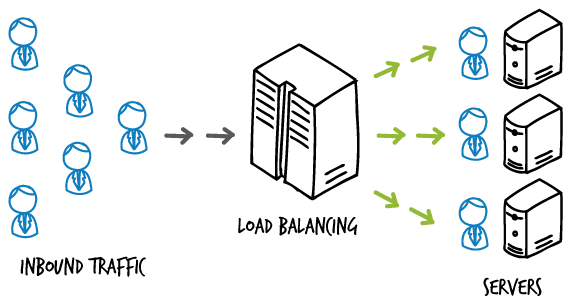 NGINX is a fast and free open-source load balancer that can also act as a reverse proxy. On the other hand, ELB is a load-balancing service provide by Amazon AWS. ELB can further be of 3 main types: (1) ALB, (2) CLB and (3) NLB. A newer class of load-balancers called the gateway load-balancers have also been add into the family of cloud services AWS provides. The idea for this tutorial is to form a cascading multi load-balancer architecture that can provide a highly available Node.js server running on multiple ports.

Note to users : There are many ways of implementing infrastructure for Node.js applications on AWS, including ones that utilize AWS’s own ECS and ECR ecosystem for docker applications. However, this tutorial doesn’t focus on that, and aims to better understand the mechanism behind EC2 instances, load balancers and how they interact with docker over load-balanced and proxied ports.

Overview of the architecture 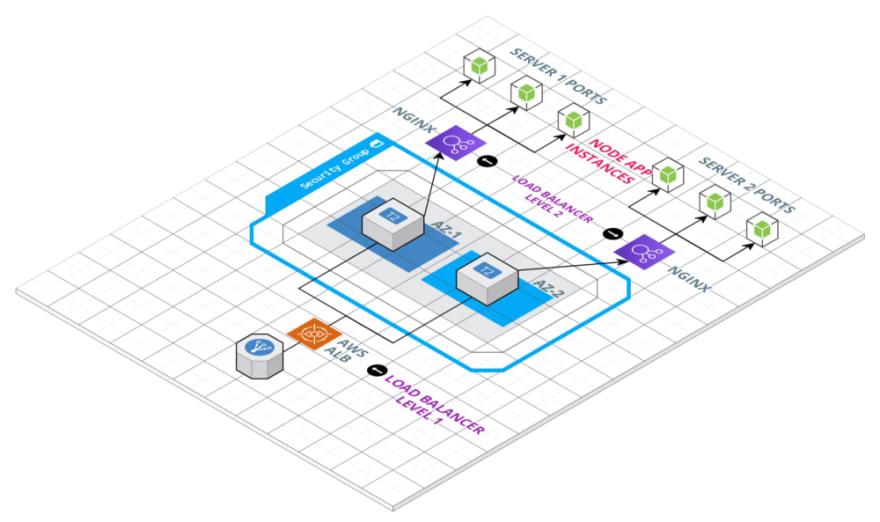 This is the architecture that we’re aiming for. Multi-level load balancers managed by AWS and NGINX which will help us maintain multiple ports on each EC2 instance for our node apps. The good thing about this architecture is that the 2 instances are in different availability zones (AZ1 and AZ2), as a result, even if one zone goes down, the other zone remains functional. And our application doesn’t crash.

For the sake of simplicity, we use a standard starter Express node app, which looks like this:

The ports are provided to the express app via the PORT environment variable. We will feed these port values via Docker. This is a very simple task thanks to docker-compose. There’s another environment variable SERVER_ID, however don’t worry, as it’s only for demonstration purposes only. Once the whole setup is ready, the SERVER_ID will let us know which server the load balancers are pulling the response from. This will help us to validate that our infrastructure configuration using the multi-level load-balancer/r-proxy is running the way it should be.

These type of configurations are common in production pipelines. Generally the main app servers are placed in a VPC in such cases. One informational point about the load balancers is that, level 1 load balancers are often categorized as public-facing, as they deal with the actual client requests, while those at level 2 are internal load-balancers, whose job is to route requests between sources.

Log in to your AWS account and go to EC2 dashboard. We will be following these steps to setup new servers and get them ready for Docker:

The first of the 2 instances have been launched now. Follow the same steps for launching the next instance, only changing the subnet to some other value than the previous one, and using the SSH keypair you created a while ago.

Containerizing the app and NGINX configuration

For this tutorial, we will use this repo for the app:

This will help us speed the process through. The hierarchical view of the repo is given below: 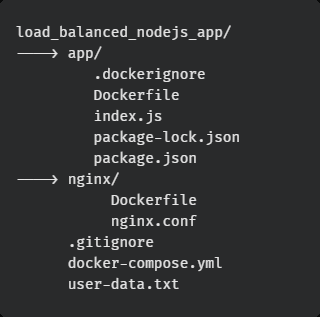 The app folder contains the node server source code along with the Dockerfile. In the nginx folder, there is a configuration file nginx.conf that defines the upstream server port configuration:

e configuration files specifies that the main NGINX server should listen to port 80, the root location “/” will relay the request(proxy pass) to an upstream defined in this file named lb. This is an upstream object that specifies how many servers will be included(these are the express servers that we mount via docker-compose, more on that in a later section), and what ports these servers will be internally running on, while the reverse proxy load balances the traffic from port 80.
In our case, the upstream proxy will direct traffic to ports 1000, 2000, and 3000. These port numbers must match the internal PORT value that is sent to each express server instance as an env-var, which we will define in the docker-compose YAML file.
For each of the launched instances, we do the following:

Your isolated servers should now be running three process of the express app in the background. All we need now is to mount this system using the load-balancer AWS gives us, AWS ALB.

Mounting the system with AWS ALB

At this point, both the instances are ready for mounting. We are going to set up an application load balancer in AWS by following these steps:

Paste the DNS name into the browser, and hit Enter. You will see that every time you refresh your browser page, the response sends back different PORT and SERVER_ID values. This validates the system because by default, NGINX and AWS load balancers use Round Robin algorithm for load balancing.

Our system is now guaranteed to be very highly available and able to withstand spiky and massive amount of traffic over prolonged durations of operation, given the multi-load balancer configuration we have deployed. As a follow up to this tutorial, I shall also post another article showing how to create and maintain a deployment pipeline that integrates with source control and deploys our changes to the servers upon commits to the GitHub repo.