With more and more software engineering teams gravitating to the CI/CD model, the onus to reduce the time to market by delivering a foolproof product is increasing. And in QA, the only way to ensure minimal impact from bugs is to test the code as soon as possible and fail fast.

For QA teams, it means increasing test coverage through automation, but often the sheer number of tests required to be performed along with the paucity of time to test the features means that classical sequential automated tests are not enough. Parallel testing allows teams to perform automated tests against several configurations at the same time to scale downtime and budget constraints while allowing for increased test coverage and ensuring quality.

Parallel Testing: What it is and How it works

Parallel Testing is a process to leverage automation testing capabilities by allowing the execution of the same tests simultaneously in multiple environments, real device combinations, and browser configurations. The overarching goal of parallel testing is to reduce time and resource constraints. Unlike distributed testing, where the different test components running in a distributed manner interact with each other, the parallel test approach is free from any such interaction.

To better understand how parallel testing helps boost standard automation testing capabilities, let us take a simple example --- an automated functional test of a signup form. To perform this test for 45 different Browser/OS configurations, with each test taking an average time of 2 minutes, then the total run time of tests would be 90 mins or 1.5 hrs when run successfully in sequence.

Now imagine, when running 3 parallel tests simultaneously, the total execution time would have come down to 30 mins.

And for 6 parallels, it would be even further reduced to 15 mins- a far cry from what was expected before.

Considering this scenario to be one of the most basic functional tests that are automated, it boggles the mind how parallelization of tests can shave valuable minutes and hours from the most cumbersome of test suites.

The number of parallels required to optimize test times depends on the following key factors:

For more complex scenarios involving a shift in any of these parameters, it is best to use a Parallel Test Calculator to understand the number of parallel sessions required to achieve test coverage and build execution time goals.

When to perform Parallel Testing

How to approach parallel test creation

A common way to perform parallel testing is to create a suite of projects to test browser compatibility and then a master project to test the aforementioned set of projects. Upon set up, it is time to create a set of Entry and Exit Criteria.

For Entry Criteria, we must define those checkboxes that must be ticked off before test execution starts, for e.g.

The exit level criteria can focus more on:

TestNG is a Java-based testing framework that helps to organize tests in a structured manner and enhances the maintainability and readability of test scripts. The large feature set of TestNG allows for the easy configuration of parallel tests. The auto-defined XML file in the TestNG framework allows testers to set the parallel attributes to methods/tests/classes by leveraging the allowance for multithreading in Java. This file can help determine the number of threads desired for parallel test execution.

The parallel attribute can be extended to:

Whereas the thread count attribute can help define the number of threads the tester wishes to create when executing the tests in parallel.

The below code snippet helps to demonstrate parallel test execution for opening the BrowserStack homepage using two methods. One of the methods performs this action on Google Chrome, whereas the other does so on the Firefox browser.

The TestNG XML file below helps to set up the parallel attribute as well as the thread count for the task.

Once we are done with the execution, the TestNG report will look something like this

A clear sign of the time savings obtained from parallelization can be seen below, in the real-time result, where we can see that parallel test execution is quicker by almost 1.5 times than serialized test execution

BrowserStack Automate can enable users to leverage the power of MBUnit to run tests across various browser, device, and OS configurations in parallel.

For test execution, the steps are as below -

Advantages and Limitations of Parallel Testing

Now that it is discussed when and how to run parallel tests, let us look at some of its advantages and limitations: 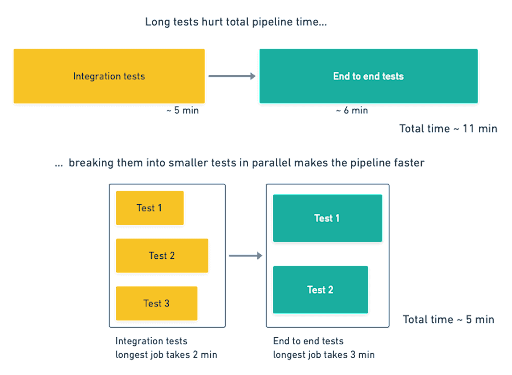 None of the advantages of parallel testing will be of any use; however if we fail to follow best practices-

Owing to the need for having access to multiple platforms and browsers to run tests in parallel, the cost of compatibility testing with parallel testing increases. Also, we may come to a point where access to all browsers and versions may not be possible. BrowserStack provides access to numerous platforms and browsers with their corresponding versions on the cloud. One can run automated parallel tests and use multiple browsers and versions.

What Is Cross Browser Compatibility And Why We Need It?

The Ultimate Guide to Backtracking