Q1. What is the Diamond problem in C#?

Ans. When two classes V and W both inherit from U, and class X inherits from both V and W, the "diamond problem" occurs. If V and W have overridden a method in U, but X does not, which class of the method does X inherit: V's or W's? As a result, there is an uncertainty in multiple inheritances in C#. It's also known as an ambiguity problem in C# because it doesn't allow multiple inheritances. It can be resolved using the interface in C# which allows multiple class inheritance, 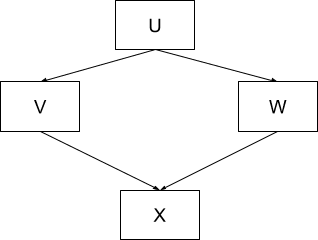 Ans. Language-Integrated Query (LINQ) is a query language that was implemented in.NET 3.5 and Visual Studio 2008. The usefulness of LINQ is that it allows.NET languages (such as C#, VB.NET, and others) to generate requests to extract data from a data source. For a particular type of data source or data format, the user does not need to learn new query languages. It is possible to reuse a query. In C#, LINQ is available in the System. Linq namespace. It includes a variety of classes and methods that can be used to run LINQ queries. This namespace contains the following elements:

Q3. List some differences between delegates and interfaces in C#.

Q4. List some differences between Class and Structure in C#.

Ans. Each thread in a multithreading environment has its own priority. The priority of a thread indicates how often it is granted access to CPU resources. When we generate a thread in C#, we always give it a priority.

A programmer can give a thread explicit priority. A thread's priority is set to Normal by default. ThreadStateException is thrown when a thread reaches its final state, such as Aborted. ArgumentException will be thrown if the value defined for a set operation is not a valid ThreadPriority value. Setting the thread priority to highest would not correspond to real-time execution since the thread priority is either determined by the process priority or parent container. The Thread. Priority property is used to get or set a value that represents a thread's scheduling priority.

Q6. Differentiate between Method Overriding and Method Hiding in C#.

Ans. User actions such as key presses, clicks, mouse movements, and so on, as well as occurrences such as machine-induced alerts, are examples of events. Applications must respond to events as soon as they occur. Interrupts, for example. Inter-process coordination is accomplished by the use of events. The events are declared and raised in a class, and event handlers are affiliated with them using delegates from the same or another class. The event is published using the class that contains it. The publisher class is what it's called. The subscriber class is another class that accepts this event. The publisher-subscriber model is used for events.

A publisher is an object that includes the event and delegate definitions. This object also defines the event-delegate relationship. The event is triggered by a publisher class object, which then notifies other objects. A subscriber is a type of object that accepts events and responds with a handler. The delegate in the publisher class calls the subscriber class's method (event handler). An event is an encapsulated delegate in C#. The signature for the subscriber class's event handler method is defined by the delegate.

Ans. A deadlock in C# can be described as a situation in which two or more processes are completely motionless or frozen in their execution because they are waiting for each other to finish. A deadlock can occur when a resource, that is shared among multiple threads, is held up and the rest of them are waiting to cause a deadlock.

Ans. Array.Clone() returns an object that contains a shallow copy of all the elements in the source array. Array.CopyTo() copies all of the current array's elements to the designated destination array.

Ans. C# introduced the async and await keywords to render asynchronous programming on the.NET platform easier. In much of the C# ecosystem, these keywords have radically changed how code is written. These keywords were created in response to the difficulties encountered when using the Task and Task classes.

To use the await keyword in the function, the async keyword is added to the method signature. It also tells the compiler to make an asynchronicity-handling state machine. An async method's return type is always Task or Task. Since it is tested by the compiler, there isn't much scope for error.

For the remainder of the async process, it generates a new Task or Task object. It assigns this new task as a follow-up to the awaited task and assigns background requirements for the continuation task.

Ans. The keyword combination, protected internal, is a member access modifier. It makes a data member accessible in any type within its current assembly. This data member is also accessible in an inherited class located in another assembly if the access is made through a variable of the derived class type.
Example:-
Accessing protected internal member within the current assembly:-

Here, x is a protected internal data member of class A. It is accessed in a member function of class B which is in the same assembly. So, this code runs correctly.

Accessing protected internal member within a derived class in another assembly :-

Ans. An anonymous method, which was added in C# 2.0, is a method that doesn't have a name. The delegate keyword is used to define an anonymous method, which the user can then assign to a delegate type variable. The inline method is another name for this method. This method allows you to construct a delegate object without having to write separate methods. Outer variables, which are the variables in the outer method, can be accessed by this method.

Q16. What is the use of lambda expression in C#?

The expression n => n * 3 is an example of a lambda expression. The => operator is known as the "lambda operator". In this example, n is an input parameter to the anonymous method, and the return value of this function is n * 3. Thus, when multiplyByThree is called with a parameter of 4, the outcome is 3 * 4, that is 12.

Q17. Is serialisation of hashtables possible?

Ans. Hashtable is a collection of key-value pairs. It is not possible to serialize hashtables as the .NET Framework does not support the serialization of those objects that implement the IDictionary interface. The XmlSerializer class will show an error each time an attempt is made to serialize a Hashtable.

C# interview questions for experienced candidates are usually designed in a way that can fetch more targeted answers and garner better perspectives. This is done to see if you're the right candidate for the role that's been offered. Here's a comprehensive set of important interview questions covererd on C#.

5 Ways To Optimize Your GitHub For Potential Employers

Once suspended, soniajm will not be able to comment or publish posts until their suspension is removed.

Once unsuspended, soniajm will be able to comment and publish posts again.

Once unpublished, all posts by soniajm will become hidden and only accessible to themselves.

If soniajm is not suspended, they can still re-publish their posts from their dashboard.

Once unpublished, this post will become invisible to the public and only accessible to Sonia Mathias.

Thanks for keeping DEV Community 👩‍💻👨‍💻 safe. Here is what you can do to flag soniajm:

Unflagging soniajm will restore default visibility to their posts.