When it comes to server architecture, which is the better choice? Monoliths or microservices? I think to answer that question, I will have to dive into each first. 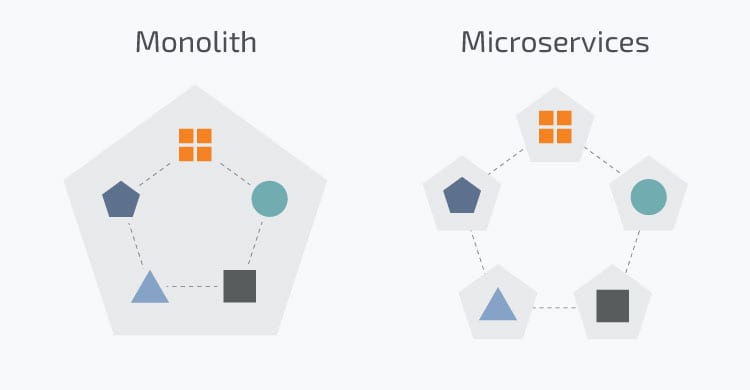 The monolith service architecture was a staple in the past, but of course due to tech advancements it is becoming out of touch. A monolith would host everything in one system - database, user interface, etc. And while this did allow for environments to have a wide variety of versatility, it was also extremely bulky and hard to change or fix if things went wrong.

So now onto the new wave... Microservices

Microservices utilize oriented API's that gives the new age of technology much more flexibility than monoliths offer. Microservices split up tasks into their own separate operations, that not only speeds up functions but makes it easier to run.

Some other advantages of microservices include

Utilizing microservices today is the correct choice in my opinion. Not only does it make maintaining work so much easier, it allows for code updates to be more reliable. That is crucial, especially when working on such large scale code repositories and systems.

Check out this video where I talk through the differences!

Creating an upvote system with React and Socket.io 🥳 🔝

solveyourstrife
How to audit a website for accessibility.
#ally #webdev #lighthouse #wave

Once suspended, solveyourstrife will not be able to comment or publish posts until their suspension is removed.

Once unsuspended, solveyourstrife will be able to comment and publish posts again.

Once unpublished, all posts by solveyourstrife will become hidden and only accessible to themselves.

If solveyourstrife is not suspended, they can still re-publish their posts from their dashboard.

Once unpublished, this post will become invisible to the public and only accessible to solveyourstrife.

Thanks for keeping DEV Community 👩‍💻👨‍💻 safe. Here is what you can do to flag solveyourstrife:

Unflagging solveyourstrife will restore default visibility to their posts.