We at SoluteLabs love meddling around with tech, especially if it’s something fresh off the oven like Flutter. Here, we were sitting around on a Wednesday noon, playing truth or dare and passing the 8-ball around, when one of our developers posed the question:

Which is your favourite application development framework?

Okay, this might not be as exciting as saying, “How many tequila shots can you down at one go before passing out?” but these are developers we are talking about.

Django. Ruby on Rails. Laravel. Ruby. Symfony. RoR.. and so on. 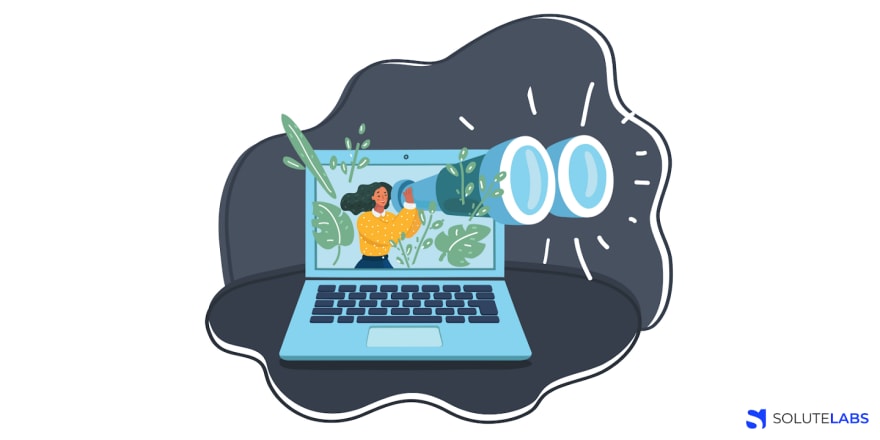 Ruby on Rails won this popularity contest, despite being one of the oldest technologies on the list.

Interest in Ruby on Rails has been waining, this much we know, but the technology still seems to be popular among hardcore developers. 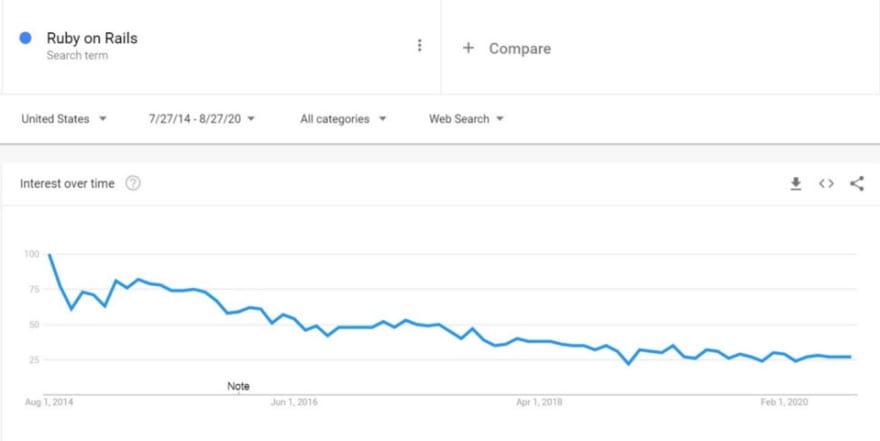 As you can see, the graph has flatlined over the past year, and considering the fact that RoR is more than two and a half decades old, this is quite an achievement.

To put things into perspective, we have almost forgotten about Psy’s Gangnam style song, which is just eight years old!

So we did a deep dive to see what keeps this RoR engine ticking, and found the key reasons why developers still feel using the technology will lead to RoaRing success (pun intended).

Here are our top seven picks:

For the first few years after the release of any new programming language, the developers take it apart and use it to build things that were unheard of before. The language becomes “trendy” there is a bunch of cool stuff coming out every week, and the excitement in the air is electric.

This was also the case with Ruby way back in 1995 when Yukihiro Matsumoto released it to the world, to create a language that was “natural, not just simple to understand.”

In 2003, an employee of 37 signals called David Hansson, made things easier for the whole developer community by creating Ruby on Rails, simply called ‘Rails.’

We won’t bore you with more Ruby history, but a little back story is required to get the proper context.

Now that you know how Ruby has been around for more than two and a half decades, the hype around it has surely died down, and what was once cutting edge has now become commonplace.

The language, in other words, has ‘matured.’

But does maturity mean the language has become boring? Hell No.

Maturity means that the Ruby code is now more stable and refined, and Web Applications written on Ruby are much more maintainable.

Good developers know that code need not be written in the hottest new framework if it becomes a pain to support for the coming years. Instead, code stability that comes with maturity directly translates to saved time, which can then be used to focus on improving the application logic-or playing more foosball. A winner all around.

A large developer pool for Ruby

A good starting point to see if a technology is “in” or “out” is to see the number of job openings the technology has.

So I ran a quick Linkedin search for “Ruby on Rails developers.”

The results? Well, see for yourself.

A whopping 31,000 openings worldwide. Now, if Ruby On Rails were a dying technology, that number is surely bound to be way lower.

A large developer pool also means that there is a large repository of Ruby gems ready to use. Ruby gems are self-contained library formats that help you carry out complicated tasks.

We wrote a detailed post on “How to create A Ruby on Rails gem,” which you can find here.

Interesting caveat: At this juncture, our HR team at SoluteLabs wants to point out an interesting fact. When scouting for talent, the HR team says that Ruby on Rails developers are particularly hard to come by. This is contrary to what the data says about RoR developers being easily available in the market, so we will have to wait and watch before we proceed further.

Let us see what else makes Ruby popular.

You have an idea for a killer app, something that is an offshoot of the current technology that you are working on, and have an investor meeting coming up in three weeks.

A — Create a complicated wireframe or a presentation that only developers can follow and which is sure to confuse your investors.

B — Create a working prototype of the app and have the investors go… Ooooohhhhhh!!

Building a Minimum Viable Product (MVP) in the least amount of time is why Ruby climbed to the top of the developer’s favourite list and is continuing to stay there.

If your answer is a Yes to most of the questions listed here, then you need to go ahead and build an MVP before you do anything else.

Ruby on Rails has a large community, as we stated above, and a tonne of gems available, which solves most of the problems developers face.

Ruby apps are easy to scale, and we can build apps much more easily for a bug user count, like GitHub.

RoR apps are easier to connect to a database, which means the technology offers a lot of flexibility.

All this leads us to one conclusion — “Think MVP, Think Ruby.”

Ruby on Rails is open-source.

What does an open-source framework mean to the end-user? Well, for starters, the source code is free to download for anyone wishing to play around with Ruby.

The RoR framework runs on Linux, which is also 100% free and is an open-source framework.

Ruby gems, which lets you add features quickly without having to develop them from scratch, also comes in handy here. The developer’s time and effort is saved, which also translates to saved costs.

Being open-source is what allows startups to compete with experienced players in the software industry.

So if you are a Microsoft Windows and Java aficionado, consider switching to Linux and Ruby and watch your savings grow.

Ruby on Rails is easy to maintain and change.

One aspect of Ruby on Rails that all developers love irrespective of their other differences is the “Convention over Configuration” principle.

Rails has a very concrete idea of how to develop a web application and defaults to this set of conventions.

This means that not only do the developers save a lot of their time that is otherwise sunk in re-coding repetitive tasks, but Ruby code is cleaner and less prone to bugs. Convention over Configuration also means that it is easier to troubleshoot problems as and when they occur.

Ruby code structured so that there is no need for developers to leave behind detailed explanations as to why they took certain coding decisions. Instead, the Rails conventions act as a shared common ground for developers to write their code.

Rails is also good for Rapid Application Development (RAD), and the framework makes it super easy to accommodate changes.

Ruby on Rails is widely supported.

As we have mentioned earlier, the Ruby on Rails community is widespread across the globe, with developers constantly pushing out new Ruby on Rails gems.

Ruby on Rails community members pride themselves on keeping the technology updated and making the Ruby code clean and simplistic.

A huge developer community means new users can quickly find solutions to any bug or coding problem they may be facing.

The RoR technology is so widely supported that an inside joke among RoR developers goes like “There is a gem for that.”

Is Ruby dying? A few drawbacks of Ruby on Rails

While we have talked about the advantages of Ruby on Rails at length, there are a few drawbacks of using RoR. Among them are:

Ruby on Rails is not Machine-learning friendly.

Remember how you see a list of Facebook friends you thought were long lost but seem to appear on your feed mysteriously? That’s machine learning optimizing your social feed based on past experiences.

When you drive from home to work, Google Maps shows traffic congestion in certain areas. That is machine learning at work too.

Machine learning has been an integral part of our lives for the past few years, without us even noticing it.

Unfortunately, Ruby on Rails is not the best technology to use when dealing with Machine Learning. Languages such as Python or even Java offer much more features to integrate with Machine learning.

Ruby on Rails is not fully flexible.

Ruby on Rails is highly opinionated and rigid. This is something that all Rails developers agree upon.

When we say opinionated, we mean that Ruby on allows you to create apps that “Rails wants you to.”

Ruby on Rails operates on some fixed rules and default code samples, which makes it difficult for developers to highlight their creativity.

If you decide to build an unconventional architecture or extended features that fall outside Rail’s conventional guidelines, you will be in for a surprise. Developers have to choose between sacrificing time or originality.

Ruby on Rails has less operational speed and is not scalable.

RoR is the go-to tool if you want to build an MVP. That much is abundantly clear. But seasoned developers say that RoR is a bit slower compared to other frameworks.

Unlike C++ and Java, Ruby on Rails requires extra time to execute the code. Rails is a speed demon, and if you need high operational speed and low resource consumption, then Ruby on Rails is a big no-no.

Speed again is a relative term, and you may not need a lot of speed if you are building an MVP.. Unless you plan your app to go viral and be used by hundreds of millions of users, speed is not generally a dampener.

But does your app need to scale quickly? Ruby language poses a drawback here too.

When Twitter moved out of Ruby on Rails to Scala, the framework’s inability to scale was seen as a major drawback. However, many developers would argue that each element in the server’s system architecture is responsible for scaling, and not just the web app’s backend.

But does it mean RoR is not completely suitable when building an app that scales? Not exactly. Shopify was able to scale and support over 500,000 businesses at a time using Ruby on Rails.

Who uses Ruby on Rails today?

Ruby on Rails is still going strong, with a host of companies swearing by the technology’s robustness and flexibility.

Here is a look at some of the big names using Ruby: 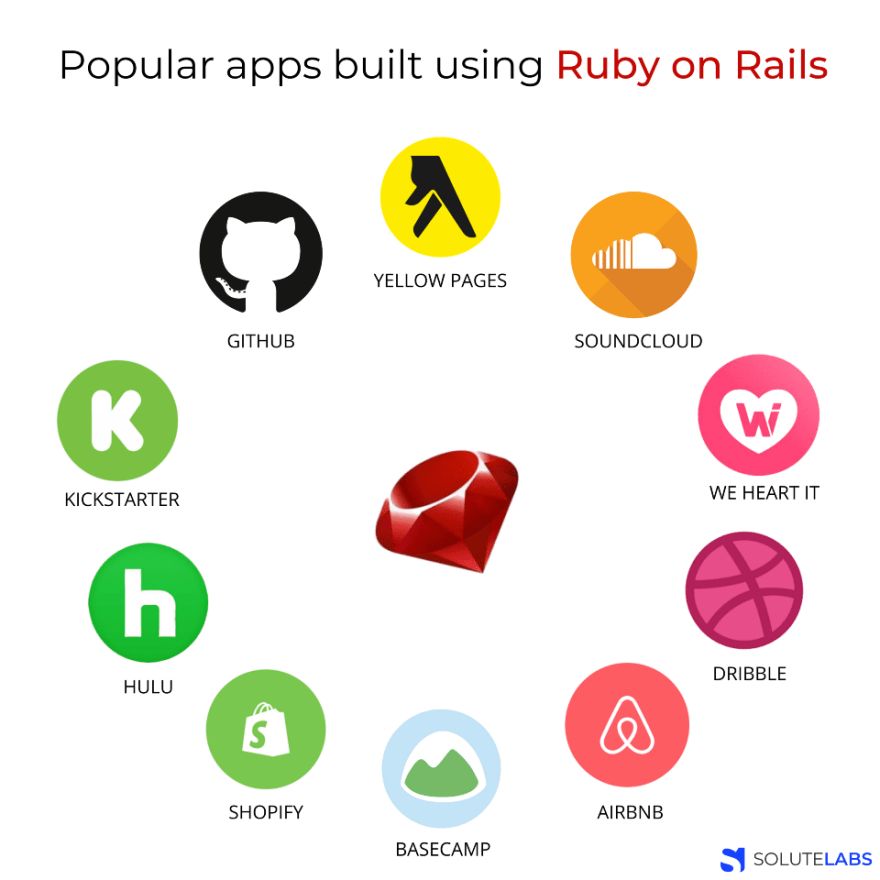 Both Ruby and Rails are scheduled to release updated versions this year, to address many of the pain points the developers are facing.

Ruby 3, aimed for a Christmas 2020 release, aims at making the framework faster, improve memory and CPU performance, and make Concurrency a cornerstone in development.

Rails 6, released last year, offers better text-editing features with Action Text and faster reply rates with Action Mailbox, and the ability to use multiple databases that make the app that much more secure.

As you can see, Ruby on Rails has been here for long and looks like it is here to stay. If you want an app developed using Ruby on Rails, remember to give SoluteLabs a shoutout.

My productivity setup ( VS Code )