Containerisation is crucial in an application development environment. How can you manage application modules without containerization? It is simply impossible! Containers improve efficiency, portability, consistency, and maintenance overhead compared to traditional technologies.

Containers provide a much easier method to deploy, scale, and debug applications. When more microservices and dependencies are added, containerization makes it easier to add instructions to the Dockerfile. The container engine is responsible for downloading and installing all dependencies required to run the application.

When DevOps is gaining momentum everywhere, container management becomes a critical part of project development. Docker dominated the market for quite some time, but Podman now gives it tough competition.

Docker provides a system-agnostic approach that can create containerized applications across any platform. Podman is a rootless and daemon-less container built explicitly by RedHat to make it better than Docker. Non-root users, too, can use Podman container-based applications.

Let us explore the differences between Podman and Docker here to understand the right choice for any project. Podman V Docker comparison will help developers to choose the right containers for improved time to market and application efficiency.

Podman commands are created to mimic Docker commands so they work seamlessly. The modular architecture and rootless design make granting different privilege levels to multiple users easy. Image-building commands are also similar to that of Docker. Podman takes an edge over Docker when it comes to running commands. The Podman run command is identical to that of Docker. The difference is that Podman comes integrated with systemd out of the box. Systemd can efficiently run within a container by default. Podman supports Docker compose for running multi-container applications.

Docker commands are intuitive and straightforward. Daemon always requires root privileges. It is also possible to run Docker rootless after installing specific storage drivers and additional packages. Using build context and dockerfile, images can be quickly created. For running containers, Docker Swarn is used for management. It helps in the deployment of scalable applications without relying on dependencies. A cluster of Docker nodes can be run using Docker Swarm. Docker Compose automates container initiation and management, making it easier to use with multi-container application environments.

Creating, deploying, and managing containers are pretty straightforward with both Podman and Docker.

Regarding security, Podman works better than Docker, thanks to its fork-exec architecture. It allows easy and accurate recording of user modifications as it continuously monitors system files. Audit logging is made easy with Podman. Rootless containers add to the security features of Podman. It allows efficient access control as specific user privileges can be granted. Administrators have overall better access control to maintain and manage critical server components.

Docker provides secure running with any client-server-based architecture. It enables a more straightforward implementation of security practices. Even though non-privileged users can run containers, it offers better security. Generally, it is recommended not to run containers in privileged mode. Using SELinux, AppArmor, and GRSEC dramatically helps improve the security of Docker containers.

Podman uses fork-exec model architecture. It doesn't restrict itself to the client-server model. There is no need for a daemon to keep running in the background. There is a primary Podman process that has containers called child processes. The main component is a container. Similar to Kubernetes Pods, Podman can create pods, a group of one or more containers sharing the same resources. A pod will always have the main container and a supporting sidecar container.

Podman provides faster startup thanks to its daemon-less structure. At any point in time, the host system stays protected. However, when it comes to overall building, Docker is a winner. The building part relies primarily on image building. Since Docker has native image building, it can build at least six times faster than Podman.

Podman Vs. Docker Side By Side 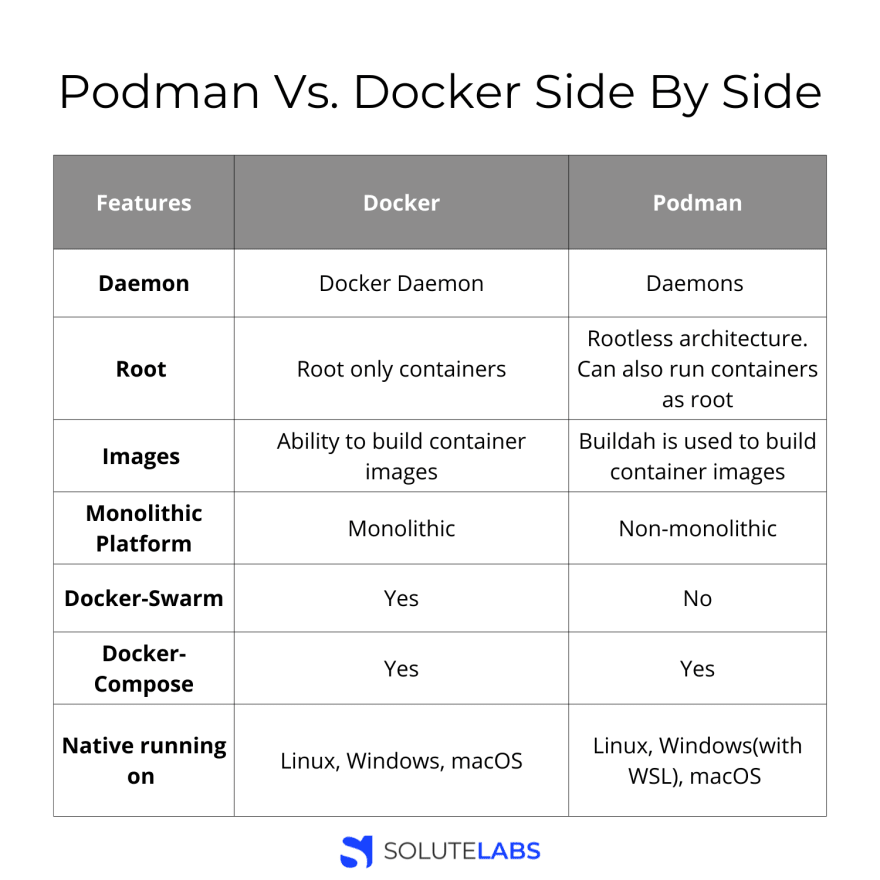 Differences between Podman and Docker

Podman is basically built on Docker, adding features that Docker lacks. At the same time, Podman also doesn’t have certain Docker features because of the significant difference in the architecture.

Both Podman and Docker are OCI compliant. They can be used together in a single project. Development machines can use Docker, while Podman is useful for dev, inv, and prod environments for the same project.

Developers already know Docker because the client-server architecture and Docker modules are trendy. Podman developers have a learning curve where they must learn to include Docker, and Kubernetes commands as and when necessary.

The following are some of how Podman and Docker are distinctly different:

Podman is a daemon less, while Docker has containerd daemon thread. Podman uses conman to pull images from repositories. Conman has a lower memory requirement compared with contianerd.

Docker is self-sufficient when it comes to image building. Podman, on the other hand, needs Buildah for that.

Podman supports pods while it is not available with Docker.

Migrate from Docker to Podman

Docker’s major flaw is its single point of failure. Building containers ultimately lead to security vulnerabilities because only users with full root authority can conduct Docker operations. For improved security, migrating to Podman from Docker is quite simple.

The first step is to install Podman. There is no need for a daemon process creation with Podman. You can use the commands for Docker with Podman. The images built using Docker are also compatible with Podman. Podman starts storing its images and containers in a different location once you install buildah.

The main reason for the Podman Vs Docker comparison is to choose the right type of container management system. In any project, the choice of technology depends on the project's demands.

Docker is well suited for projects with developers who are experienced in existing technologies. The widespread use of Docker is a significant reason many developers choose it. It is a well-documented tool, and almost every issue is already addressed. Even if you run into any new problems, the extended Docker community on the internet can help you find a quick resolution to all issues. Docker Swarm provides excellent container orchestration that is not available elsewhere.

Podman is well-suited for projects that focus on security. It is also a great choice when you plan on moving to Kubernetes later. When the project roadmap has pods, it is best to start with Podman. It has almost all the features of Docker with an added layer of security.

Prepare .NET core Microservice to be monitored by Kubernetes