Let me start with a disclaimer that I am very new to Arduino. Despite having an Electrical Engineering degree, I had never really played around Arduino until very recently. The code referenced in this post was handed down to me by my colleagues at Solace.

Recently, I presented for the first time at Solace’s meetup in New York. For this meetup, we decided to cover a specific feature of Solace PubSub+ which we thought our users and prospects would find interesting: Replay. PubSub+’s Replay feature is relatively new but extremely powerful and one that many users have welcomed. 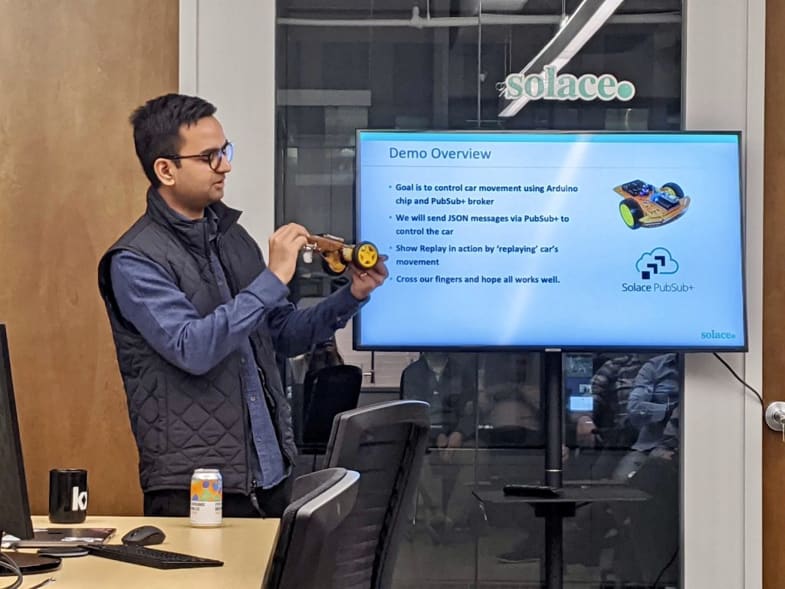 Food and drinks were a no-brainer. We got a bunch of delicious pizza and lots of craft beer (lagers, pilsners, sours, and even rosé cider!).

However, having a cool demo for your meetup requires a lot of planning. We could have easily demoed Replay via PubSub+ admin UI. While it would have gotten the point across, it wouldn’t have been visually appealing. After a lot of discussions, we decided to use a car powered by Arduino and controlled by PubSub+. The idea was simple and visually appealing. We would build an Arduino-powered car and control it by sending MQTT messages via PubSub+. Then, we will replay those messages and show the car repeating its earlier steps (this is when the crowd goes “oooh aaaah”).

In this post, I would like to show you how you can build your own Arduino-powered car and control it with PubSub+ Event Broker. Let’s get started.

Here are the steps to achieve our goal:

Assemble Car from the Car Kit

** ** I don’t want to document all the steps I followed to assemble the car because, to be honest, I was just following instructions from other blogs. The instructions that came with the kit were not very helpful and very difficult to understand. 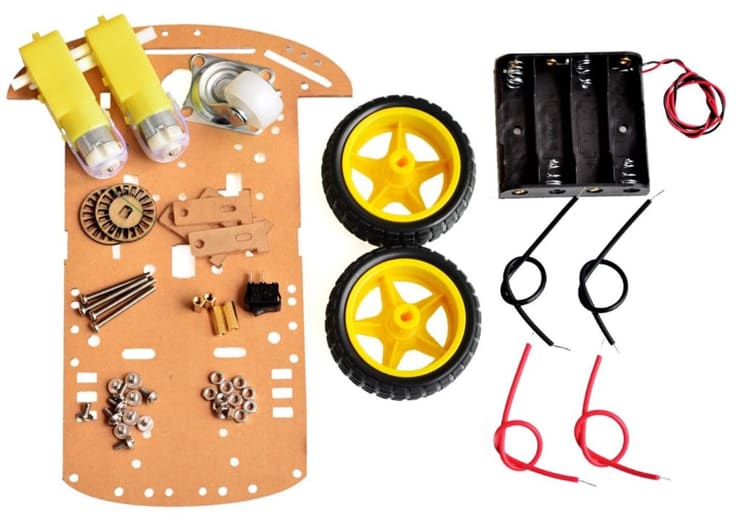 You can buy the kit from Amazon. More details about the kit can be found on this site. This YouTube video was very helpful and I highly recommend using it as a starting point. 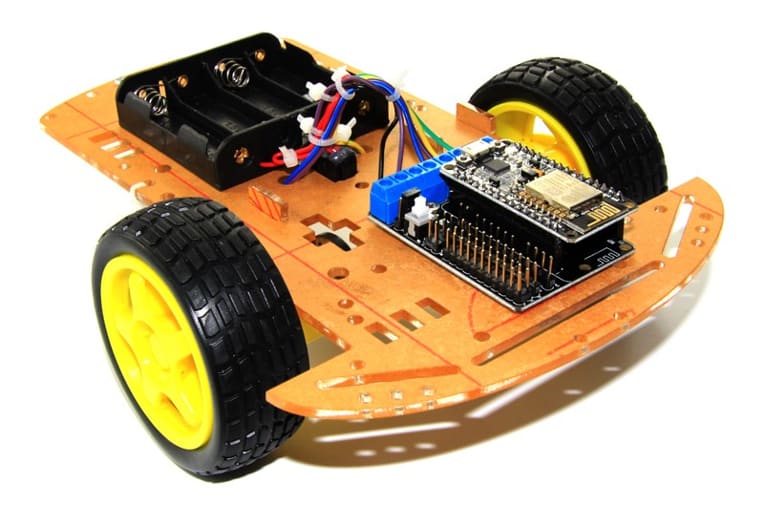 Once you have the car assembled, it is time to upload code to the Arduino chip. You can find the code on Solace’s github. In the repo, you will find car_demo/arduino/src/car_kit.ino which is the code that you will need to open using Arduino IDE and upload it to chip. Note that the following instructions are meant for the ESP8266 chip only. 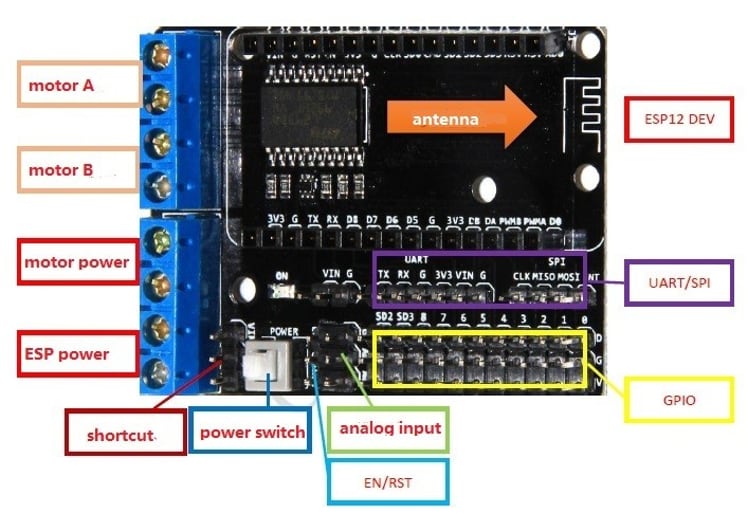 To be able to upload code to the chip, you will need to download and use the Arduino IDE. I recommend downloading the software instead of just using the browser version. Once installed, open car_kit.ino in the Arduino IDE.

Before you can upload the code, you need to modify the code slightly to get it to work for you. You need to make a minimum of two changes:

Modify the following lines by entering your Wifi details:

Modify the following lines by entering your MQTT broker details:

You will need an MQTT broker running so you can enter the relevant connection settings. Of course, I would recommend using Solace’s PubSub+ Event Broker which supports MQTT. You can spin up an instance via Solace Cloud for free.

Before uploading this code to your Arduino chip, you will need to configure your IDE to work with the specific model of your chip as well as install PubSubClient and ArduinoJson libraries.

Arduino IDE supports a lot of ‘boards’/chips out-of-box but sadly, doesn’t support the ESP8266 chip. So, we need to add it manually to Arduino’s Board Manager. To do so, go to Arduino > Preferences and enter the URL: http://arduino.esp8266.com/stable/package\_esp8266com\_index.json 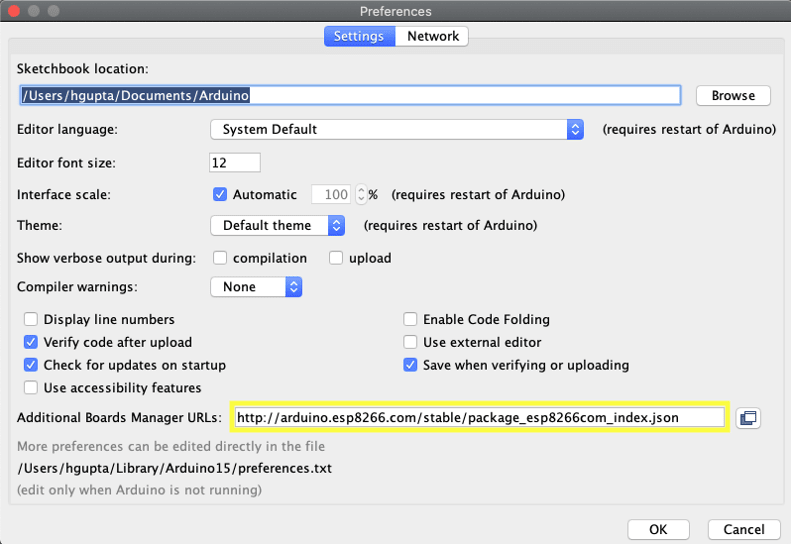 Now, go to Tools > Boards > Boards Manager , and search for ESP8266. You will now see ESP8266 board by ESP8266 Community. Click on Install to install it. You can also choose to install a specific version if needed. We are using 2.6.3 currently.

Now, you are ready to install PubSubClient and ArduinoJson libraries. You can easily do that by going to Tools > Manage Libraries and simply searching for them and installing them.

Once you have these libraries installed, you are ready to upload the code to the Arduino chip. Plug your chip into your computer via Micro USB cable. You will see a blue LED light as soon as you plug in the chip. If you don’t see the light, try toggling the white switch on the chip to turn it on.

Finally, go to Sketch > Upload to upload the code to your chip.

You can now go to PubSub+ UI and send some sample messages to your chip to control the car.

Getting the Chip ID

Here is the output of my Serial Monitor:

Here is some good documentation on how to use Arduino’s Serial Monitor.

The payload of your message should be in JSON format and should include three values:

Negative power will make the motor turn in the opposite direction compared to positive power. For example, l:100, r:100 and d:500 will make the car move forward for 500 milliseconds. If you want to turn right, you can set l to 0 and if you want to turn left, you can set r to 0, respectively. You can control how far the car drives by adjusting the duration (d) parameter.

Here is a sample payload: 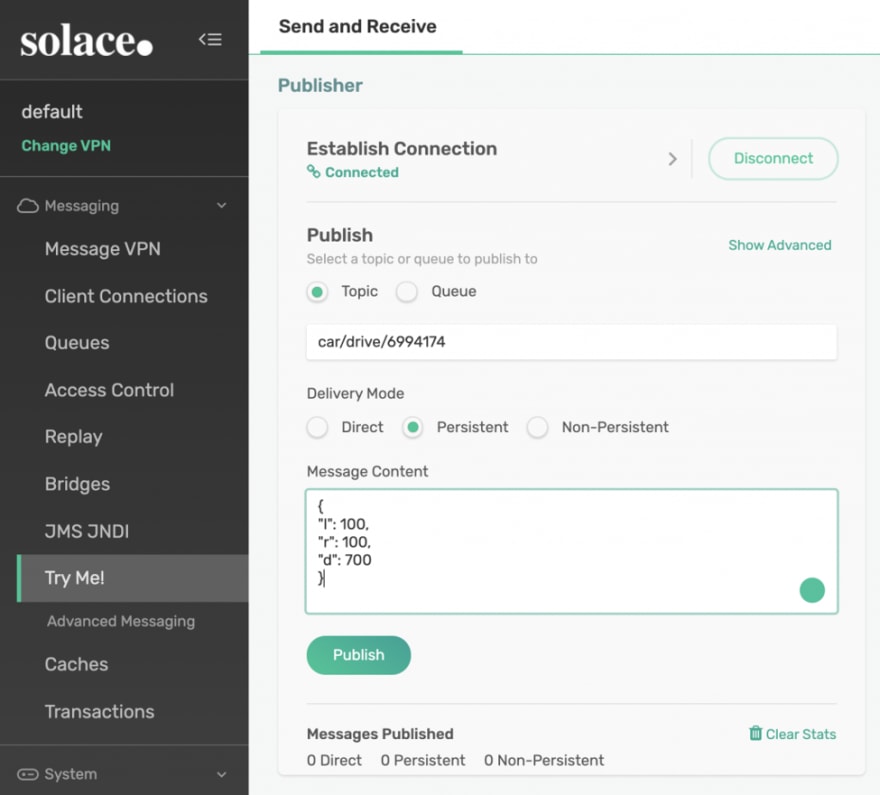 Of course, you can build a nice shiny app or program a joystick to send such messages. It’s up to you how creative you want to get!

Now that we have our car running, let’s take a step back and look at the architecture of our setup:

On the left side, we have our assembled car powered by an Arduino chip and subscribing to an MQTT topic with QoS 1. You can see where we specify the subscription in the code:

On the right side, we have our Controller UI which is simply the javascript Publisher app on Try Me! tab on Solace Cloud.

That’s pretty much it! I hope you found this post useful. For more information, visit PubSub+ for Developers. If you have any questions, post them to the Solace Developer Community.

How to make a network cable

How to Set Static IP Address on Linux

How to launch an EC2 instance

Once suspended, solacedevs will not be able to comment or publish posts until their suspension is removed.

Once unsuspended, solacedevs will be able to comment and publish posts again.

Once unpublished, all posts by solacedevs will become hidden and only accessible to themselves.

If solacedevs is not suspended, they can still re-publish their posts from their dashboard.

Once unpublished, this post will become invisible to the public and only accessible to Himanshu Gupta.

Thanks for keeping DEV Community safe. Here is what you can do to flag solacedevs:

Unflagging solacedevs will restore default visibility to their posts.